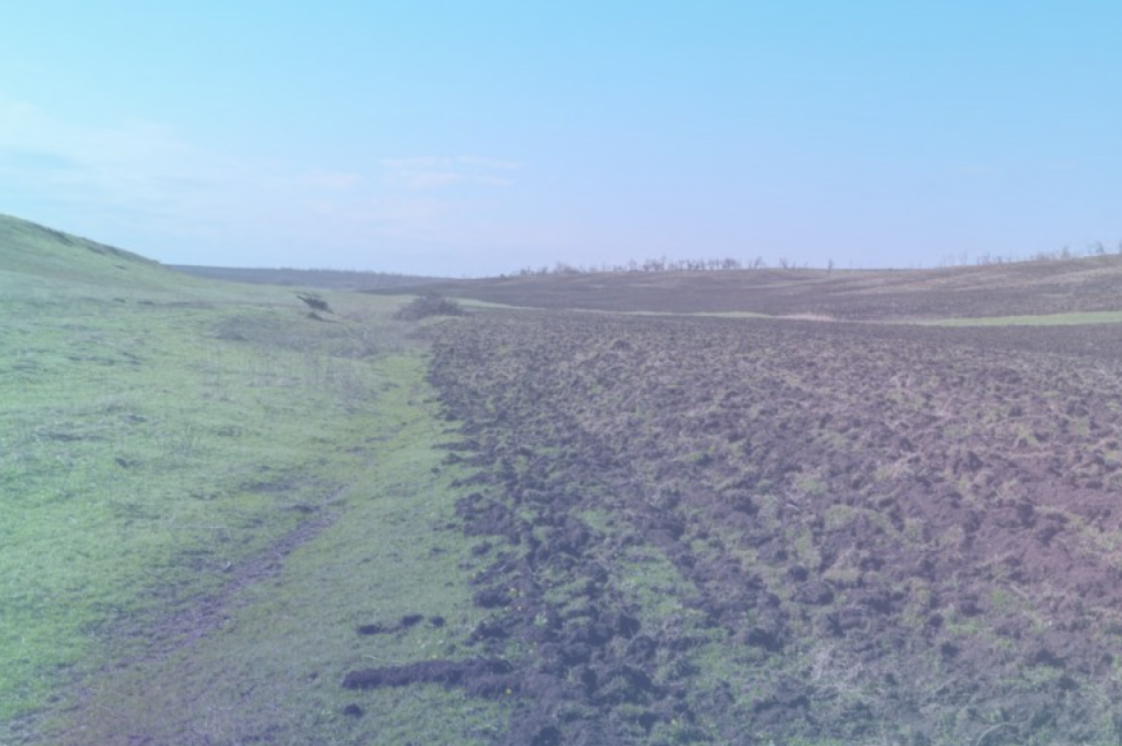 The beginning of the third millennium was marked by another exacerbation of global environmental problems and awareness of the vital need to preserve the natural environment for human existence. This awareness was embodied in increasing public awareness of environmental issues and, in particular, in expanding the network of protected areas.
Ukraine is also keeping up with the world trends. According to the  Ministry of Environmental Protection and Natural Resources of Ukraine 2020 data, compared to 2010, the area of ​​nature protection fund (NPF) in Ukraine increased by 21.9%, as of 01.01.2020, the percentage of protected areas in Ukraine was 6.8% of the total area of the country. (Fig. 1)

Fig. 1. Dynamics of creation of territories and objects of nature reserve fund in Ukraine for 2000-2019 (in thousand hectares)

And this is not surprising, Ukraine, compared to most European countries, has a better land resource potential, and in recent years the country is headed in the direction of an agrarian state. And if we keep in mind the recent opening of the land market, it becomes clear that every piece of land suitable for agricultural use is the object of increased attention. Primarily as a potential means of production and a tangible asset.

Thus, in these circumstances, not only the further expansion of the network of protected areas is, to put it mildly, a difficult task, but also the preservation of the present lands of the NPF is becoming more important than ever.

To sound the alarm

So far, time and again in various regions protected lands are devastated. Environmental workers and activists are left to sound the alarm, drawing attention to the problem in the media and social networks, filing lawsuits, trying to recover damages… Thus, the media periodically receives news about cases of land ruin within the NPF and the destruction of natural ecosystems.

Here are just a few: 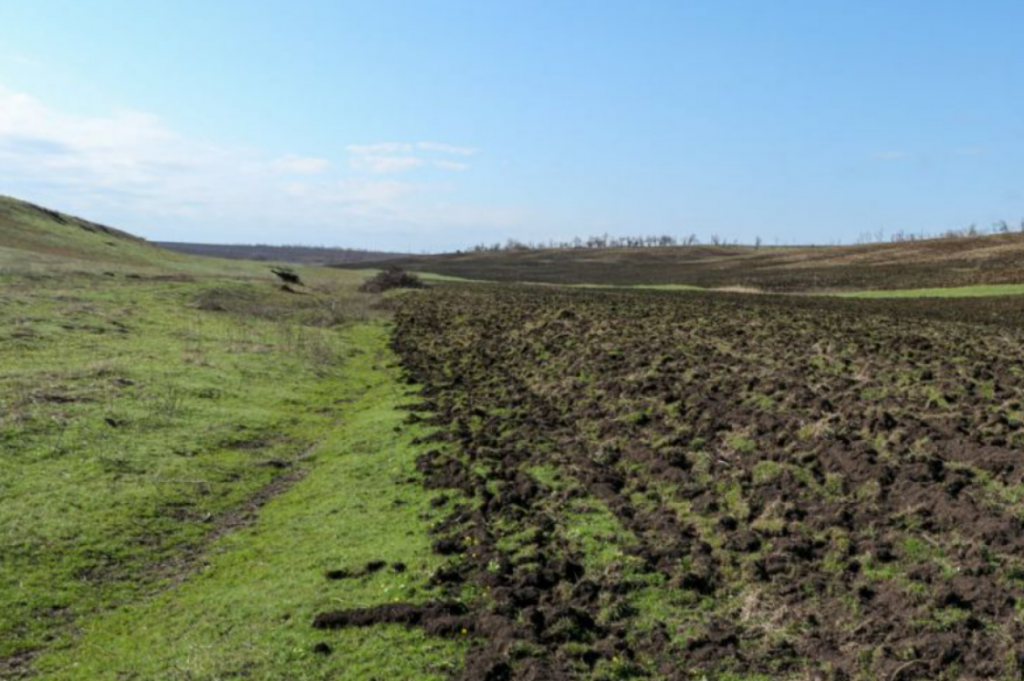 Fig. 2 Plowed steppes of Meotida Park. The steppe ecosystem destroyed will not be restored in its original for decades.

While the circumstances are studied and evidence gathered, while the courts and appeals are on the way – the crop is grown, harvested, and the profits are received. That is why, in fact, each of the major NPF facilities today faces the problem of illegal plowing. But is it always about illegal seizure of land?

In fact, unfortunately, mistaken plowing or illegal seizure of land is not the worst problem. It is worse when illegal plowing is carried out, from the point of view of agricultural producers, on legal grounds, when supported by relevant cadastral documents. Such activities are much harder to stop, and it can take years.

How is that possible?

The problem, as it turns out, is the imperfection of legislative mechanisms for establishing the boundaries of NPF objects and implementing legislation in practice.

One of the victims of illegal, and even worse – “allegedly legal” plowing is the National Natural Park of national importance “Pyryatinsky”. Its example is typical of the current situation in Ukraine.

Let’s figure this out

The park was established in December 2009 in accordance with the Decree of the President of Ukraine in Poltava region. The basis of the park were natural and slightly changed landscapes of the Udai River and adjacent territories. In 2016 the object of the Emerald network was created on the basis of NPP Pyriatinsky, the area of the object coinciding with the area of ​​park at 84%.

Fig. 3. Fragment of the biotope map of NPP “Pyriatynsky”

In Figure 3 we see a fragment of the map of habitats of the park. And here is the same area in the Landsat 8 space image from May 1, 2021. 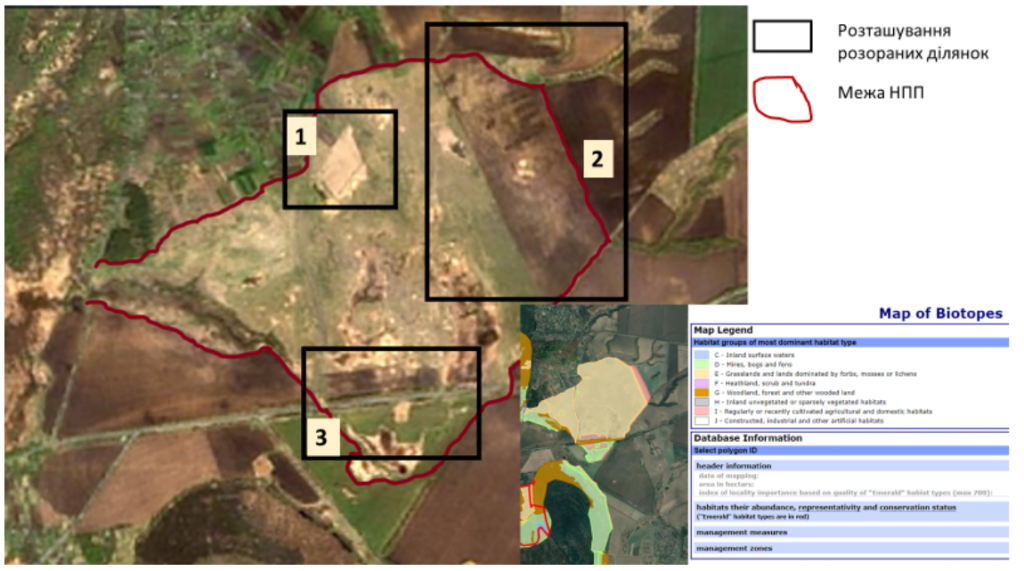 Fig. 4. Plots of plowed soils are located on the meadow lands of NPP “Pyriatynsky”

Is this a violation of the law?

On one hand – definitely so, because these are the lands of the NNP, half of which are given to the Park’s permanent use, and on the other hand…
Let’s look at the cadastral division of the same territory, reflected on the public cadastral map of Ukraine and compare it with the designation of the territory of the NNP on the same map. 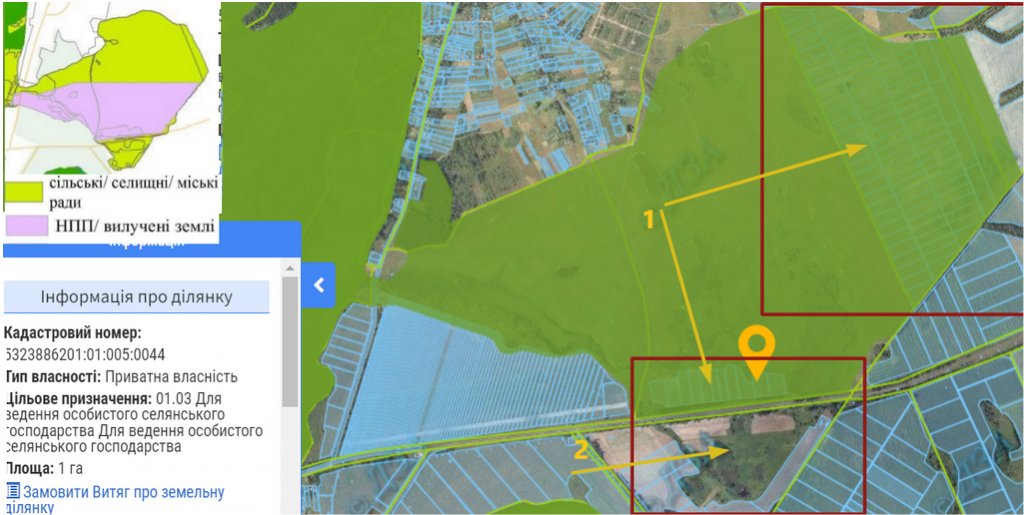 1- Private parcels within the NP
2- The territory of the NP “Pyriatynsky” emerald object with a plowed area
Fig.5. “Disputed” territory of NP “Pyryatynskyi” on the Public Cadastral Map of Ukraine

It turns out that only plot 1 and the southern part of plot 3 were plowed completely without legal grounds. The northern part of plot 3 with an area of ​​10 ha and plot 2 with an area of 84 ha are divided into plots that, according to the cadastral map, are intended for agriculture and are privately owned. And private land in the southern part is located on lands provided by the state NPP “Piryatinsky” for permanent use with seizure from previous owners.

How long have these plots been used for agricultural production?

A retrospective analysis of satellite images (made easy by Google Earth) shows that since the creation of NPP, plots 2 and 3 and partly used by locals for gardens and hayfields (Fig. 6a). And only plot 1 was plowed for the first time in 2020. The lands transferred by the state to the Pyriatynsky National Park in 2009 continued to be used by local residents as hayfields, which is allowed in the regulated recreation area (Fig. 6b – 2014). 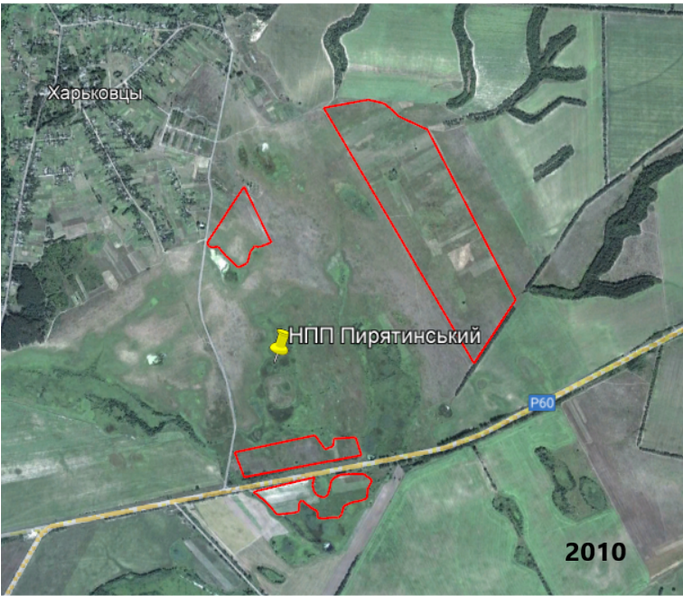 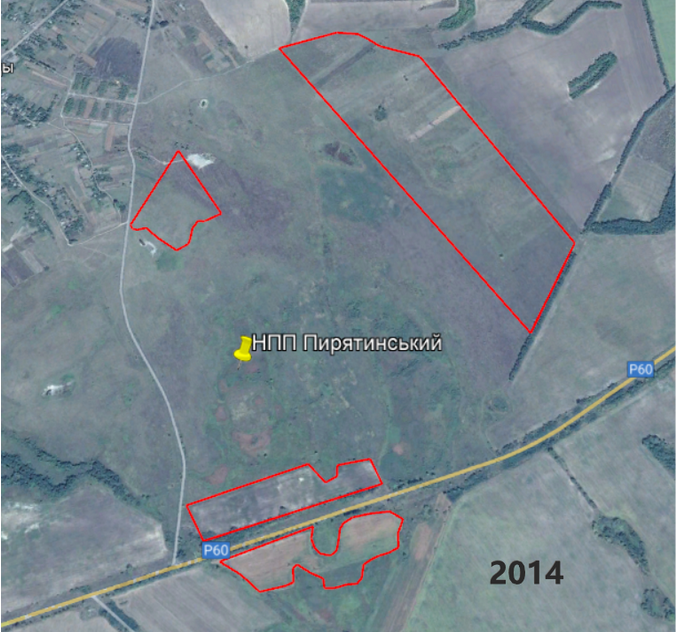 Fig. 6. Comparison of satellite images of the territory of NPP “Pyryatynsky” in 2010 and 2014. Red outline – currently plowed areas

So, in response to accusations from the Park of illegal plowing, landowners are demonstrating legal documents. And what is the Park’s response?

The park of national importance has not had cadastral numbers of plots for 12 years. The territory is reflected in the cadastral map as a separate layer, which “does not contain official information of the State Land Cadastre and is informative.” Accordingly, this “information layer” contains numerous errors, which are another argument to justify the abuse: “How do I know that this is a protected area? It hasn’t been mapped! ”

Is there no land management project? No cadastral numbers? No boundaries in the field? – So, there are no park boundaries.

And this is a common problem. According to Konstantin Yalovy, for more than 70% of nature protection sites there are no boundaries in the field. Depending on the type of facility, the central and local authorities are responsible for the development of land management. But the processes is often stalled, due to both subjective (personal interest of officials) and objective reasons (lack of funds or property disputes).

According to the legislation of Ukraine, National Natural Parks are created by decrees of the President of Ukraine. The decree indicates the area where the NNP is created or which area its territory is expanded to. Plots falling within the territory of the NNP must be approved in accordance with the procedure for developing a land management project for the organization of the NNP (the above-mentioned procedure in accordance with the Law of Ukraine “On Land Cadastre”). The decree separately instructs the Cabinet of Ministers of Ukraine to properly formalize the right to use land and develop relevant project documentation.

Development of land management projects for the organization and establishment of boundaries of the nature reserve fund is carried out in accordance with the Procedure approved by the resolution of the Cabinet of Ministers of Ukraine № 1094 of 25.08.2004.

If you are interested in the legal aspects of the use of NRF lands, I advise you to read the manual “Nature Reserve Fund: Land Issues” (2017)

However, as we can see, in practice everything is a bit more complicated. There is a decree, there are instructions, there are borders theoretically, but in practice – not at all.

In such conditions, the lands of the nature reserve fund cannot be considered protected by the state today. Their territory, as we have seen in the example of the Pyryatynsky National Park, may not only be self-occupied by violators of the law, but may suddenly become someone’s private property.

The reasons for such “errors” can be both plain errors and lack of spatial information, as well as imperfect legislation, inconsistencies in the activities of certain agencies, such as the Ministry of Environment and the State Geocadastre, inertia of the system, lack of funds… Abuse cannot be ruled out, because today the land is a tidbit, and the estate in the protected area is a cherished dream of a corrupt official.

There are plenty of reasons, the result is the same – with the formal expansion of areas there is a widespread attack on the last surviving wildlife sites. Nature, without which we can not talk about a healthy nation, longevity, prosperity and sustainable development.

But protected borders will be extremely difficult to protect if they continue to exist only on the pages of scientific reports.

But protected borders will be extremely difficult to protect if they continue to exist only on the pages of scientific reports.

To conclude, there is good news:

The allocation of funds from the state budget for the development of nature reserve land management projects has begun. We hope that this is only the beginning, and in the future the case will be brought to an end and we will be able to speak confidently about the state’s protection of the lands of the nature reserve fund.