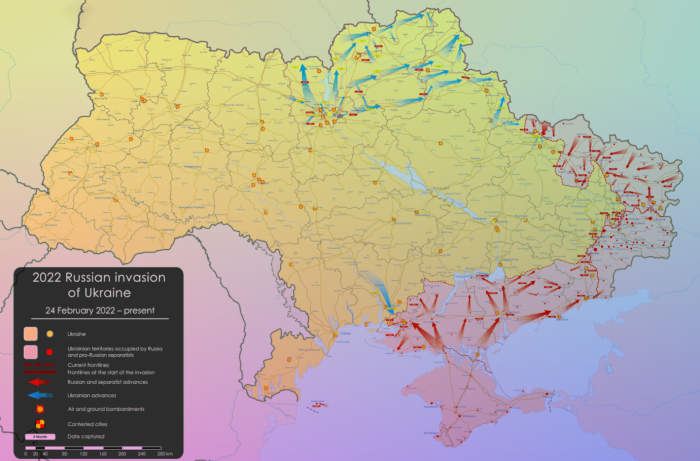 We have collected a series of maps and resources related to the Russian invasion to Ukraine. Feel free to add more links in the comments below.

ukraine.bellingcat.com – This map plots out and highlights incidents that have resulted in potential civilian impact or harm since Russia began its invasion of Ukraine. The incidents detailed have been collected by Bellingcat researchers. Included in the map are instances where civilian areas and infrastructure have been damaged or destroyed, where the presence of civilian injuries are visible and/or there is the presence of immobile civilian bodies

russian-ukraine-monitor Eyes on Russia: The Russia-Ukraine Monitor Map – a crowdsourced effort by the Centre for Information Resilience as part of the ‘Eyes on Russia’ project

ecozagroza.gov.ua – map of environmental threats by the Ministry of Ecology and Nature Protection of Ukraine.

reukraine.shtab.net map of destructions is an online map of Ukraine, which shows the completely or partially destroyed objects of social, transport and housing infrastructure as a result of the invasion of the Russian Federation on the territory of Ukraine

Tracking the Russian Invasion of Ukraine by the New York Times

Russia’s invasion of Ukraine in maps by Financial Times

Institute for the study of the war – Assessment maps

Institute for the Study of the war – Interactive Map: Russia’s Invasion of Ukraine