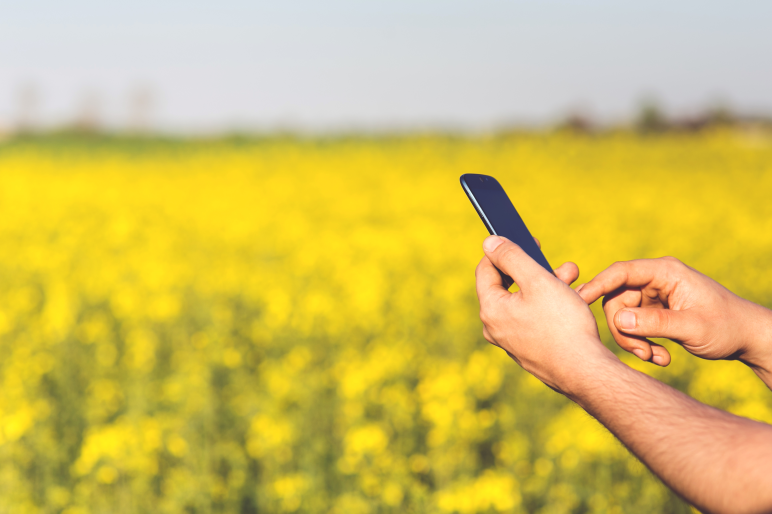 In this post you will learn about several mobile GIS and data collection apps, some of their strengths and weaknesses.

Everyone who deals with geodata may have also encountered data collection in the field. Traditionally field data collection was performed using paper forms, paper maps, theodolites, compasses, circumferentors and so on. Now we can use GPS sensors, and replace paper with digital forms on mobile devices.

What are geodata? In most cases these are points with attribute information. More rarely geodata are lines or polygons.

Below I will review a number of geodata collectors for Android™ platform. I only pick out the solutions I have dealt with myself, hence all written below is my own experience, no more. Furthermore, I will only consider free or low-cost applications and ignore solutions requiring corporate license.

Originally Open Data Kit (ODK) was made as a tool for conducting of sociological surveys.

Briefcase – tools for data transfer from Collect and Aggregate.

In my opinion this ‘tool diversity’ is too intricate, especially for new users. That’s why ODK has produced a lot of derivative applications with simplicity as the main goal. Below we will look at two of them: KoBo Toolbox and GeoODK.

The only spatial data type that can be collected by ODK is the current location point (GPS coordinates in WGS84 reference system). It is impossible to collect remote points or to select points on the map.

The main advantage of ODK (and its derivatives) is its extreme form flexibility. You can create various fields: text, numeric, integer, date, time, select-one, select-multiple, logical, barcode, coordinates, photo or video. And then set a skip logic that enables to avoid painful scrolling of unnecessary fields in mobile device and save a missing field time.

KoBo Toolbox was created as a fork of ODK aiming to be easy-to-use.

This app only contains three tools: form builder, mobile data collector and aggregator. Initially form builder and aggregator worked as Java-based desktop tools alone, but now they are merged and can only be used as web-apps. After free sign-up in KoBo website a user can create fill-in forms, upload these on mobile devices, than aggregate the filled forms and even make simple visualizations of results in the web-interface. Mobile collector works identically to ODK (figure 1) ; they even use the same working directory in mobile device (that’s why KoBo Collect cannot be used at the same time with ODK Collect!). 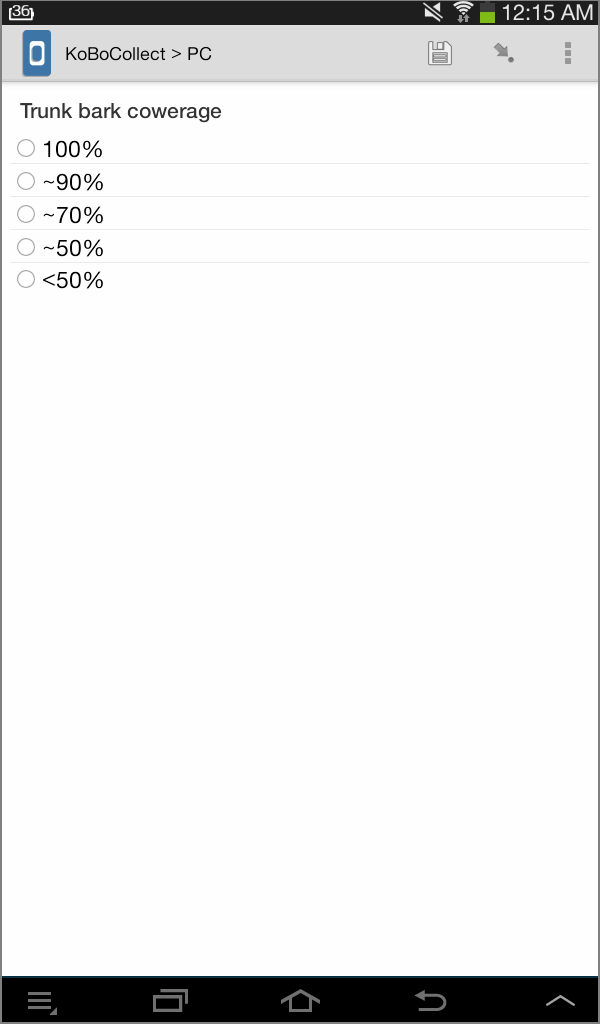 Besides KoBo can be used not only as a standalone app, but via web-browser as well (tested on Firefox for Android, Google Chrome for Android and Safari for iOS), also when you are off-line (figure 2). This makes it almost cross-platform. User documentation is concise and well-illustrated.

Summarizing, KoBo Toolbox is an ‘ODK on steroids’, simpler and more elegant than its parent. 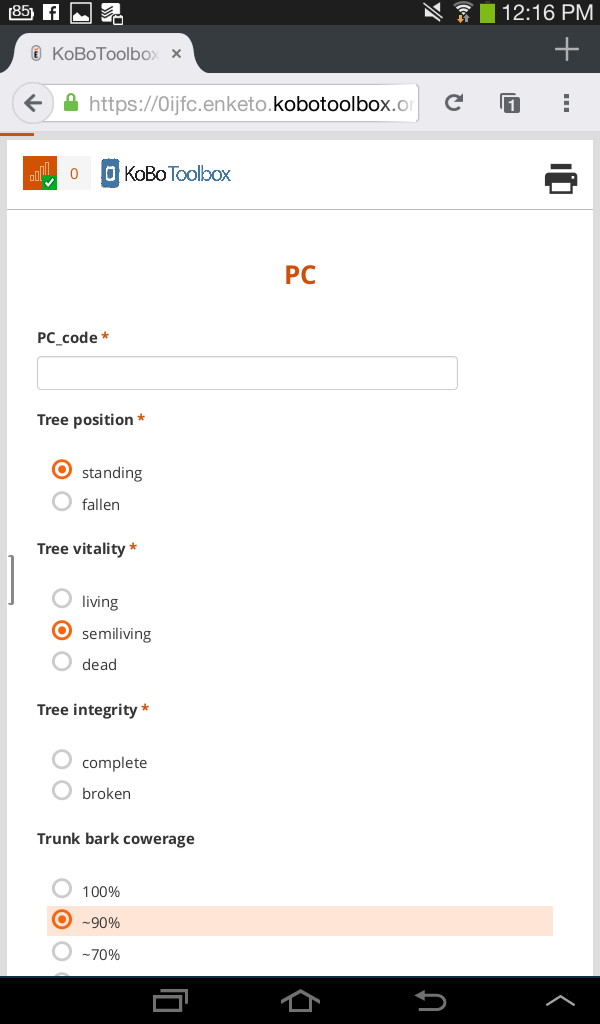 GeoODK has a similar to ODK functionality and consist of a lot of tools. Additionally, it can display point items on an online or offline raster map (figure 3). For preparing offline maps MapBox TileMill is used. Output formats are CSV and KML, but GeoODK offers special resources for data conversion from native format  to shapefiles. 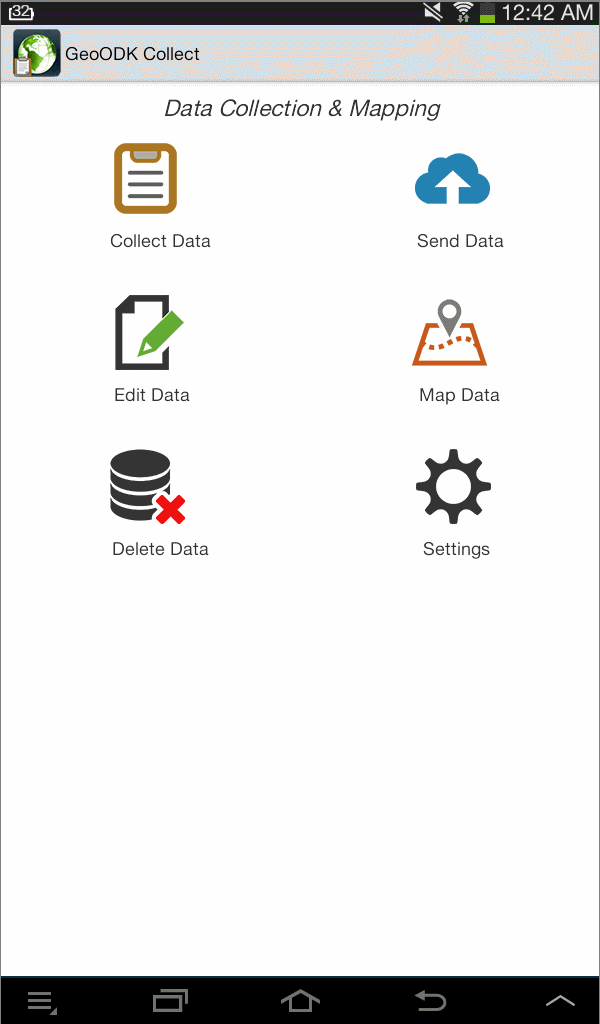 It is a very easy but powerful tool, however, the free account plan places significant limitations (100 MB for raster and media, 10.000 vector features, only public maps and, the worst, only one mobile device for data gathering).

MDC is in general similar to GeoODK but unlike the latter it offers a single and clear web interface for all stages of data creation, edition and processing. Similarly to GeoODK MDC isn’t able to add features to the map directly, only via form from current GPS location (figure 4). Offline map cache creator ships ‘out of the box’. 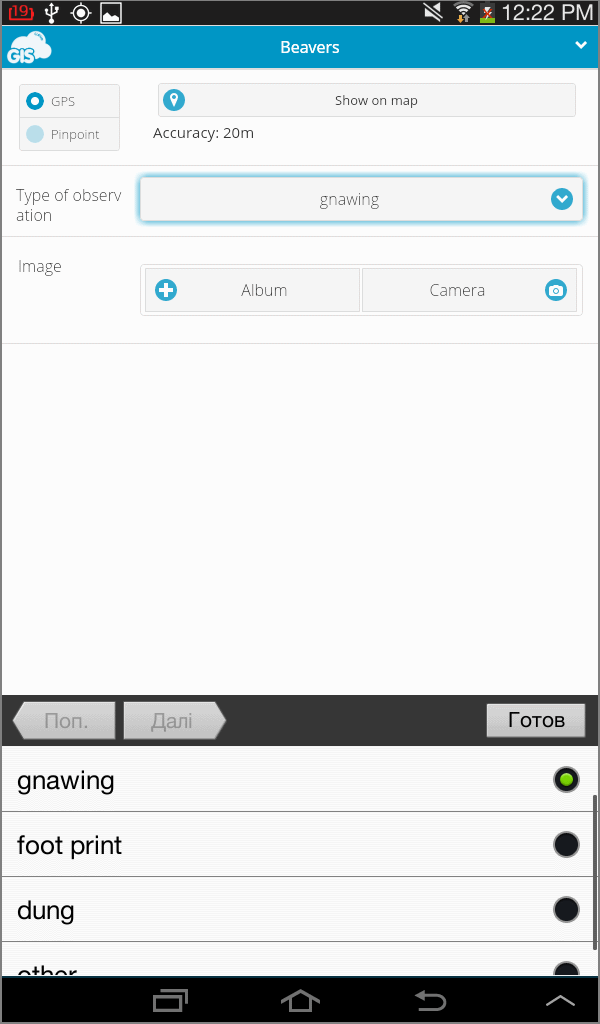 There are other ways to use MDC rather than collector for GIS Cloud. For example, here the author describes how to use MDC as collector for QGIS Cloud. It is hard to overestimate the power of QGIS but unfortunately I cannot say that QGIS Cloud is a very stable tool. Maybe it is only my issue.

NextGIS is a complex solution for geospatial data collection, storing and processing. It consist of web, desktop (clone of QGIS Desktop) and mobile parts.

The latter is an Android application to work with geodata in a field. NextGIS Mobile has a modern and intuitive user interface adapted to any screen size (figure 5). 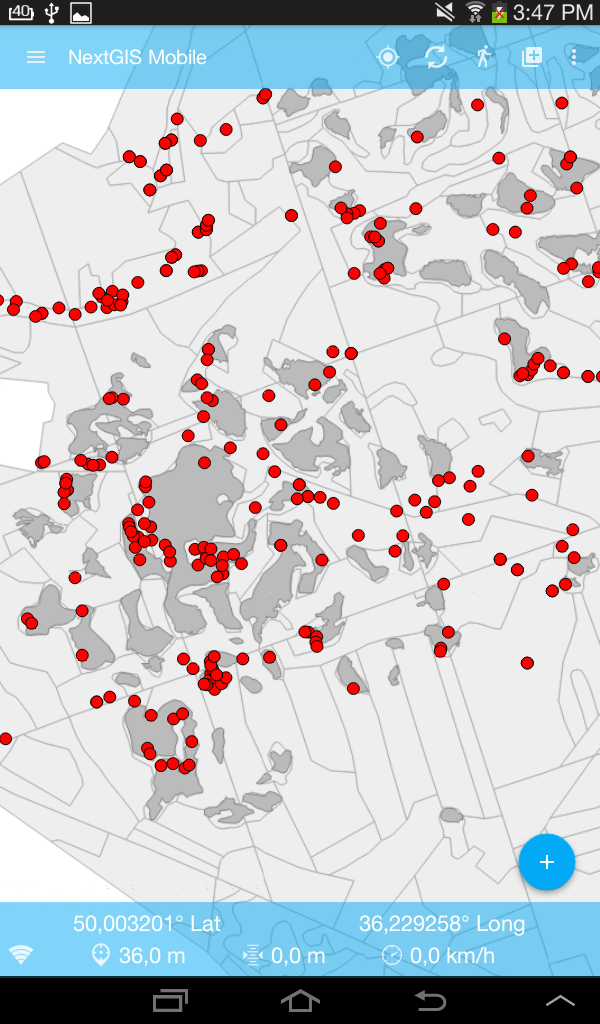 Basic vector format is GeoJSON (fortunately that can be convert from/to shapefiles in QGIS/NextGIS Desktop with no troubles) while a wide range of raster and vector formats can be used directly or via data exchange protocols. A plugin called QTiles was developed specially for offline tile cache creation in QGIS.

You can create and edit points (from GPS sensor or anywhere on map), lines or polygons, as well as draw lines or polygons through tracking. Another NextGIS desktop tool, Formbuilder, could be used for creation of custom forms for data gathering (only for Windows OS, it is very, very bad!). But be aware: the result is not a form, but new vector layer! In my experience this works with some bugs. For example, my forms do not display ‘select one from list’ option correctly, additionally it isn’t possible to view full list of values (figure 6). But I hope that issues will be fixed soon. As I know from my friends, developer version works more stable. 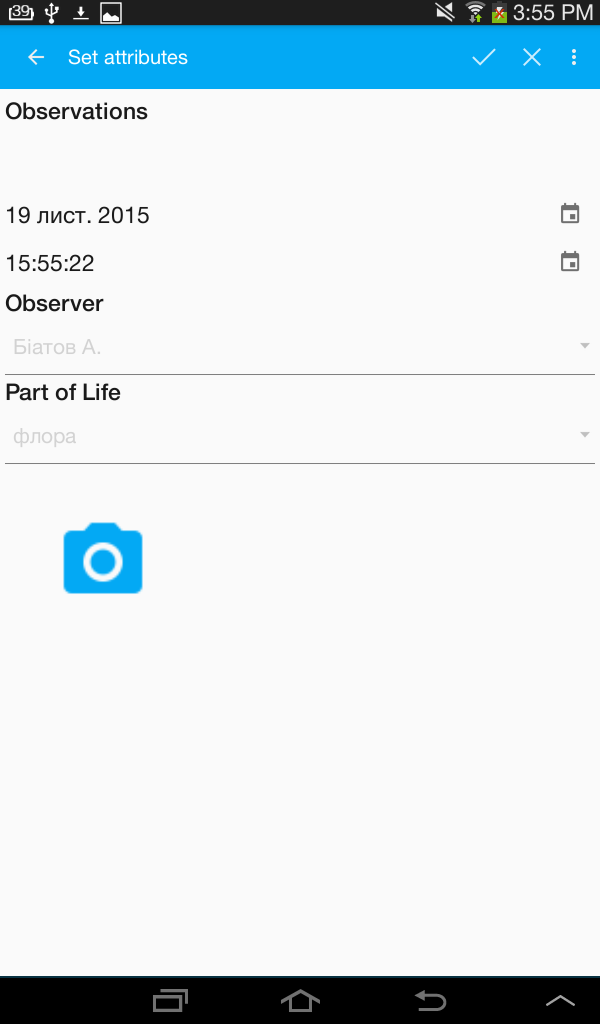 In general NextGIS tends to transform into ‘open source ArcGIS’ and cover all aspects of mapping and geoprocessing. And I guess it is cool. But stability of Arc is still not a feature of NextGIS.

It is independent from any desktop or web applications; input and output files for MapIt can be processed using any GIS software of your prefer. Alternatively to solutions described above, MapIt has its own ‘form builder’: you just set fields and values in mobile. MapIt allows to import, create, edit and export points, lines and polygons; it can use online map services (like Google Maps or Open Street Map) or off-line tile cache; there is a flexible layer manager (Fig 7). Documentation is simple but comprehensive and well illustrated. 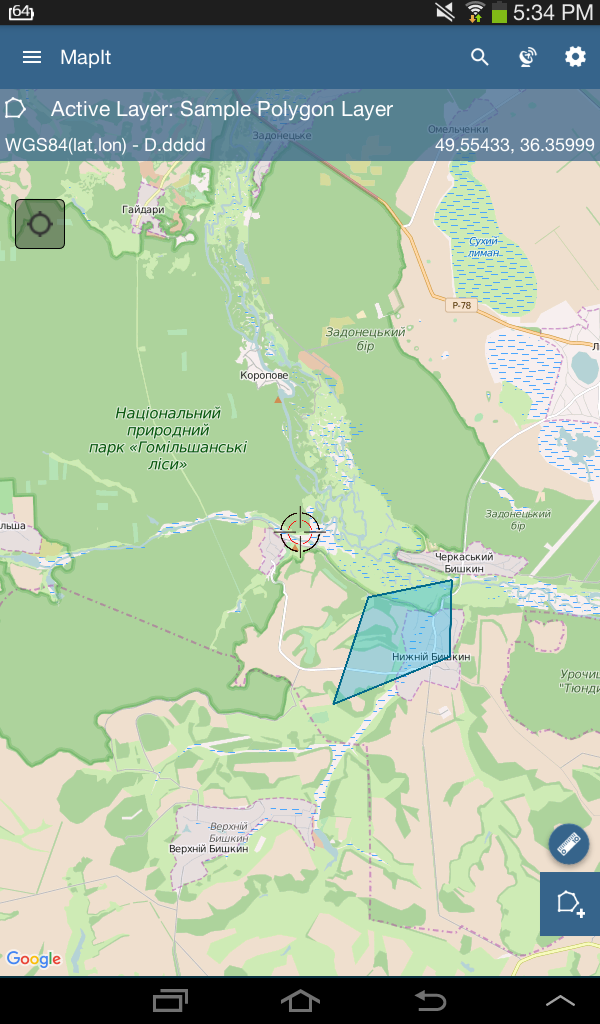 Unfortunately, free version of MapIt has a strongly restricted functionality. However, its price is not high even for a Ukrainian user.

After a quick registration the user is able to upload almost any type of own geodata to the AmigoCloud server (or create a new geosurvey from scratch), install mobile app (Android and iOS supported now), log in and forget about everything (figure 8). 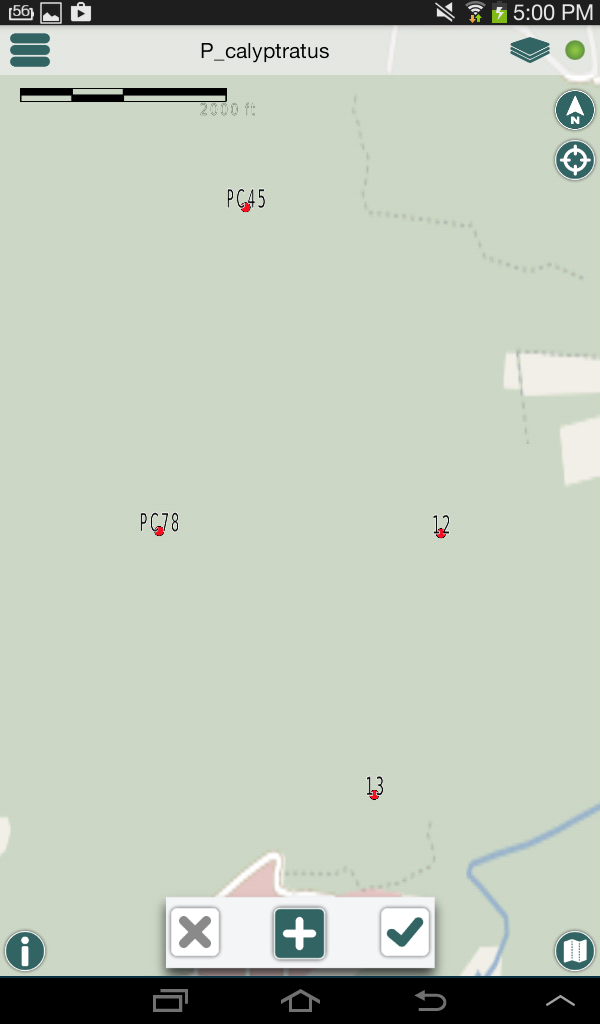 Data sync between mobile and server is performed in real time automatically when mobile device gets wi-fi access. If the user is offline, all will be synced later as well. The web interface has simple and intuitive toolbox for sharing, editing and exporting of geodata. Simple form for geodata collecting supported as well (figure 9). 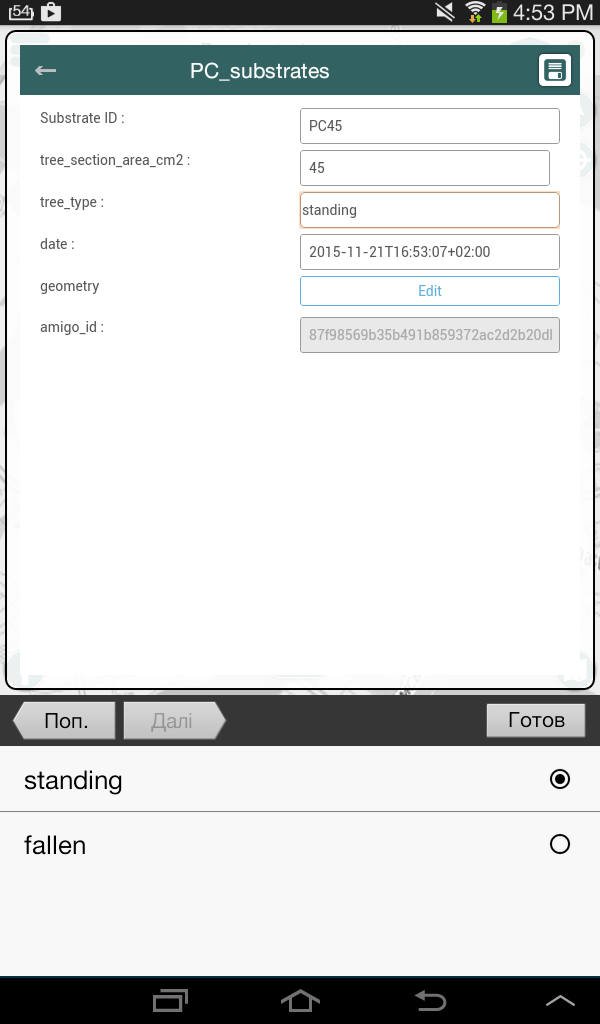 It is a small and little-known non-commercial project, however in my opinion it is one of the best for occasional, individual work in the field. SMART supports common vector and raster formats (see Tables) but has some limitation of file size. Also it has its own simple form builder (figure 10), and is capable of area and distance measurement and drawing polygons by tracking. 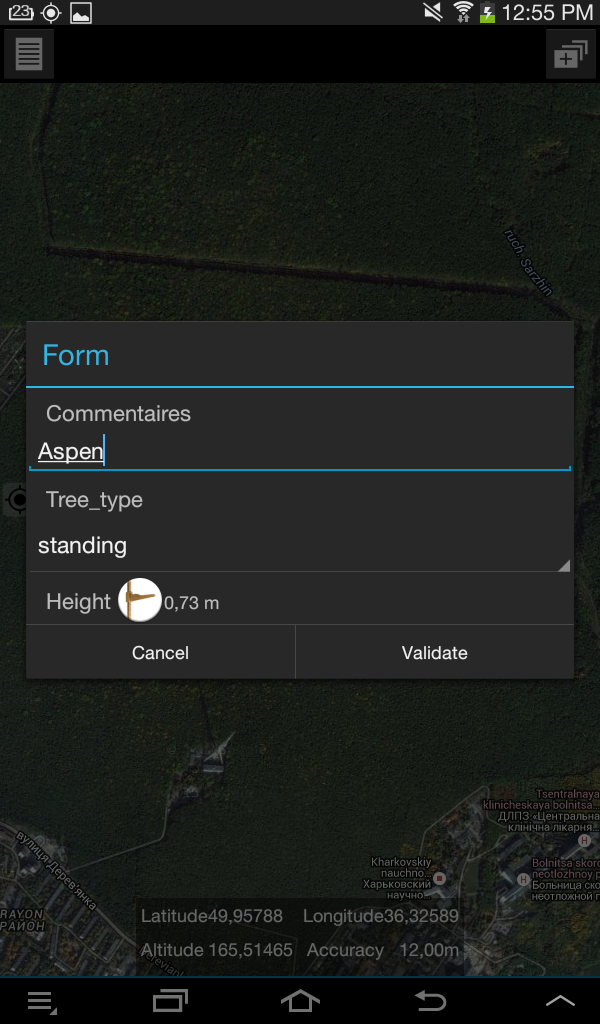 For me there is only one disadvantage: SMART starts its work from creating a ‘mission’ that has to be finished before exit. You can see your geodata only while mission is active. Unfortunately, I could not find any ability to continue this mission after finalizing. The data collected previously will not be shown either. However, for me SMART is the most intuitive mobile GIS at the moment.

For more info (if you read French, of course): wikismartproject

*via web interface
**via additional tools

*only in a paid version

In this post we reviewed only a few Android-operated tools for geodata collection. All solutions have some strengths and weaknesses. I am still waiting for an ideal mobile GIS, if such software is possible, of course.

Please suggest your preferred mobile geodata collectors in comments below!