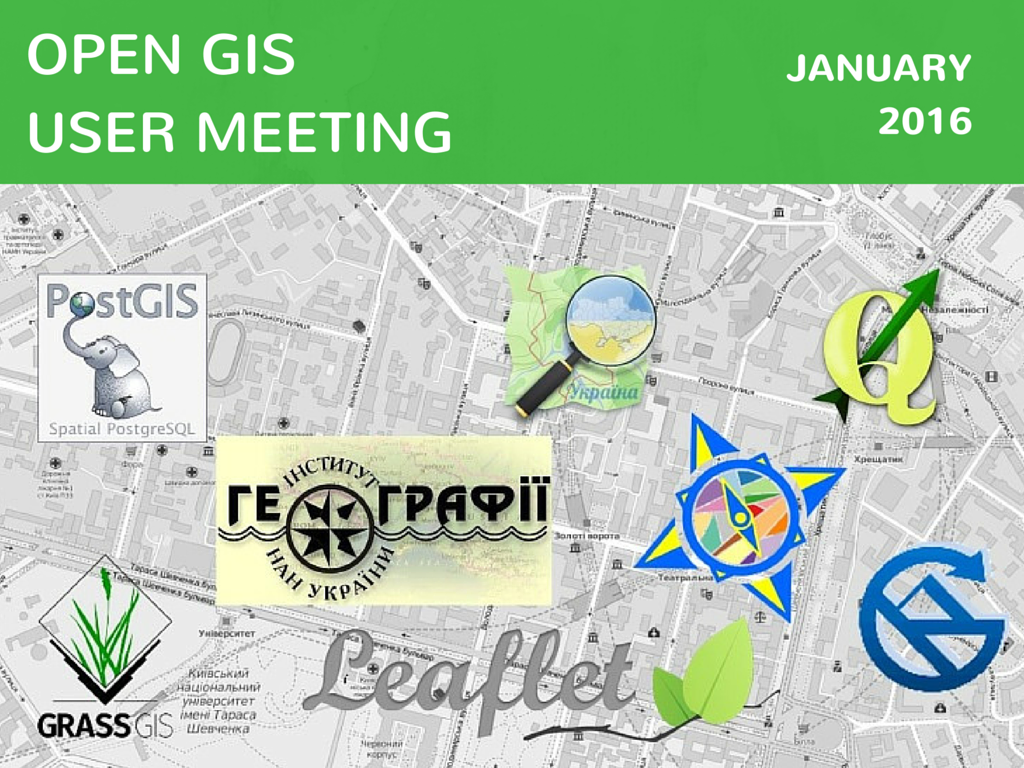 Last Saturday, on the 30th of January, a meeting of the open GIS users took place. This meeting brought some surprises to both organizers and participants. Find more details about the event from Oleksandr Golubtsov – our author and one of this meeting initiators. Enjoy it!

That’s how many people gathered at Open GIS Users Meeting at Institute of Geography of the National Academy of Sciences of Ukraine last weekend. Several enthusiasts came up with an idea about the informal meeting out of the blue when they were commenting on a post in the social network. The idea came true and there was a large-scale event bringing together specialists, experts, beginners from all Ukraine. These people all were interested in a development and using of open geoinformational technologies and data. Perhaps, it was the first case in the history of Institute of Geography when there were so many people inspired by a common idea within its walls. 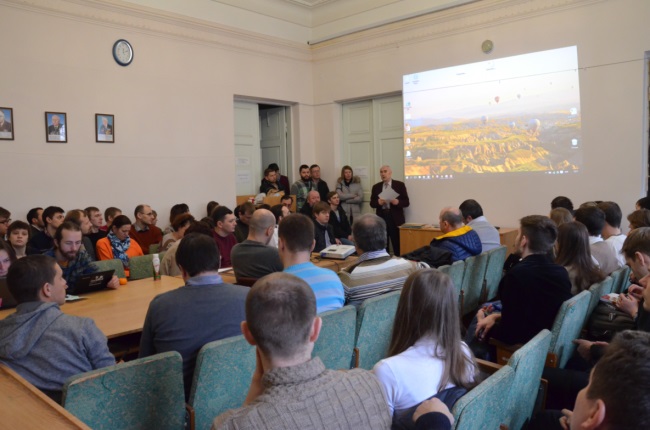 Talking about this meeting we should thank the administration and specially Leonid Rudenko, Head of Institute, Academician of National Academy of Sciences for their support. While Mr. Rudenko was making the speech of welcome he emphasized the main idea of this event was not just to set out work results but to meet each other and to find like-minded people. And it was quite easy as members of different sectors of science and productin from Kyiv, Kharkiv, Chernivtsi, Lviv, Odesa and other Ukrainian cities and towns were gathered at the meeting.

How can a participant of Open GIS Users Meeting can be summed up? We took a poll to find out the circle of potential delegates. We got 49 answers and there are some results. Most of all they were representative of universities (40%), commercial companies staff (25%), nongovernmental organization members (16%) and other (18%). 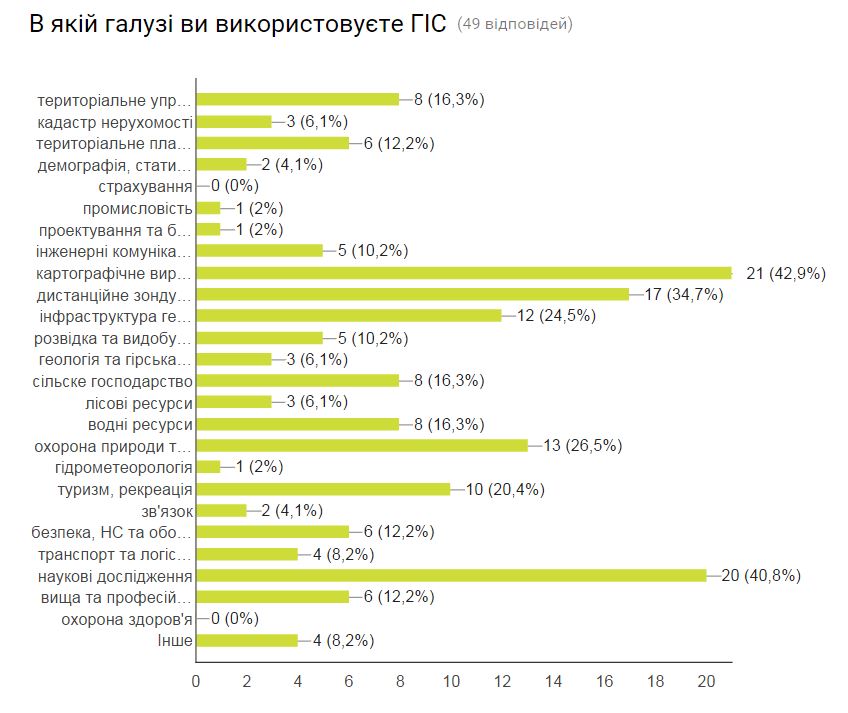 Main ways of GIS use (according to poll answers).

Among them most people were involved in the cartographic production (43%) and the research activities (40%). About half of event participants said that they were advanced GIS users, 30% of beginners and 18% of experts. Obviously, large majority was acquainted with open GIS and OpenStreetMap and mostly used QGIS software (87%). More than 50% of respondents stated that they were eager to take part in an open GIS-project and 30% of them were not aware of this kind of possibility. This also showed that the meeting we were to organize was called for.

The planned format of meeting didn’t provide a preliminary speeches or special guests. But it appeared that there were a lot of people willing to share their experience of open GIS and geodata use. Participants from different cities of Ukraine were able to present their work in Kiyv thanks to Intetics Co.

The reports given had various topics. For a start, Vladimir Agafonkin told his story of how an experiment of a junior developer (“actually, rock musician who still knows nothing about GIS…”) has changed the world of interactive cartography and how Leaflet came into the world. Simplicity is the key-note of Leaflet creator’s presentation! 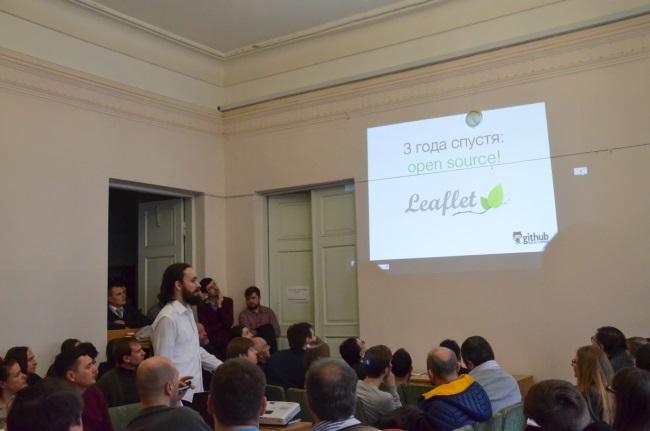 Andrew Golovin presented an extensive lecture about OpenStreetMap – a platform for creation and spreading cartographic information. Next, there were two lectures about the common use of OpenStreetMap. Oleg Zamkoviy told about capabilities to use OSM for development of a cartographic service called nadoloni.com and Viacheslav Loyivskiy presented the humanitarian projects HOT OSM and Missing Maps Project. Jaroslav Smirnov analysed issues of using open GIS in the educational process. The examples of QGIS using gave Eugen Zakharchenko (cadastre of natural medicinal resources of Ukraine forming) and Nadia Beba (Romashka) from the civil society Cartographichna Sotnia spoke about using QGIS for military necessities. Three lectures took up questions of using remote sensing methods: Tetiana Kuchma spoke about the processing algorithm of Proba-V images, Anastasia Tishaeva reported about open software in regional projects of up-to-date land use investigation (a case of Myanmar), Olha Tomchenko spoke about researches of ecosystem changes (a case of Kyiv reservoir). Sergiy Shelkovnikov presented GISFile.com cartographic service. The talk by Oleksiy Vasyluk and Sergiy Panchenko was about issues related to ecosystems studies that can be solved by using GIS.

The meeting has shown that there are a lot of people in Ukraine interested in and like working with open GIS. A great number of participants that hardly fit inside the conference hall of Institute of Geography – is the largest surprise for the organizers.

How about a next meeting?