Since ancient times, one of the map’s purposes has been land inventory. It is not surprising, because the land has always been the main wealth of most countries and the land tax served as a basis for the state treasury. Of course such an important business of tax collection demanded an information management system, this led to cadastre and cadastral maps development.

How it all began

One of the oldest cadastral maps (or at least some people refer to it that way) is a Bronze Age rock carving in the valley of Val Сamonica (North of Italy) (fig.1). 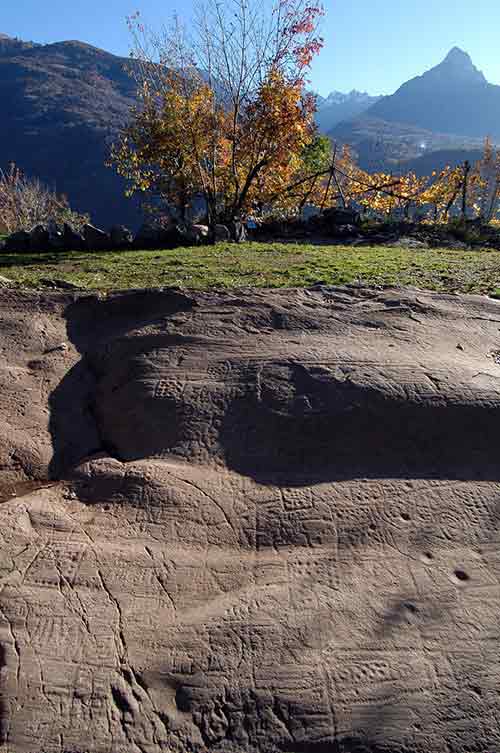 This stone carved outline dates from 4th-3rd millennium BC and represents a plan on which experts distinguish cultivated fields, trails, streams and irrigation canals (fig. 2). 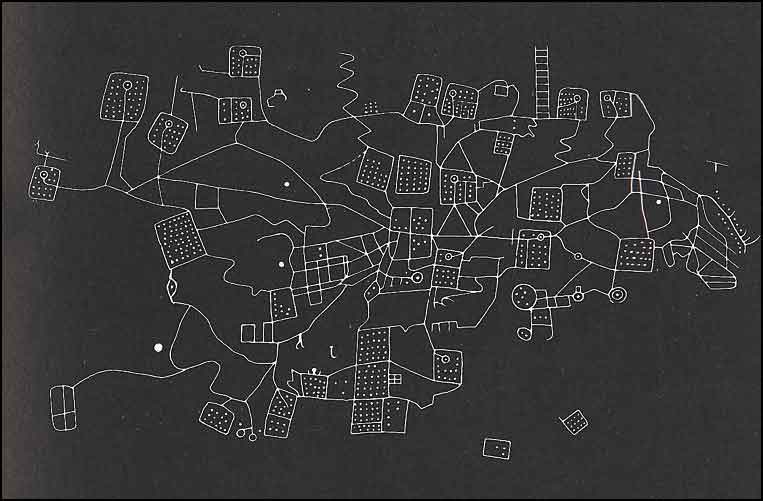 First mentions of professional cadastral maps could be found in the history of ancient Egypt, before 3000 BC, where land records were held indicating land boundaries, plot areas and names of the owners.

According to a legend, Pharaoh Sesostris commanded to divide lands into squares, give them to the people and collect relevant taxes.

In the country of pharaohs technology of tax establishment and collection was well developed and characterized by high accuracy. Twice a year special officials – appraisers – conducted quantitative and qualitative land evaluation with graphic fixation of data on the primary plans in the form of special clay tablets. Results of these descriptions were stored in the archives.
Emergence of the term “cadastre” is often associated with Latin word “caput”, which means taxation object, and “capitastrum” – list of the objects that are taxable. Beginning of Roman cadastre is usually associated with the name of sixth king of Ancient Rome – Servius Tullius. During his reign in the 6th century BC a special register “Tabules Cenzuales” was compiled, it contained  information about the size of land plots, their processing methods, information about the owners, the quality and productivity of the land. Boundaries of the plots were deposited on the marble or bronze tablets. 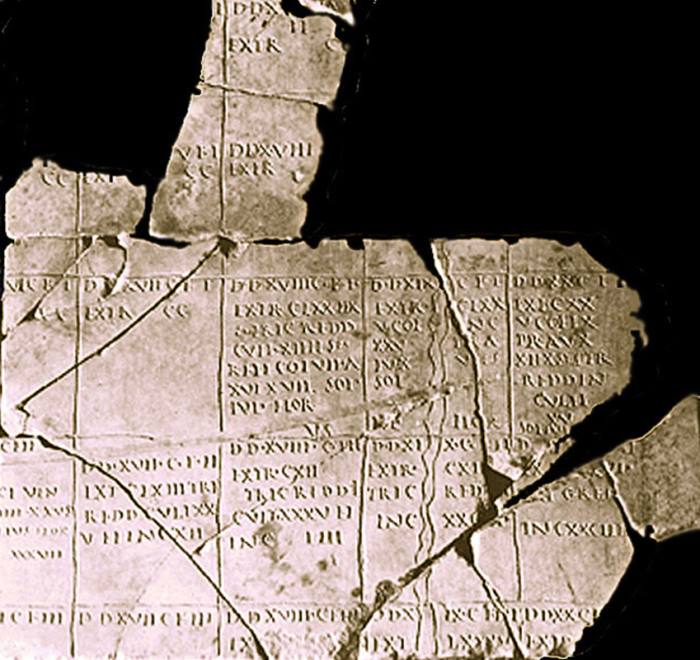 On the fragment of cadastral plan, founded in Orange (fig. 3) we can see boundaries of land plots, identified by method of centralization, and network of main roads. Roads with stone pavement up to 12 m wide have been laid every five plots along meridians and parallels. 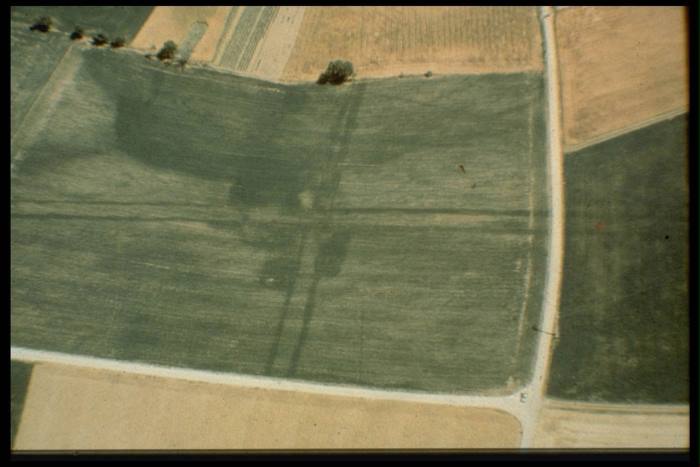 It is interesting, that consequence of that butting method is left in landscapes until now. Modern aerial images show that. We can clearly see well-known famous ancient Roman roads –cardo and decumanus, which always intersect at right angles.

List of laws of Kyiv Rus’ “Rus’ka Pravda” was developed in XI-XII centuries like the Byzantine Land Code. A sort of ancient cadastre. At that time, available quantitative and qualitative land records had a simplified character. Lands were classified into yards, arable, fruitless, haunting grounds. Boundaries were determined on the ground. The size of the area was determined not by the geometric measurements, but considering amount of labor expended by workers or quantity of the grain sifted into the ground.

There is a great book of H.N.Teteryn “History of butting, land planning and land cadastre” (Novosibirsk: Sibprint, 2007), which we encourage to read for improving knowledge of the history of cadastre.

Historical progress along with development of state mechanisms caused evolution of cadastre and cadastral mapping.

Austrian cadastre was one of the most advanced in Europe. In fact, it still is. Austrian cadastre was based on veritable scientific approach. It belongs to championship in Western Europe. After the accession of Lombardy to Austria in 1706, land tax system has appeared. It was based on geometric dimensions, reliable cartographic materials and scientifically based definition of the net profits of the land. This cadastre calls “Milanese”. After some time this system was improved in Austria and other countries.

This system left some effects in Ukraine. In the middle of XIX-th century on the territory of Galicia and Bukovina, which at that time belonged to the Austrian Empire, received high cadastral maps, fragment one of which is presented in figure 5. 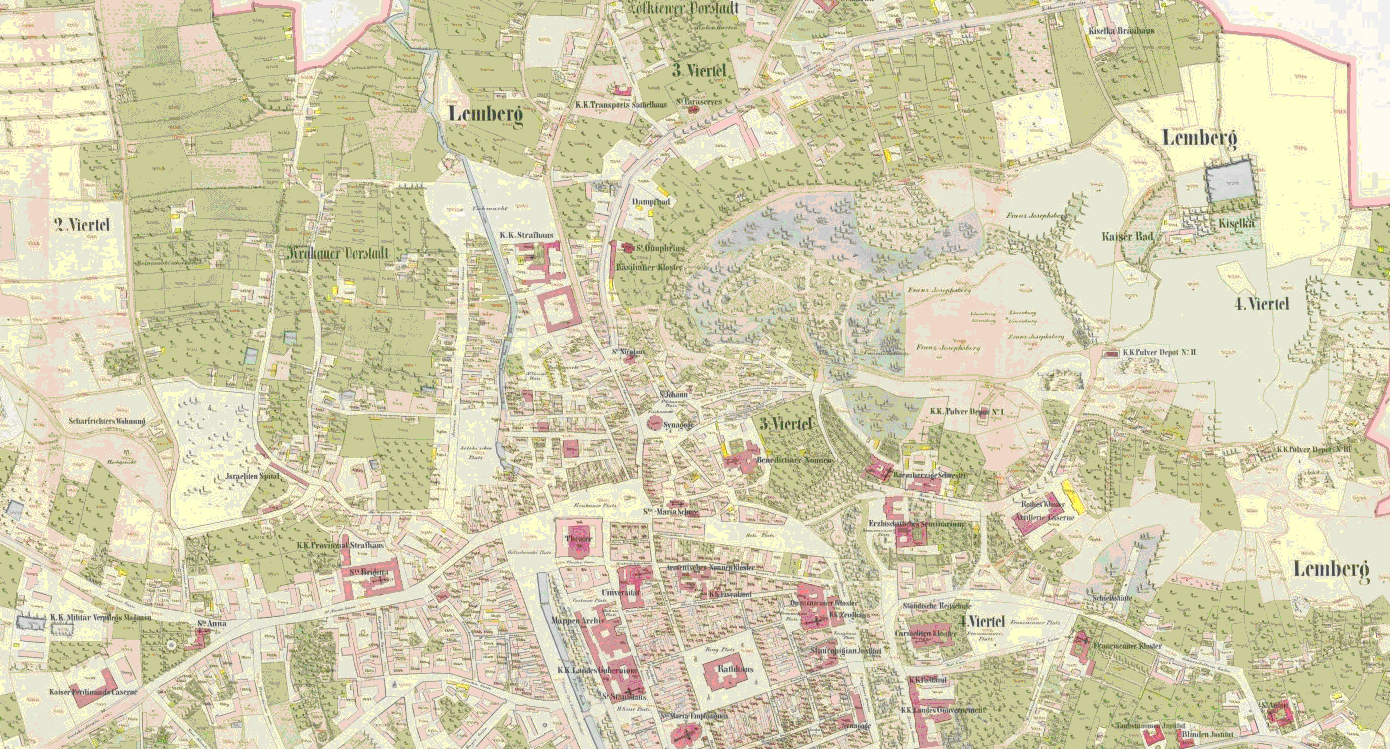 On this website you can discern detailed map of the Lion city and other cities of Galitsia.

If you know German, here you can download a book by Kurt Schar, a senior researcher at the Austrian Academy of Sciences, about history of cadastral works in Bukovina. Austrian cadastral maps of that time relied on precise geodetic framework in the form of network triangulation and were provided with topographic surveys by a large scale. Their thematic content was based on a valuation technique of ten land types. On the ground, specialists did evaluation work. Surveyors described common natural conditions of the territory of every land plot, existing infrastructure, housekeeping, and determined net profit of the land based on data for 15 years.

Time passed and in the current definition of the modern State Land Cadastre of Ukraine it is stipulated that the “cadastre is official geographic information data system of the lands situated within the state border of Ukraine, their intended purpose, use restrictions, data of the quantitative and qualitative characteristics of the lands, their assessment, land distribution  between owners and users”.

Since January 1st 2013 the Public cadastral map (PCM) of Ukraine is accessible online. We will not repeat numerous slogans about creating a transparency of the land relations of the largest European state, we will only note unquestioned and absolute progressiveness of this step. 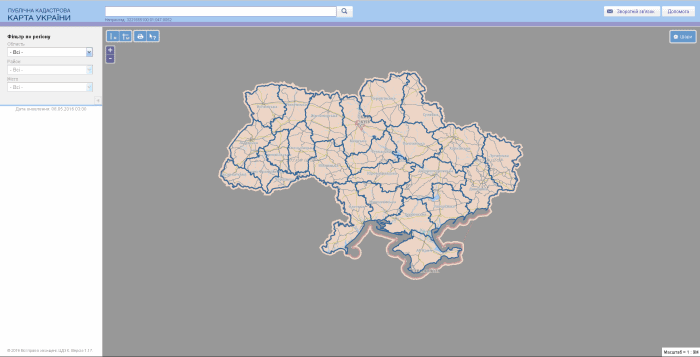 Fig. 6. Home page of the public cadastral map of Ukraine 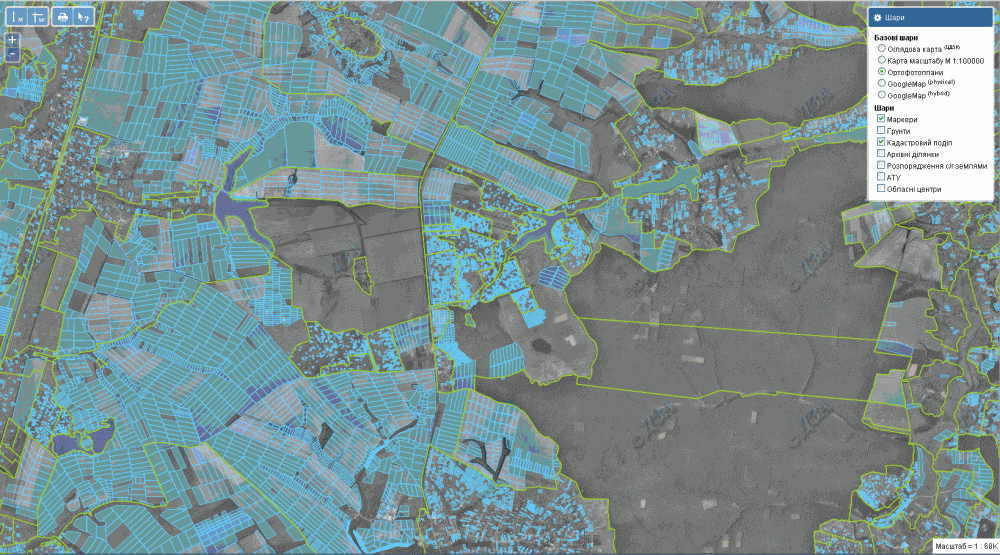 The main goal of PCM is the publication of data from the State Land Cadastre, as relevant law predicts it. On the map, you can see all registered lands in Ukraine.

a)      Checking of availability of the land plot in the state land cadastre of Ukraine and absenting of errors and discrepancies in its reflection;

b)      Sending an electronic application about the lack of areas on the map or errors on its display.

This map includes traditional services of such viewing material about state border, landmark areas, regions and cities of Ukraine. Soviet topographic maps of 1:100 000 and comparatively “fresh” orthophoto maps, built on the materials of 2011-2012 aerial images, serve as a raster base layer for it. Recently creators of the service added a possibility of loading of satellite imageries from Google Map.

Besides that, a small-scale map of soils is available on the website.

Data about land plots: boundaries, cadastral number, ownership, purpose, area, is the main information content of PCM. Since October 7, 2015 a possibility to get information about the owner or user of any land plot online is introduced. You just need to pass short registration process in the system.

PCM has an intuitive interface. A set of spatial filters that allow you to find specific location and a panel “layers” allows selecting required cartographic information layers. Map has traditional tools for navigation and measuring lengths and areas.

There is an interesting option of adding information about cadastral division, location of the land plots and soils to the projects ArcMap or QGIS.

For those, who are interested in the topic, we highly recommend to work with cadastral map of Georgia. It’s state property registration system ranks third place in the world according to the rating of Doing Business, conducted by the World Bank.

Also check out ZoLa website (Zoning and Land Use) of New York City. 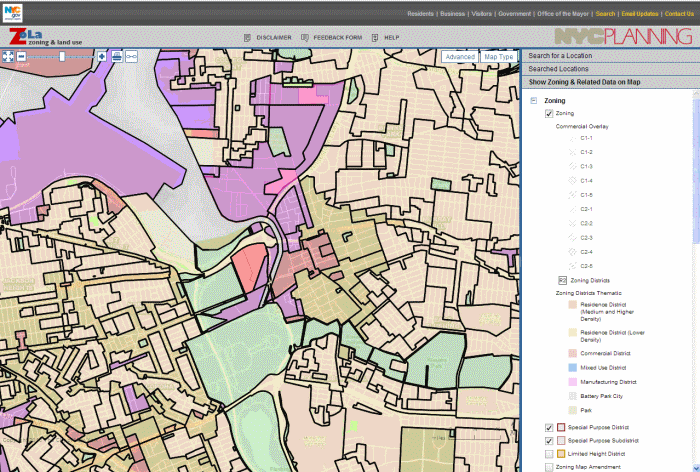 Fig. 8. Zoning and land use map of New York