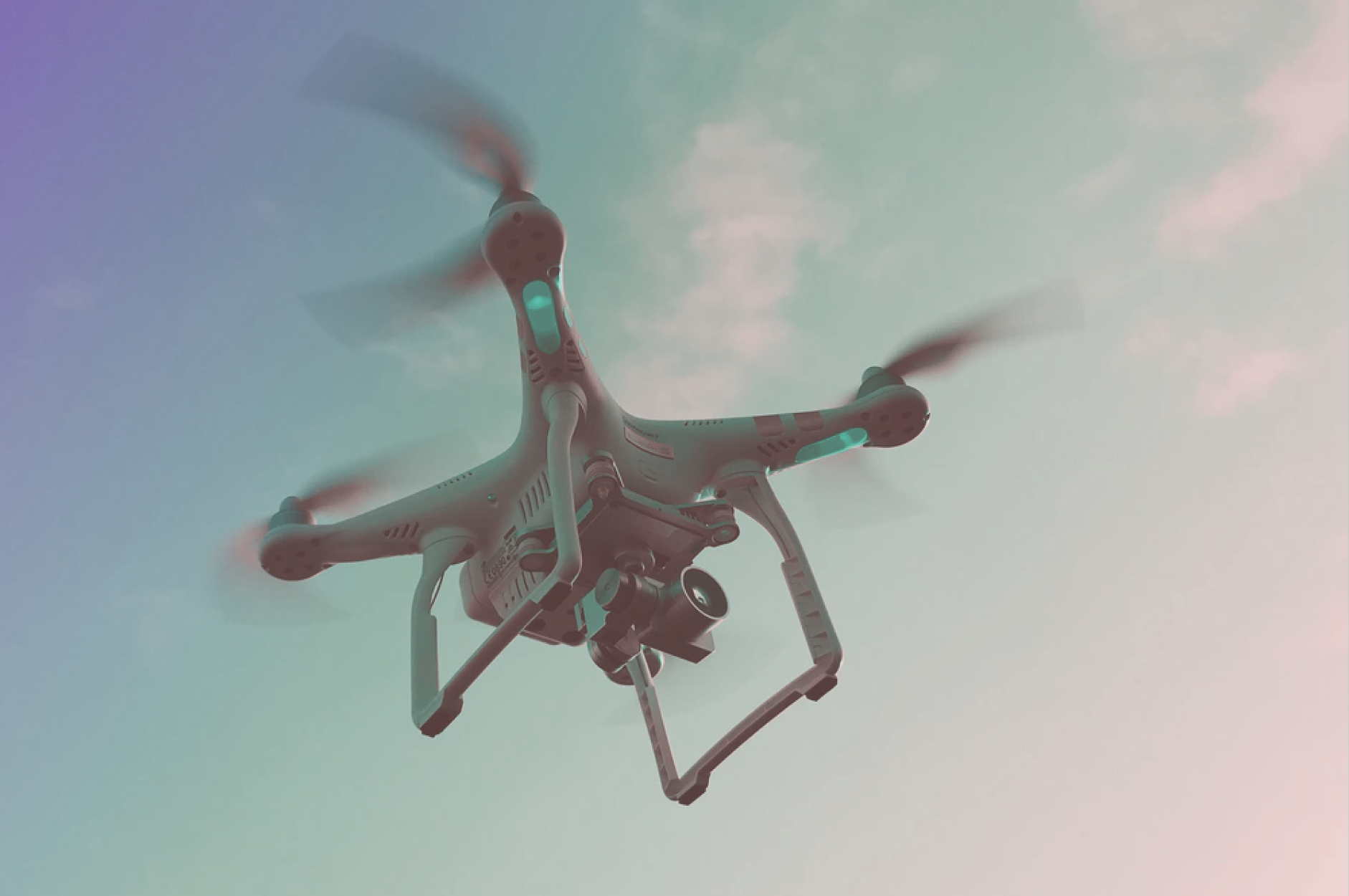 It has been more than three years since we last reviewed Ukrainian legislation regulating the use of UAVs. Since then, there’s been so much water under the bridge, the situation has fundamentally changed.

A more or less clear set of rules and constraints finally emerged in an uneasy, tumultuous and almost epic battle to Ukrainian legislation, amid much controversy, debates, objections and lawsuits, and the days of complete anarchy in the use of drones are supposedly running to an end. The new «Rules of Use of Airspace» were signed on May 11, 2018, and on September 14, 2018, were registered by the Ministry of Justice, which finally lays out the use of unmanned aerial vehicles.

The website of the Ukrainian State Air Service has a separate page for «Unmanned aerial vehicles», where the new rules for the use of drones are described in form text and infographics in the most specific and detailed way. (Figure 1) 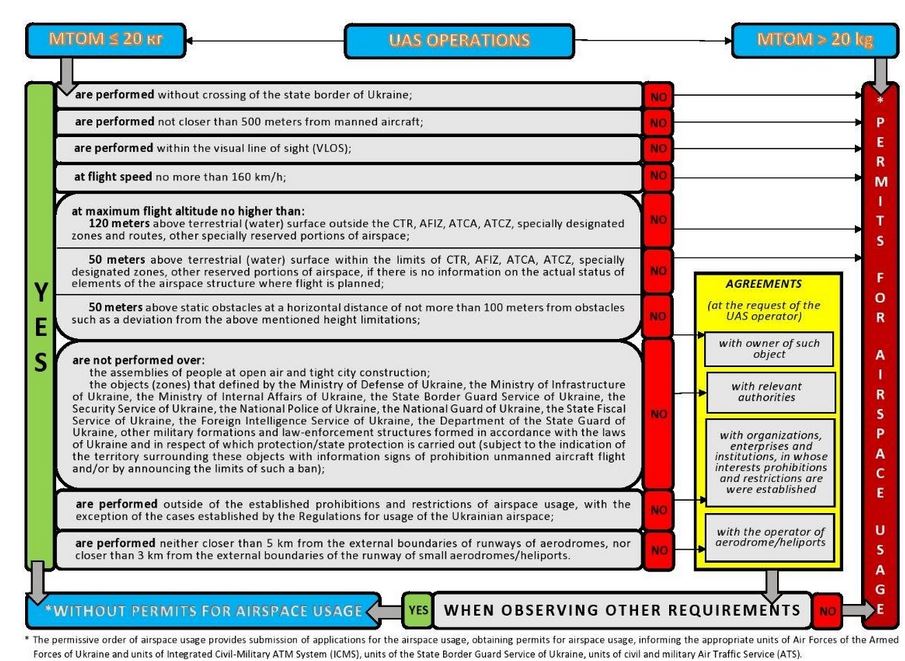 In general, if you have a drone whose maximum take-off weight (Maximum take-off mass or MTOM) does not exceed 20 kg and used for entertainment or sporting activities, registration and special authorizations are not required, if certain rules are followed, namely: flying within direct visibility, not exceeding 120 m at a speed not exceeding 160 km/h, outside the zones of prohibitions and restrictions, avoiding crowds and densely built-up areas. What is a “crowd” and a «dense built-up area» is not explained in the rules, therefore, as always, interpretations are possible.

If you need to use a drone for commercial purposes, take photographs or videos in the city, fly in the restricted zone, or otherwise go beyond the standards of «free» use of drones, you must coordinate with the relevant authorities and services and make an application for the use of airspace to UkSATSE. The procedure for the registration of airspace users for the subsequent submission of applications provided in detail and can be found, for example, on QUADRO.ua.

The zones of prohibitions and restrictions are presented on the website of the State Aviation Administration of Ukraine as a separate map, the legend contains information for each of the zones listed. (Figure 2) 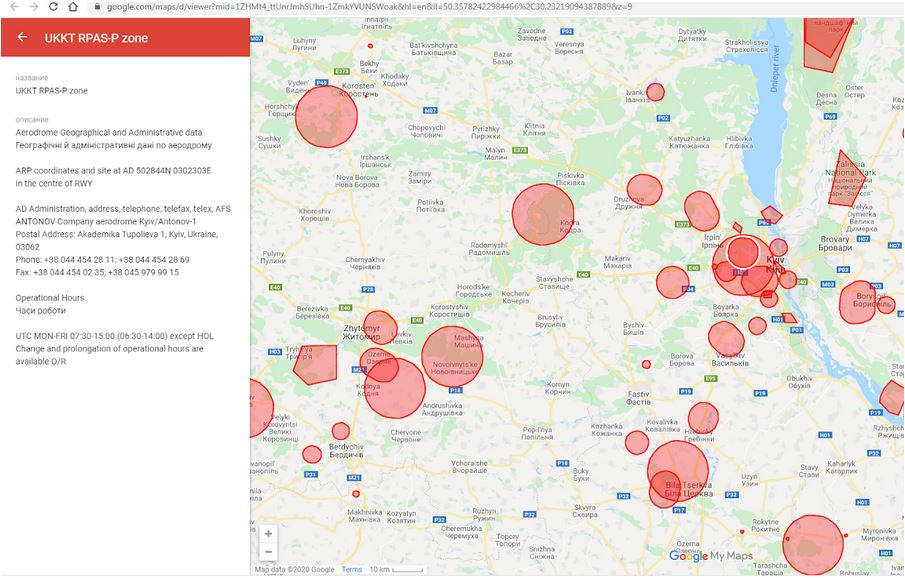 If we look closely at this map, it is obvious that UAV flights are prohibited in almost all major cities of Ukraine. In addition to the ban on flights in densely built-up cities, there is a de facto ban on the uncontrolled use of drones in large settlements.

For example, the filming of the streets of the city of Kharkiv with the help of a drone requires at least an agreement with the local authorities, furthermore, if the flight takes place in the zone of restrictions – it is necessary to coordinate the flights with the organizations, for whose benefit a restriction zone has been established and acquire a permit.

The area of Kyiv is almost completely closed to uncontrolled flights. No-fly zones overlap each other. However, drone footage of the city regularly appears online. Some of it is made by professional journalists who work with the necessary approvals and permits, some – by “wild drones”, who are practically not controlled by anyone

In April 2020, Drone.UA announced the installation of drone tracking system, Drone.Ua’s Aeroscope, on the territory of the capital’s KyivСhallenge Heliport. The announcement made by Valerii Iakovenko (the founder of the company), was met with a negative reaction from the drone community, since we still have the ancient rule that “the severity of the law is compensated by its non-mandatory implementation”. The new restrictions were difficult to accept, although compared to other countries, Ukraine was one of the most lenient countries to drone users.

The Regulation on the Use of the Airspace of Ukraine (paragraph 46) defines a list of the violations, among which: non-compliance with the airspace conditions and the use of airspace without the submission of an application, obtaining permission and/or the conditions for its use, failure to comply with the requirements to inform the authorities responsible for monitoring the procedure for the use of Ukrainian airspace about the flights and other activities involving the use of Ukrainian airspace.

Under article 111 of the Code of Administrative Offences, such violations are punishable by a fine of between sixty and five hundred non-taxable minimum incomes of citizens (from 1,020 to 8,500 UAH). Nevertheless, small quadcopters are often found over residential areas. Because toy drones are now available in any toy store or appliance store.

In order to identify and prove a violation of airspace, appropriate techniques must be used to identify and intercept the drone, and there must be reasonable grounds for doing so. That’s why law enforcement has no interest in children’s toys today. But it’s potentially possible to get a penalty for launching a drone on a playground, or in a residential yard if the police see you doing that.

The other thing is the uncontrolled drone that attempts to film or flies for unknown purposes within restricted areas, such as administrative buildings, or close to military units. On the above-mentioned map of forbidden zones, some of them clearly indicate: «possible interception of violators». The cost of a drone is usually greater than the potential amount of the fine, and thus its loss is in itself a tangible punishment.

As for the protection of life and personal property from the potential danger of drones, it seems that today a rule of «help yourself» is used in Ukraine. Together with the UAV industry drone «jammers» are developing and becoming more common.

Despite the fact that according to Article 56 of the Law of Ukraine «On radio frequency resource of Ukraine» it is forbidden to create radio frequency, the search for «drone jammer» at prom.ua gives dozens of hits (Fig. 3). They are freely available in a wide range and at an affordable price. Besides, there are many video instructions like «how to quickly assemble a drone jammer» that can be found on the internet. 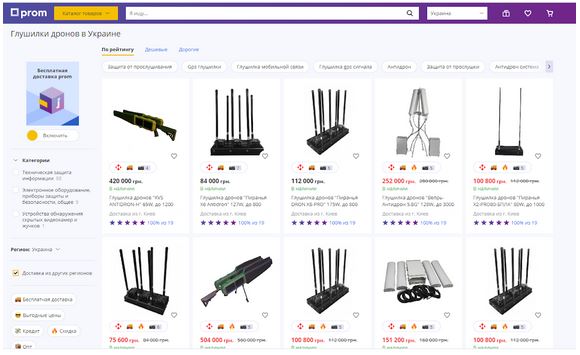 If illegal use of such jammers is detected, the user may be held administratively liable. Under article 146 of the Code of Administrative Offences, violations of the rules governing the operation of the radio-electronic appliance, as well as the use of the radio-frequency resource of Ukraine without proper authorization or in violation of regulations, regulating the use of the radio-frequency resource of Ukraine, incur a fine from 340 to 850 UAH, and, if the acts are repeated, from 850 to 1700 UAH, with confiscation of devices that were illegally used.

In addition, article 361 of the Ukrainian Criminal Code is frequently mentioned to warn of liability for the illegal use of jammers «Unauthorized interference in the work of computing machines (computers), automated systems, computer networks or telecommunication networks», which has a more severe punishment. In real life, however, drones suddenly lose their signal, as a result, owners complain about jammers, but they fail to prove anything.

A vivid example of such an unofficial «war against drones» was the use of «jammers» in the Kyiv city center during the 2017 mass protests. Drone owners blamed the authorities for «jamming» their devices, in turn, the authorities denied any use of such equipment.

The development of unmanned aerial vehicles is happening at a rapid pace, and legislation must, of course, keep pace with events in order to meet the requirements of the modern world.

For example, the ban on urban flights is now gradually becoming meaningless, as the scope of drone use is constantly expanding. The experience of quarantine, which has been implemented in virtually all developed countries of the world in response to the SARS-Cov-2 virus pandemic, proves that drones can find very wide, and sometimes unexpected use – from quarantine surveillance and prevention, seeking sick people, walking the dogs or delivering food and medicine.

It is likely that drones will have to be registered right after the purchase and the authorities will provide each drone with a unique identification number (as they currently do in the United States or Russia), also certified drone pilot training might be mandatory.

In the EU, as of July 1, 2020, new drone regulations are in force, according to them all existing UAVs with weight over 250 g and non-toy drones with the weight under 250 g must be registered, drone pilots are also required to get registered in the EU country, where they reside or have a main job and they must take the tests. For the best possible explanation of the rules for the general user, a cartoon about the intelligent drone and its pilot is posted on the website of the European Aviation Security Agency (EASA).

Their short airtime is one of the constraint factors on the use of drones, as well as the need to change batteries and their relatively high cost. However, solar-powered drones already exist that do not have limits of battery life and flight time. Hydrogen-powered drones that successfully passed the tests in 2019 can also stay in the air for up to 10-15 hours.

The rapid development of technology and the trend towards greater automation in all spheres of human activities, particularly the COVID-19 quarantine impact of the world economy, foretell an increase in the use of unmanned mechanisms (in the air, in the water and on the ground) in all spheres of life – unmanned trucks, taxis, couriers, observers, guards, sprayers, etc.

The ability to prevent collisions passing by obstacles, the automatic ban on flights in prohibited zones, protection against unexpected falls in case of loss of control, automatic turning to a given point in case if communication with the pilot was lost – are the solutions, that had been already introduced, and soon will be implemented in the design of drones in the coming years for the safety of their use, including in built-up areas.

Despite some skepticism, the drone market continues to grow and remains one of the fastest-growing in the world. According to Drone Industry Insights, the world market for drones is projected to grow by $43.1 billion until 2024. China will remain the undisputed world market leader. 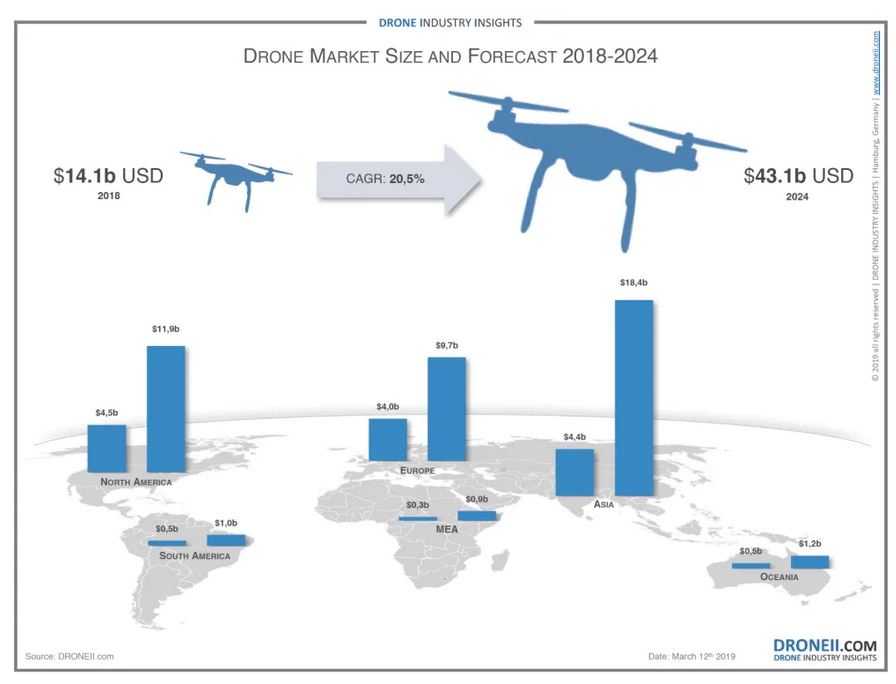 Looking for new energy for drone operation, increasing safety requirements, registering drone pilots and increasing control over drone use, and regulating the use of anti-jammers are the main trends in the development of civilian drones in the modern world. In addition, the current trend of increasing the number of State drones in authorities and institutions like the police, fire service, rescue service, and so on – is going to continue.