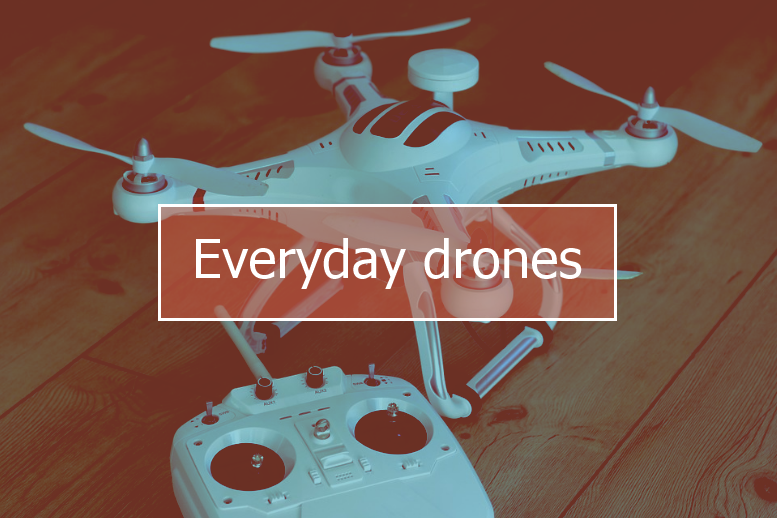 Unmanned aerial vehicles (UAVs) had always been the property of the military scientists, but recently some of these devices, such as drones and quadcopters, have gained a place in various areas of civil life. Every day, humanity finds new applications for them, making certain upgrades to these flying assistants. A bright future is predicted for UAVs, it is expected that they will be as irreplaceable in our lives as the mobile phones. This is because of, above all, their relatively low cost, ease of control, low operation and maintenance expences and so on. After reading about each of possible drone uses you can keep in mind that “the advantage of UAV use is cost-efficiency, promptness and relevance of the data»

There are plenty of examples of use drones on the Internet (I counted about a hundred), and I would like to dwell on the most interesting and, in my opinion, the most useful.

Today small and light drones are widely used for mapping. Additionally to taking pictures of the land cover, special software enables exploration of the natural and urban landscapes, creating thousands of digital points, which represent a digital image and then are used for 3D-modelling. Accompanying software is developed that “bonds” various images and geo-references them to a certain coordinate system. A system based on cloud technology corrects photos so that seem to be made from the same angle (a process called ortho-transformation). One example of such software is Maps Made Easy.

The Governments of the United States, Malaysia and Indonesia are using UAVs to protect their land and the biological species that live there. So, using aerial photographs measures to preserve rare wildlife are taken, their distribution and density at a particular area are studied. The use of UAVs is essential because the methods of monitoring at ground level have lower efficiency and higher cost in dense forests. In some national parks in the world using drones has significantly reduced such negative phenomenon as poaching.

Another drone has been created for fire fighting. It uses sound waves for extinguishing flames.

Today drones are used more and more to study and sometimes to prevent such adverse natural phenomena as forest fires, tornadoes, hurricanes, deluge, tsunamis, earthquakes and so on. For example, scientists from the University of Florida use a flock of 15-cm drones that are launched remotely and consume little energy. These devices may be picked up by air and water streams, allowing them to gather data from within a storm. Moving with air currents, they can gather temperature, pressure, humidity and location data, which enables scientists to acquire data that can’t be collected using conventional methods of research.

Drones equipped with special infrared sensors make it possible to identify people who, for example, are trapped in fires, car accidents, under the rubble of destroyed buildings, avalanches, or other disasters, both natural and man-made, where human resources cannot gather the necessary information about those who can still be saved. Except from collecting information for analysis and rescue operations planning, quadcopters can deliver life-supporting medicines etc. to remote places. 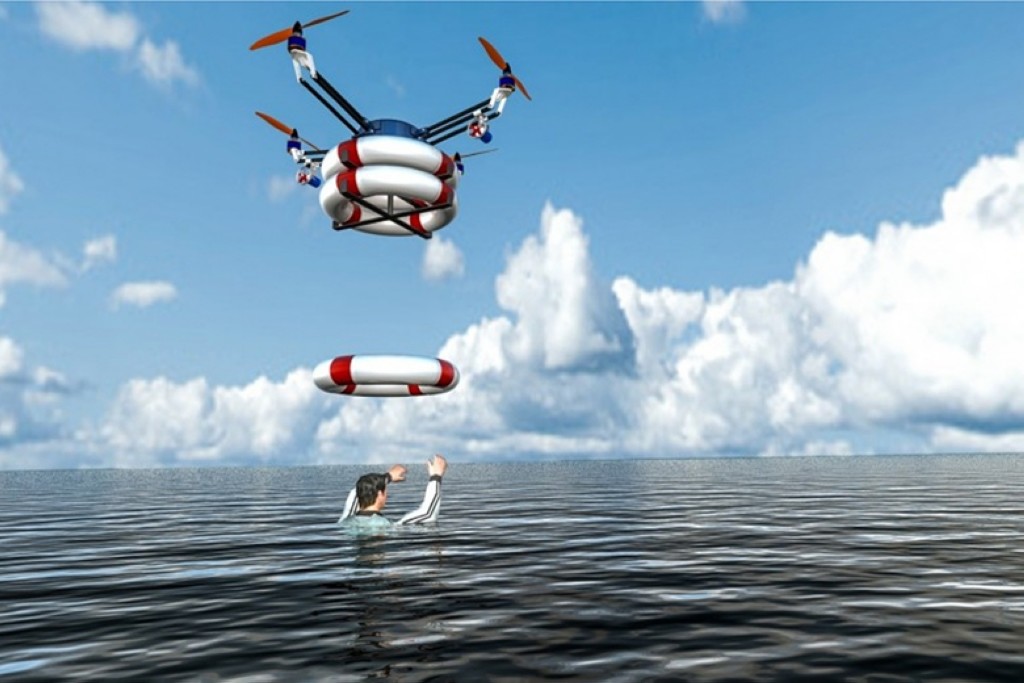 Drones that walk pets, or monitor children that are out in the street without parental supervision are becoming increasingly popular. There are even drone “security guards” that protect their owner’s private property. No need to install dozens of surveillance cameras to cover the “dead” zones, these drones can respond to movements, record an invasion and transmit information to the security services. 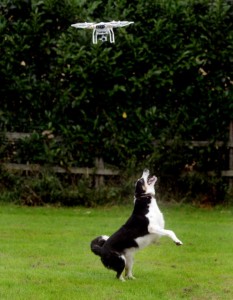 Drone playing with a dog (photo from china-reviews.com)

The copters can also assistant to utility services! They are involved in replacement of bulbs in urban street lighting, whisking dangerous icicles from roofs of buildings, hanging festive decorations and banners. Sometimes drones patrol the streets.

The Oriental scientists went even further, and in early 2016 Chinese developers have presented the world’s first drone-cab. It is equipped with eight propellers, and can lift loads up to 100 kg to a height of 500 meters, flight speed is about 100 kilometers per hour, and is duration – 20-25 minutes.

It is difficult to say whether this is the future of public transport or not, but a breakthrough in the field of science fiction has been made.

Couriers with a human appearance may very soon be substituted by drone-couriers. This type of delivery of products is already being tested by Amazon, the company guarantees delivery in some areas of the US within 30 minutes from the order placement on the web-site. Today, Google is working to launch the delivery of goods to their customers using UAVs in 2017. Copter Express company from Moscow lists a possibility of “to the window” delivery in 10 minutes for a distance of up to 3 kilometers.

Typically, the payload of these drones is up to 3 kilograms, but no one expects (or even insists) а robotic device transferring a grand piano overhead. This type of delivery is very convenient to transport documents, small goods and ordered food.

For several years, manufacturers and sellers have been trying to implement delivery using drones, because it would simplify the logistic support greatly , as all routes are direct and (so far) mostly free and not loaded. One doesn’t have to take into account traffic jams, but only adjust the flight route taking into account the high buildings. At the same time, all the stakeholders interested in this method of quadcopters usage constantly face restrictions from the local governments.

Drones for the media

For several years already, copters have been actively used by journalists, both around the world and in Ukraine. It is done during reports from different places and locations where it is impossible to set a conventional camera or to use a cameraman/photographer.

Quadcopters with built-in cameras allow to shoot panoramic videos and photos in hotspots, places of mass public protests or celebrations from the bird’s eye view (video 2), without involving additional staff. It should be mentioned that drones have become a real godsend for paparazzis.

The main Christmas Tree of Ukraine (material from the YouTube-Channel vnebo.com.ua)

As part of their media involvement drones are also used to cover sports events.

Copters are often used to broadcast these events, creating panoramic views, giving the presence effect to the viewers. But at the end of 2015 the International Ski Federation (FIS) has banned the use of drones with mounted cameras at the World Cup after an incident with Marcel Hirscher, an Austrian skier . A massive TV-drone, that had lost control, then crashed a few inches behind the sportsman.

Most people perceive the quadcopters as entertainment, a toy. Some play in the backyard, some make cool extreme pictures while riding cross-country on motorcycles or bicycles, or while surfing. Additionally large-scale shows that use “flying toys” have been set up recently. For instance, during CES 2016 expo in Las Vegas, «Intel» set a record in the number of simultaneously controlled drones. Experts launched hundreds of drones with LED elements in the air, to perform a light show to Beethoven’s Fifth Symphony (Video 4).

Flying Pantograph – is a drone that repeats an artist’s movements and can draw at distance and at a scale.

A Flying Pantograph from Fluid Interfaces on Vimeo.

In summary, I would like to mention that these are not all areas where the flying assistants are used today, but the ones that are gaining popularity every day and are better implemented. I wish for further development and implementation of many drone-related programs making UAVs our assistants, not enemies or pests, which is alas also quite likely. So this is something for the government officials around the world to think about, to work and create a powerful regulatory legislative framework to ensure the safe use of drones in civil life.