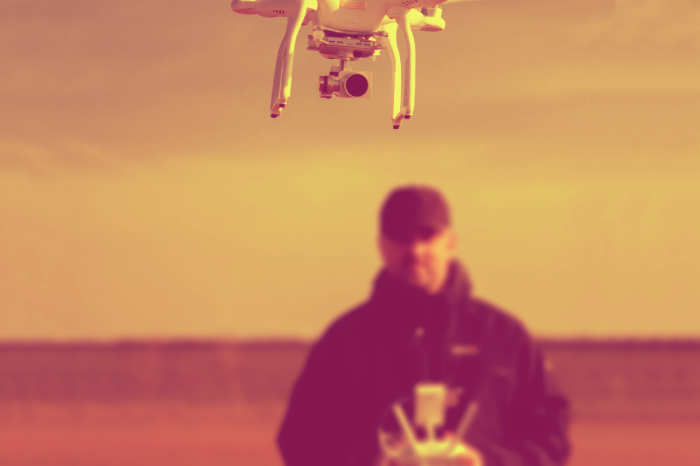 On July 27th, 2017, Drone.ua announced the establishment of a “Professional Union of Drone Journalists” (PUDJ), which, as stated on their website, “unites the interests of all drone pilots.” Such an unusual blending of the concepts of “drone pilot” and “journalist” caused disputes and rejection of some members of the drone community of Ukraine.

The negative reaction to this announcement was quite loud, and this led us to consider trying to understand a little more about the union implications and reflect on the prospects for the development of the drone industry as a new professional direction.

In order not to invent unnecessary information and get first-hand information, we contacted the co-founder of Drone.ua Valeriy Yakovenko, who, in fact, was one of the main initiators of the creation of the PUDJ and is the chairman of the newly formed union. Valery sincerely agreed to answer our questions and to explain some obscure moments. 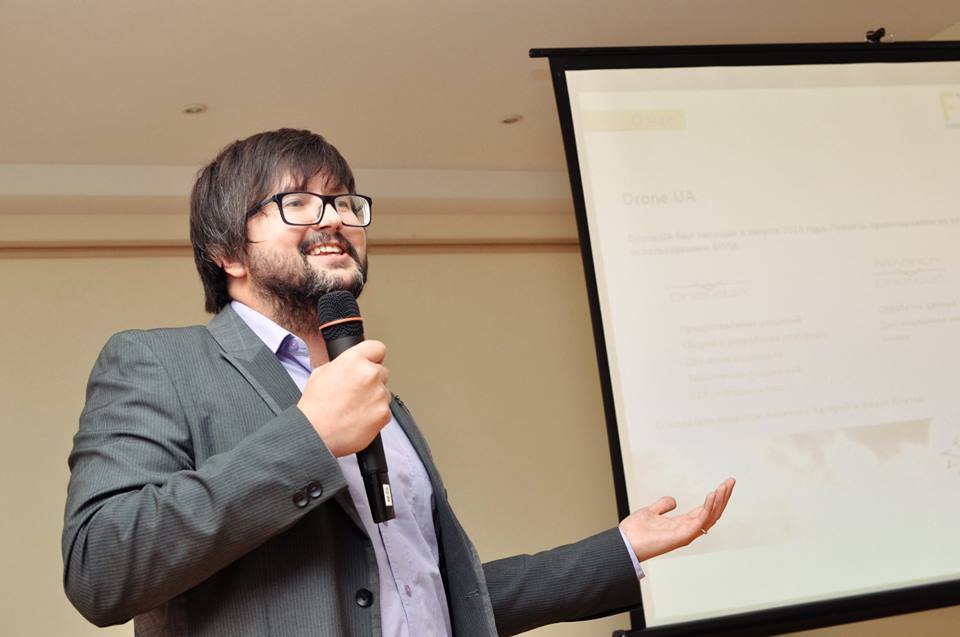 Valery Yakovenko does not tire to actively promote the idea of developing drone business in Ukraine.

We should note that the position of Drone.ua regarding the creation and prospects of the “Professional Union of Drone Journalists” development is described in detail in both the union web page and the series of publications of online media (cit.ua, gazeta.ua, nachasi.com).

But we have repeated some of the basic questions in our conversation with Valeriy Yakovenko.

Alla Achasova: What is the purpose of creating a “Professional Union of Drone Journalists”?

Valeriy Yakovenko: The idea was born last year. Since DroneUA is engaged in the introduction of unmanned technology in Ukraine, we have a number of our drone operators throughout the country. The pilots, or the operators of the drones, perform various tasks with the use of UAVs, and sometimes there are unforeseen incidents that impede the performance of flight operations. To avoid such situations, we have decided to create additional protection for ourselves, also to confirm the legitimacy of our work. The second goal of the union is to combine the market of operators and professional pilots, as well as to develop and implement ethical standards of the profession.

AA: What are the fundamental differences between a union of pilots and an association or a federation?

VY: Both associations and unions combine specialists or companies around common interests. From a legal point of view, these are public non-profit organizations. But there are differences. If associations or federations can consist of physical and legal entities, but only individuals, and in this case employees of certain professions, can become union members.

Membership in a trade union does not exclude the possibility to be also in an association. Moreover, we are waiting for this opportunity to appear. But, unfortunately, there is no structure in Ukraine that could unite the interests of market participants of unmanned technologies at this time.

AA: What benefits will the pilots get from union membership?

AA: What are the requirements for joining the PUDJ?

VY: The terms of participation in the PUDJ are set out in our statute. In short, the candidate must be a media worker in the sense that he has published in any media. It’s about both regular media workers and freelancers, which does not diminish their status.

AA: However, a very small percentage of drone pilots are part of any editorial staff, and therefore journalists, in accordance with the current legislation. In fact, most pilots of drones are occupied with completely different things. Is it appropriate to classify them as media?

VY: The pilots are obtaining media materials for their further publication, so it is quite right that they can be considered as employees of the media industry, such as camera operators. It is important to emphasize that our trade union is for journalists who consider themselves part of the media industry. An obligatory condition for joining the union is to prove the fact of publications in the media. When considering a candidate’s application, we always ask for a link to their publication in the media to confirm the journalist’s status. But, given the current trends in media development, this is not an issue at all.

AA: And in this sense what is a publication? A Facebook post, a YouTube video, or a complete article in an online media or materials to this article?

VY: This is a questionable issue. In the modern world, media boundaries are blurred. A regular social network user, when gaining popularity and increasing their audience, can affect the political situation in the country. Blogs, vlogs, public groups, telegram channels, etc. come to replace the printed press. Personally, I became a journalist as the author of several corporate blogs. I have never worked in the printed edition, but for 7 years I have been a member of the trade union of journalists, which greatly helps me in my work.

AA: However, many do not agree with you that a drone pilot is a media worker.

VY: If a person does not consider him- or herself a media worker they will not be able to enter the union and get appropriate legal support. Although personally, I am sure that any drone pilot is a potential media worker, I cannot make pilots accept my point of view. Yes, we received a lot of criticisms, but also a large number of applications for union membership. PUDJ has and, accordingly, provides its members with full support from the International Federation of Journalists and IMUU and is a popular organization in Ukraine.

AA: Do you think that safe and lawful conduct of business with the use of drones in Ukraine should not give all the pilots the status of a journalist, but work towards a change in legislation, shaping it in such a way that the drone business would be completely legal without connecting it to the media industry?

VY: Indeed, membership in the PUDJ is only a way to resolve the issue of obtaining data and legal support for the profession. We must ensure the right to fly in the State Aviation Service’s regulatory documents.

The creation of the PUDJ was caused by a clear desire to protect and provide legal support to workers performing various types of activities with drones under conditions of fairly uncertain legal status as pilots/UAV operators, and the entire industry in general. (Read our posts Drones vs Ukrainian legislation and Drones. Legislation news in Ukraine).

Indeed, the requirements for aviation works in Ukraine do not make exceptions and relaxations for the drones regarding the need for obtaining various permits and certificates. And given the lack of procedures for obtaining these documents for UAVs, actually, jeopardizes the very possibility of legitimate UAV business. 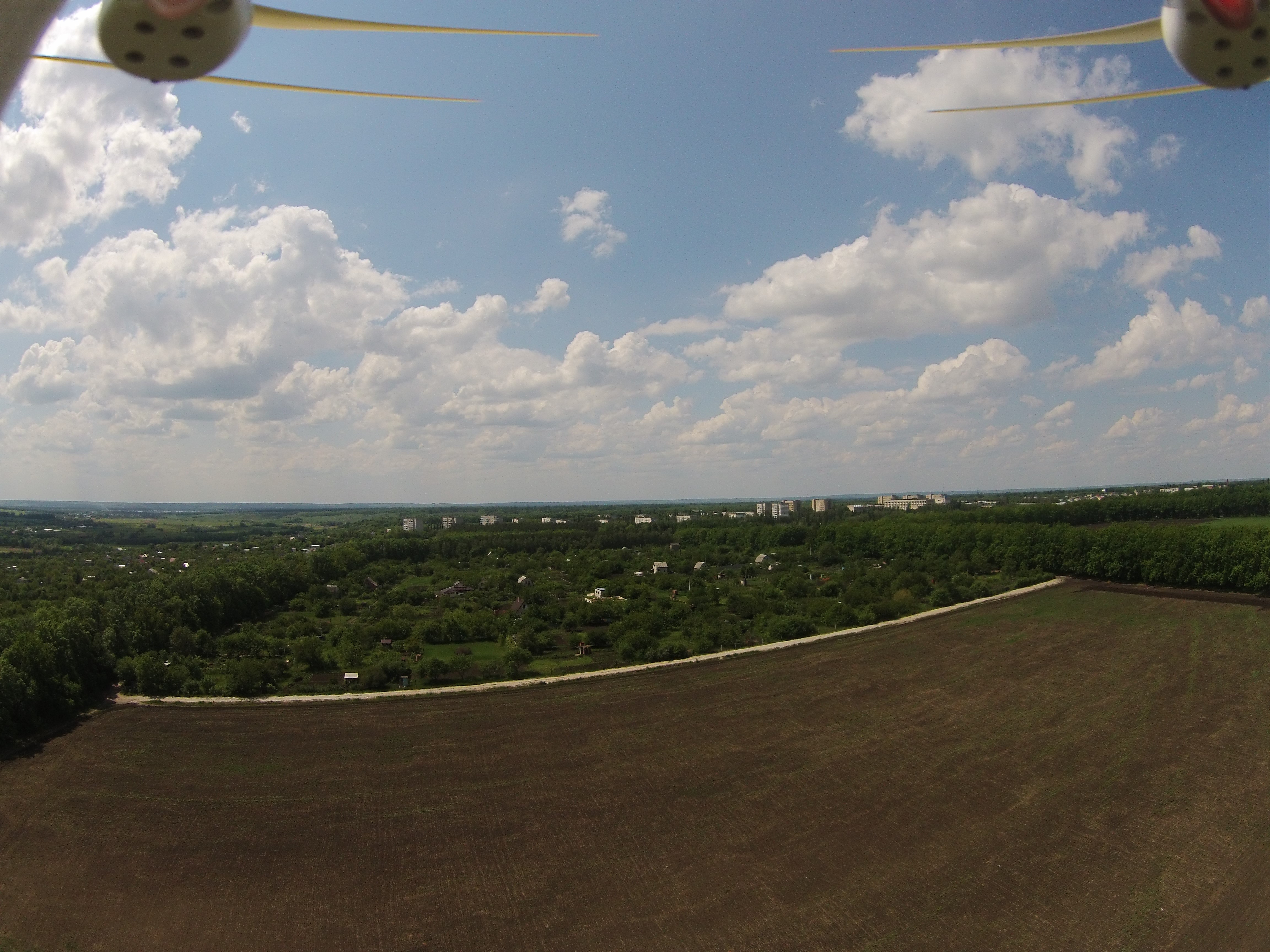 A drone in the sky. What is it there for? Entertaining the owner? Competing at speed? Conducting aerial photography for mapping or collecting data for the media? This influences the status of the operator and the ability to perform flights.

However, the attempt to “draw” the pilots of drones into journalism, in our opinion, is not convincing, because according to the Law of Ukraine on Mass Media referred to by the PUDJ, the media are considered to be only printed publications, and a journalist in accordance with Art. 25 of this Law is a “creative worker who professionally collects, receives, creates and is engaged in the preparation of information for a printed media and operates on the basis of labor or other contractual relations with its editor or engages in such activities under its authority, which is confirmed by a press card or other document issued to him/her by the editors of this printed mass media”.

That is, in fact, today a drone operator can be considered a journalist only if he/she works on the basis of an employment contract in the editorial staff of the printed media. This, in the vast majority of cases, is not true. Or, if that person is a TV/radio journalist, that is, according to Art. 1 of the Law on Television and Radio – a full-time or freelance creative worker of the broadcasting organization, which professionally collects, receives, creates and prepares information for distribution.

Most publications, that are using drone-collected data, are made by online media, which today still have no definite legal status.

The freest interpretation of the law makes it possible to refer websites to the media, but in this case, only a person working in the media as an employee, or on a freelance basis, can be considered a journalist, based on a civil law contract. Consequently, a journalist can not be considered a person who simply makes postings on social networks, or uploads videos to video hosting at their own discretion.

Thus, the issues of the trade union of “drone journalism” also affect the interesting but still unresolved conflict of the status of online media entities and the status of a journalist in the modern world of digital technologies.

In our view, the creation of PUDJ is an important step towards the development of a professional drone industry in Ukraine, but it does not solve the problem, but only emphasizes its availability and the need for an urgent solution. And it seems rather unfortunate that there is no general desire to solve common problems in the Ukrainian drone community.

Public discussions, which covered the concept of the development of UAV, demonstrate the lack of desire of drone business representatives to change the status quo. The muddy water of an uncertain legal field, which so far enables to work “how it goes”, still satisfies the not-too-developed drone industry of Ukraine. However, this is a temporary phenomenon and a dead end.

Drone.ua, which is always a step ahead of others, understand the situation well and aspire to change.

What changes should we expect? What is the drone industry in general, and what are the professional requirements for employees in it? These are interesting questions that may need to be discussed in the following posts.