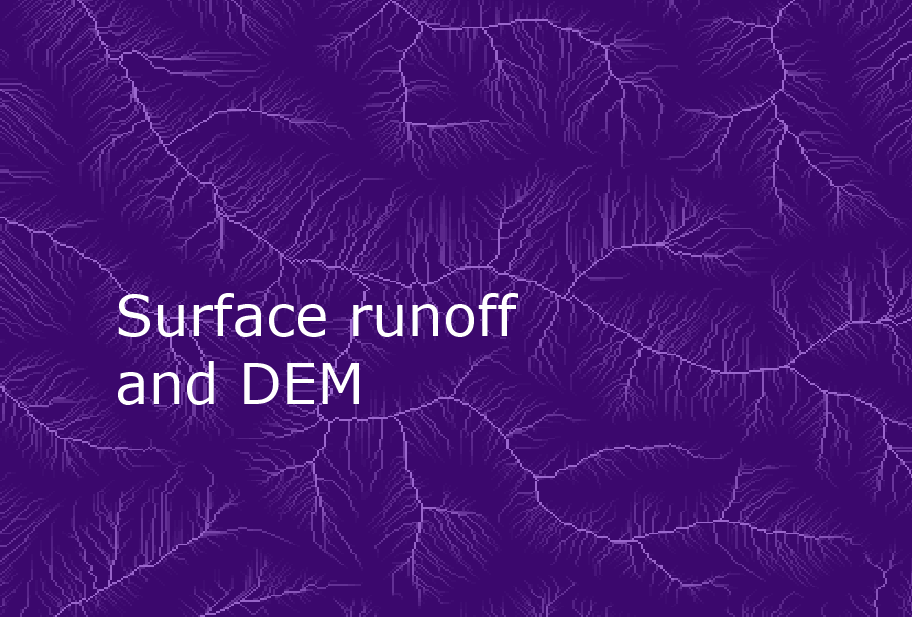 However, first of all we need to dive into existing world of geomorphology for complete understanding of importance of this question.

Terrain is a strong regulator of surface water runoff, that is the part of precipitation that flows on top of the earth’s surface under the force of gravity. As far as Ukrainian agricultural sector is concerned, regarding the physical and geographic features, the issues of water runoff evaluation and regulation are not a matter of life and death per se, but a matter of least 10 billion USD. According to experts, Ukrainian economy loses this amount due to water runoff processes annually. There is a second invaluable financial aspect: better water runoff control and retention of moisture in the fields would increase crop yields significantly. Lack of moisture is a major limiting factor of the national agricultural production.

Let’s define a few terms that are important for structural terrain analysis.

The hydrographic network is a network of declines along which water flows. On topographic map or a satellite image this network looks like a branched tree or in the language of scientific terms, it has a dendritic structure (fig. 1) 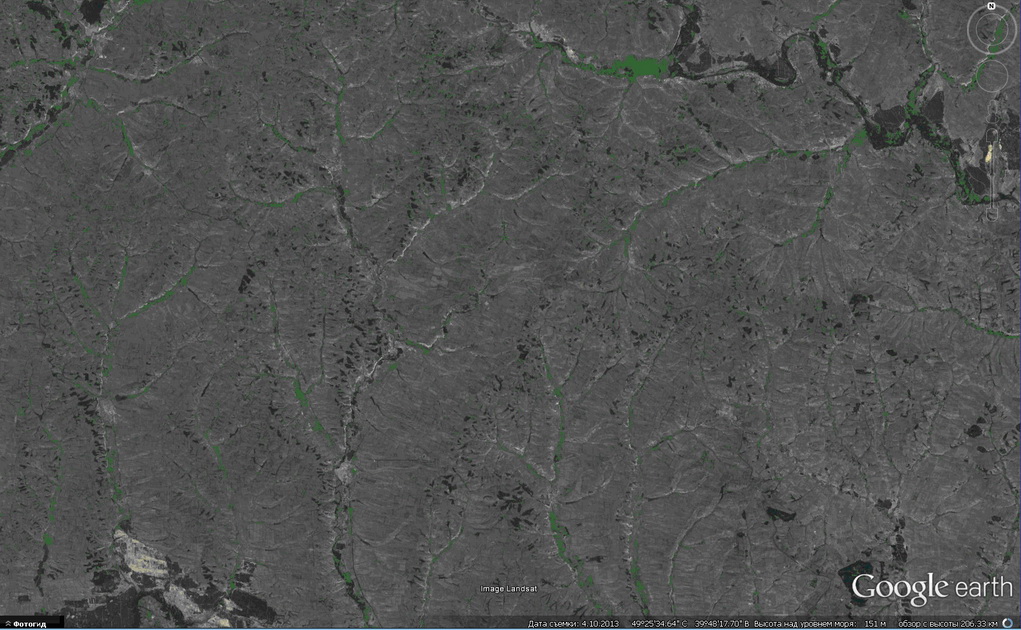 Interestingly that among all the planets of our solar system this ordered tree pattern is only typical for the Earth and Mars (fig. 2). By the way, at one time photo of this fact caused a number of hypotheses about similarity of conditions of the terrain creation on the Earth and Mars, and became one of the main evidences for a possibility of water presence on the red planet, and consequently – the presence of life. 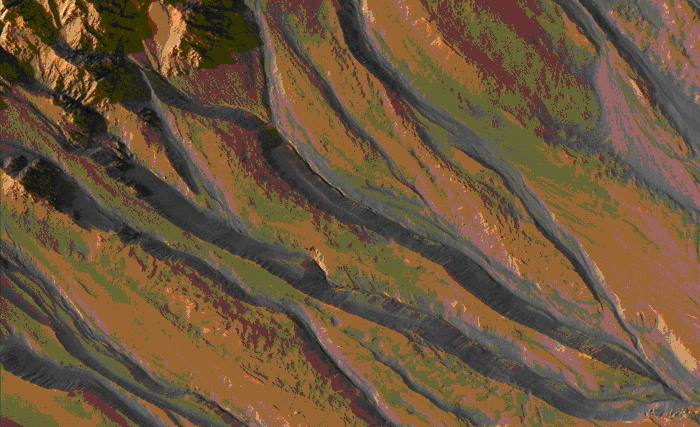 The upper part of the hydrographic network is called overland and it has no regular watercourses. Overland network includes such landforms as basins, coombs and ravines.

A runoff basin is the upper element in the classification scale that is characterized by small depth (0, 5 – 2 m) and gentle slope (> 3°). Often it is even difficult to notice it on the terrain and identify it on the map. 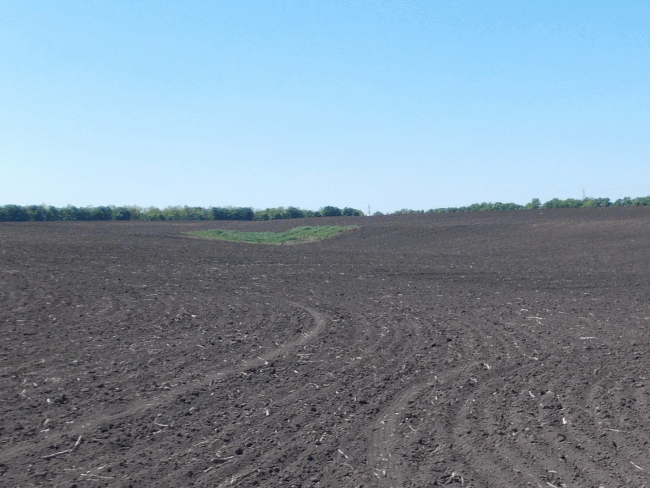 Basin gradually passes into a coomb, which already has marked slopes and bottom and clear outlines in the terrain. Coomb can have a depth of 5 – 8 meters and steepness of the slope around 10°. 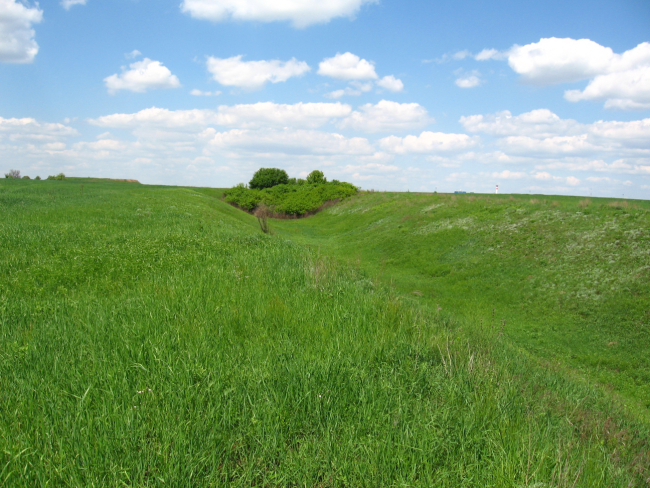 In its turn comb goes into a ravine, which is a linear form of the terrain and has clear defined edges – inflection lines of the slope. Lower this lines ravine becomes steeper. It is characterized by significant depth of 20 m and steep slopes to 30-40 °. 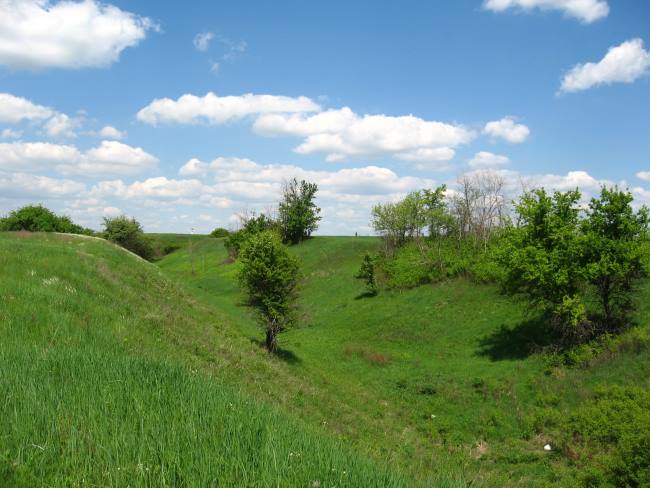 Ravines merge with the river valleys. Perhaps they are the most familiar land forms for our readers, because of their conjunction with such a beautiful natural objects as rivers. 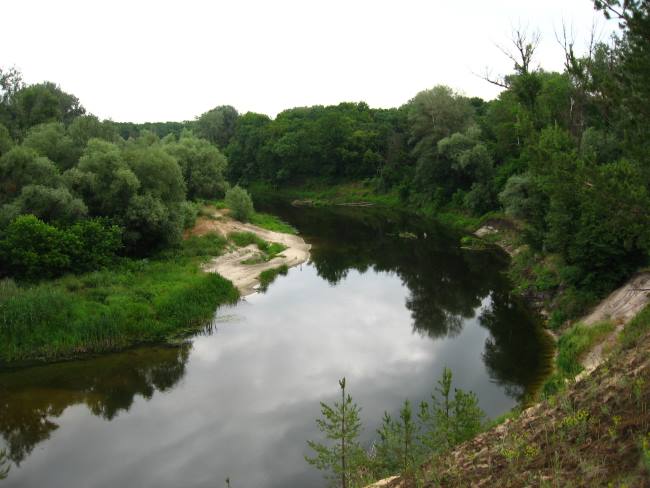 An imaginary line that passes through the lowest points of the bottom of all listed terrain elements of the hydrographic network is called a thalweg.

Visually it can be identified by the bed of any regular watercourse. Thalweg network is well manifested during heavy precipitation. Temporary water flows move along them.

Joint system of watercourses (hydrographic network) can be considered as water supply system/drainage system of an area. Geographers, prone to the poetry, call it blood circulatory system of a landscape. The similarity between them at the level of organization and functioning are amazing. Similarly to the blood circulatory system, hydrographic network has complicated structure and high level of self-organization that allows providing drainage of large areas without critical issues. Research shows that it is difficult to design a similar artificial system even for a small area, which would just “fit in” the existing terrain without distorting its balance.

Gullies – signs of linear water erosion are first of all associated with thalwegs. One might think that the fight against them should mainly focus on backfilling, leveling, neutralization… In fact, in cases of very high loses this approach works, but there are many unfortunate examples when a new gully emerged near one that had been removed previously.

Why does this happen? The reason is the unsystematic approach to the terrain evaluation. Thalweg, or to be more precise – the erosive terrain form it belongs to –, is just a natural display of the optimal drainage mechanism and without neutralizing its reasons, fighting with the manifestations is futile. As in the case of human circulatory system, intervention into the hydrographic network has to be very careful and based on the comprehensive analysis of all landscape conditions. Sometimes easy “information” intervention is enough to stop the growth of gully. In addition, sometimes complex and costly but not thought actions cause unwanted effects in areas, which would seem completely unrelated to the place modified in the first place.

Terrain and, mostly, the area where the surface runoff comes from, determines emergence and functioning of each watercourse. This area is called drainage basin or headwaters.

By analogy with wildlife, we can call it a feed-zone of the watercourse-thalweg. In addition, this is not the end with biological associations. In the “world of terrain”, for example, there is a competition for spatial resource, which can lead to the situation than one-river intercept the runoff of another one.

It is obvious that the larger the river, the more catchment area it needs. For example, Dnieper “feeds” on an area of 504,000 км², and a small gully formation can be limited to a few dozen hectares. The total watershed of the Dnieper, like a Martyoshka doll, includes watersheds of tributaries and smaller network elements.

There is a strict rule of hydrographic network organization: “a watershed is always situated between two thalwegs”.

Watershed – is a dividing line of the territory on the oppositely oriented slopes, that accordingly “guides” surface runoff to the opposite directions (fig.6). These watersheds merge and form boundaries of a catchment area.

Thalwegs and watersheds are known as structural terrain lines, they have high importance in the structure of the catchments.

Traditionally, allocation of this lines (or construction of the orographic scheme) is performed on a regular topological map. The points of the maximum contour line bends are used to define the lines. They are delineated by crossing these points accounting for slope direction. It is an easy procedure if you have some skills, but it’s easier to show than tell.

Despite its ease, manual drawing  undoubtedly has disadvantages:

Errors when defining the highest elements of the erosive network, which can be obscure on the map;

Subjectivity, especially during selection of the watersheds that have no such distinct structure as thalwegs.

In case there is a large amount of work and unclear terrain features, those disadvantages may lead to unwanted consequences. Let’s look at the typical terrain of the floodplain terraces of the Dnieper (fig.8). Selection of the structural lines on this map will be a difficult task even for a professional. It’s a good reason to use GIS tools.

In addition, we haven’t yet considered the important question of quantitative calculations. For example, determining of the catchment area or the thalweg length may look simple, but it is a very hard work. Moreover, of course, using a DEM and specific types of analysis will allow to perform all the quantitative calculations quickly and accurately. 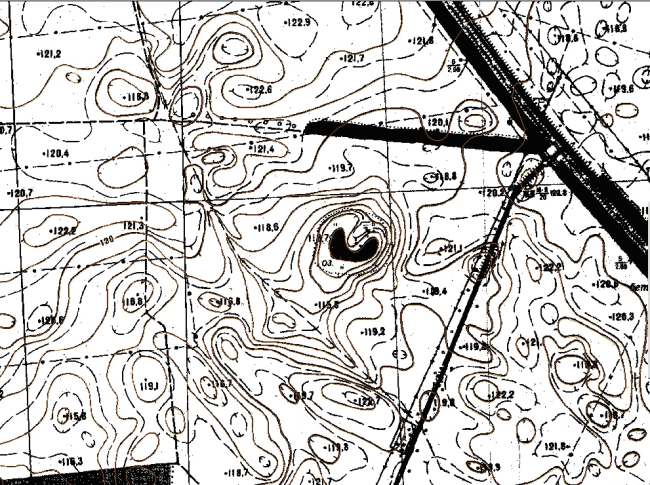 Figure 8. Terrain of the Dnieper left bank landscape. Fragment of the topographic map

Figure 9. a) DEM of the area, presented on the fig. 8, and b) determined thalweg network

A number of GIS programs give an opportunity of hydrological analysis. Some of them are proprietary, like ArcGIS, Idrisi, TNTmips, others, which is pleasant,  are free – GRASS, ILWIS, SAGA, etc.

First step for such analysis starts from determining the slope direction for every cell of the DEM. For that its absolute elevation is compared to its eight neighboring cells elevations. O’Callaghan and Mark (1984) proposed this method named as D8. If a pixel with the lowest elevation value is located in the northeast (right diagonal) from the central pixel, the latter one is appointed with a value of 1. If the lowest elevation is associated with the eastern pixel, the central pixel gets an attribute of 2, southern – 8, western – 32, etc. 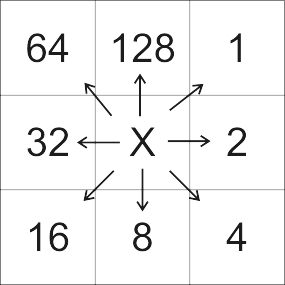 Raster showing each cell’s water movement direction with color will be the result of using D8 method.

Figure 11. DEM a) and b) direction of the water flow raster

For the next step, it is advisable to check the model for the presence of drainage zones – areas where elevation of heights are smaller than the height of catchment boundaries. Often those areas are a manifestations of incorrect raw data, but they can characterize natural phenomena such as steppe saucers or karst funnels.

If there are no such objects in the research area, these features are errors that need to be fixed. For correction we can use filling drainage areas to the value of minimal height of the catchment area boundaries which these areas belong  to.

The raster showing flow directions is also used to determine the watersheds (fig. 11). After filing the decrease zones, we should check the resulting raster and, if necessary, make corrections to it. 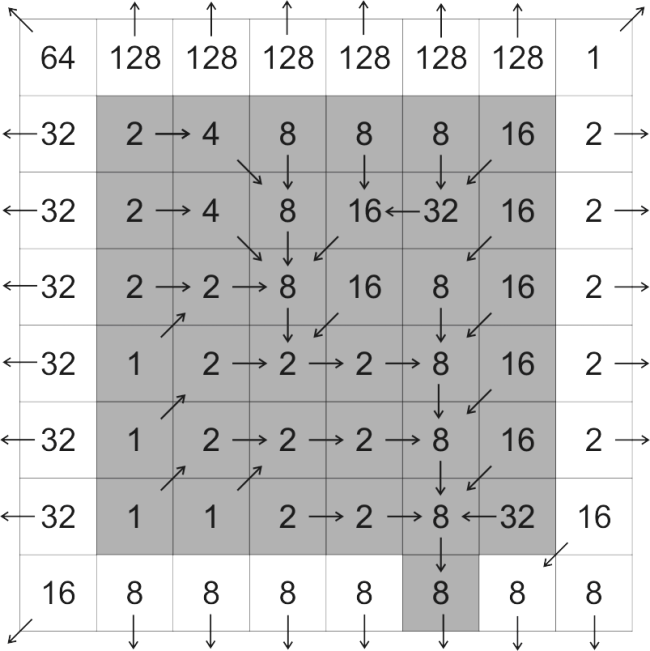 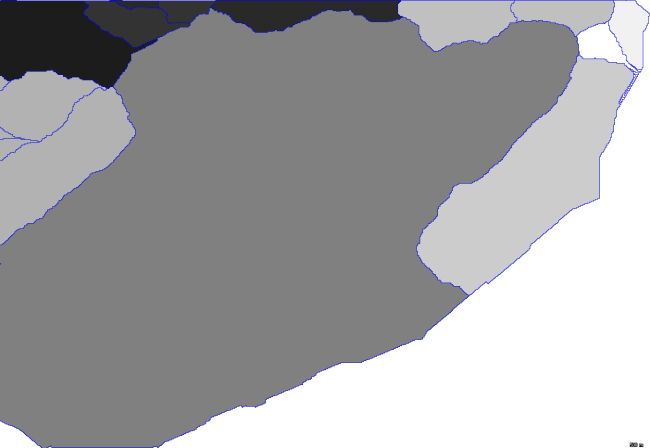 After raster correlation of the flow direction, the runoff accumulation raster is built. Each cell in this raster is the sum of cells situated above it on the slope and their flow is directed into it. 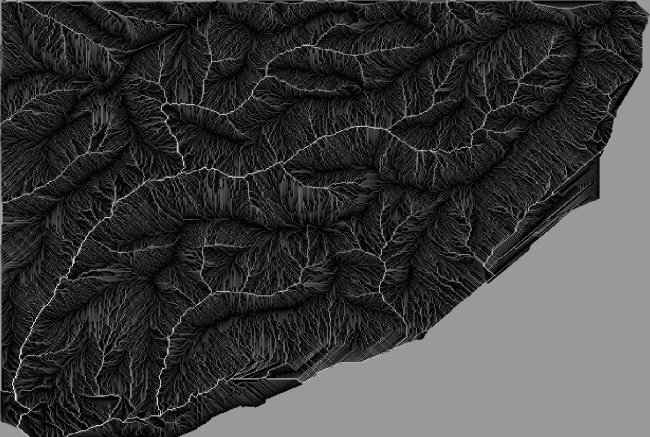 Figure 14. Raster of the runoff accumulation

It is the runoff accumulation raster that is used for further thalweg system delineation. 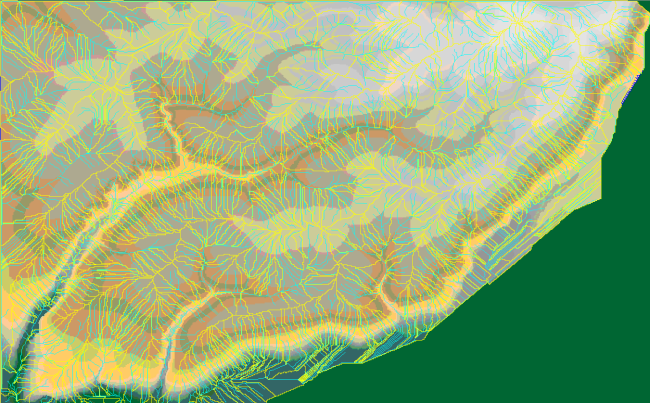 In figure 15 we can see a result of a full terrain structural analysis that was performed in TNTgis. Blue lines show thalwegs, yellow – watershed boundaries. It is possible to change settings in the program to modify detailed structure of the terrain.

How can this information be useful?

It can be used by anyone, who works with terrain and water streams. Of course, these are scientists, who solve various theoretical issues, engineers-surveyors that design environmentally sustainable agricultural landscapes, and they may be just advanced farmers, who care what happens on their lands.