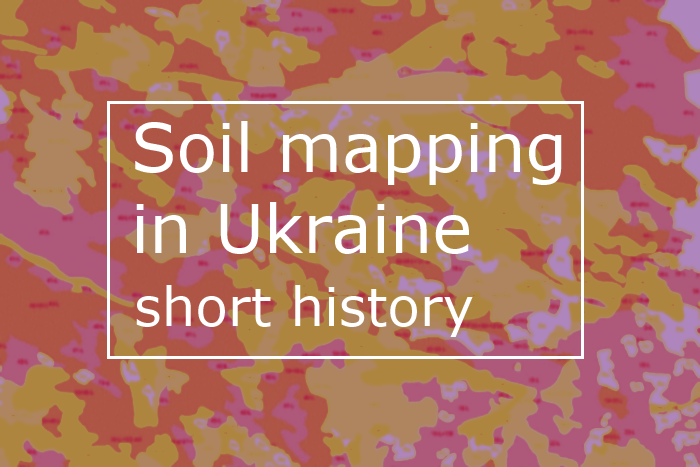 What is a soil map? What is it for? How are soil maps composed? What is the current situation with soil mapping?

Not without reason 2015 was declared the International Year of Soils by the UN. Without thinking of it, we are indebted to the soil on an everyday basis not only for food, clothes and home, but also for clean water, air and even a favorable environment for life as a whole.

Whatever we aim to get using soil, we must know what it is we are dealing with. In other words, to know which soil are beneath our feet, how they are spread and changed across an area that is of interest to us.

The first helper in this is a soil map. 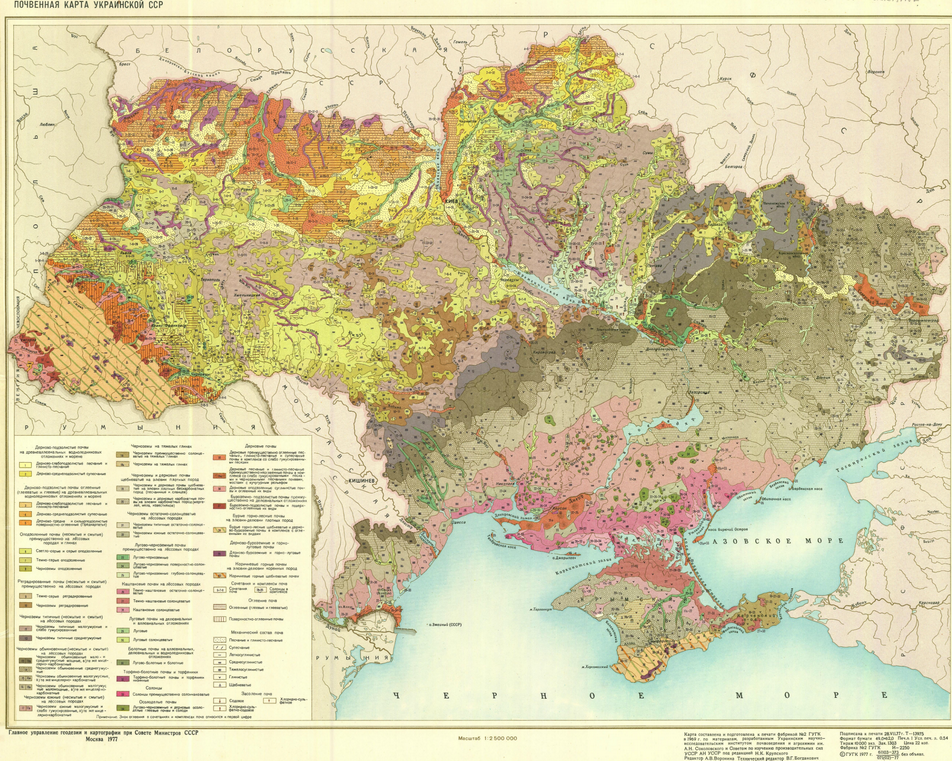 A soil map contains a considerable volume of information on the spatial distribution of soils and soil parent materials. This map will tell the following to someone who is familiar with soil science or at least would understand soil nomenclatural names provided in the map’s legend:

– soil fertility, its agronomic features and suitability for growing certain agricultures or, for example, tree species;

– presence and intensity of erosion, soil sodification and salinization;

– presence of soil waterlogging and its causes;

– rocks upon which soils are formed.

It is clear that such an important source of information is essential not only for agronomists, foresters, horticulturists, or landscape designers, for whom soil is a basis of production. Soil map is essential for planning any environmental measures, for land management projects creation, for decision making in territories development, for geological surveys etc. Large-scale soil mapping is a basis for land record, quality assessment, and naturally, turnover.

Until today the principal cartographic source of information on Ukraine’s soil cover are the materials of a large-scale soil survey that was carried out back in 1957-1961.

Specific to soils are their continuous spatial distribution and three-dimensionality. Soil is a hidden object – to identify and describe soil it is necessary to unveil a soil profile for its whole depth, and that is at least 1.5-2.5 meters. Which means it is impossible to create a soil map based solely on visual or even instrumental analysis of its surface. 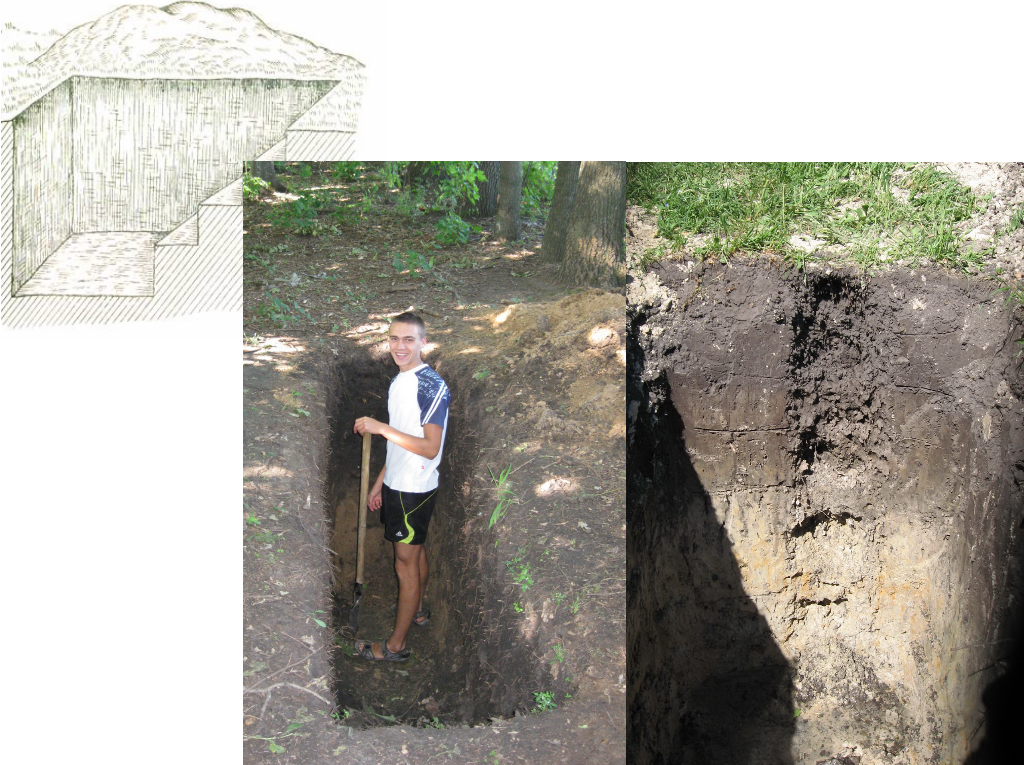 Soil profile. Soil pit. According to the methodology, to create a 1:10 000 soil map it is required to lay 1 full-profile soil pit every 10 hectares.

In its time a large-scale soil survey was an exceptional event – with no bit of exaggeration – and unprecedented both in its scope and scientific and practical results. This survey was carried out on the territory of approximately 45 million hectares, more than 1600 people were involved working in soil brigades and expeditions at 36 specialized institutions and higher schools of Ukraine. Survey was carried out up to the highest scientific and methodological standards as for the post-war conditions of the time. Soil brigades, apart from the soil scientists, always included geobotanists, agronomists and land surveyors.

We can only roughly estimate the number of soil pits, half-depth pits and ancillary pits that were excavated during this survey of the whole Ukraine’s territory.

The experience of 1957-1961 soil survey demonstrated that in order to create large-scale soil maps, at least one full-profile soil pit should be laid every 10 or 25 hectares (depending on scale). So, despite the exact number of pits staked at that time during the 45 million hectares of land survey is unknown for certain; it should have reached around two million.

These soil pits were not just staked and described, but soil samples were taken in them from every genetic horizon. Accordingly, millions of laboratory analyses of soil have been made in the pre-existed and new agrochemical laboratories organized to meet the survey’s needs.

It was this titanic effort that later embodied in color sheets of soil maps. After the survey had ended, every farm got a package of material on soils’ agronomical characteristics. Those were:

③ ‘A soil sketch’ (a soil report) – an agro-genetic description of certain territory’s soils with recommendations of the most effective land use (crop rotation planning, organic and mineral fertilizers application, liming and gypsuming, hydrotechnical melioration implementation, protection from ablation and eolation etc.).

Large-scale soil maps compiled as a result of the 1957-1961 survey became a base for the subsequent creation, by the means of generalization, of mid- and small-scale soil maps of Ukraine.

Even today there is a demand in digitization of those paper map and corresponding offers.

A paper and a digitized map of Khmelnitsky Region – source

The next years, from 1969 to 1991, soil parties of ‘Ukrzemproekt’ (now it is the Land Management Institute) carried out the so-called ‘soil survey corrections’ which in fact were the refinement of the first survey with creation of the more detailed soil maps of certain farms. So the last more or less systematic work on soil mapping of Ukraine had already ended 25-30 years ago.

Anyway, time goes by and even such an inertial system as soil is changing. Soil is eroded, salinized, becomes waterlogged, or, vice versa, dried, its fertility changes as the result of humus and nutrients loss.

Strictly speaking, ‘best before’ period for soil maps created on survey data from the 50s-60s of the last century has expired long ago. Professionals say that relevance of soil survey materials is lost as soon as in 15-20 years.

Besides, soil mapping capabilities have also considerably changed over the last fifty years. New methodological approaches to soil mapping have been developed. They are based on active use of geostatistics, methods of remote Earth sensing and GIS analysis of relief (more about it later).

Modern methods allow to considerably improve the accuracy of soil variety deliniation, to distinguish eroded soils much more correctly, to add detail to the information on soil cover, and to lower the complexity of the soil map creation.

For more than 10 years now, a situation, strange at the first sight, has been preserved in Ukraine:

Still, there are no up-to-date soil maps in Ukraine, and professionals have to use paper maps which have lost their reliability at least 20 years ago, or to use the results of their digitization, although…

– on the one hand, there is an urgent need in modern trustworthy digital soil maps as the concentrated source of information on soil cover;

– and on the other hand, in theory, in Ukraine there are almost all means to update soil maps: methodology is gained, innovations are developed, and there are specialists required to carry out a soil survey (they may be available just temporary though, we have to stress, as the state doesn’t seem to take any efforts to support soil science).

The main thing is missing – it is money in our long-suffering state budget. There was no money ten or five years ago, and there is even less now. It’s a fallacy to hope any budget is possible in the near future.

Complete large-scale survey of the soil cover of the whole country was possible only in the conditions of the authoritarian soviet regime and state ownership of the land. Now it’s other times, and consequently, a road to the update of soil maps seems to go only through the landowner’s wit and wallet.