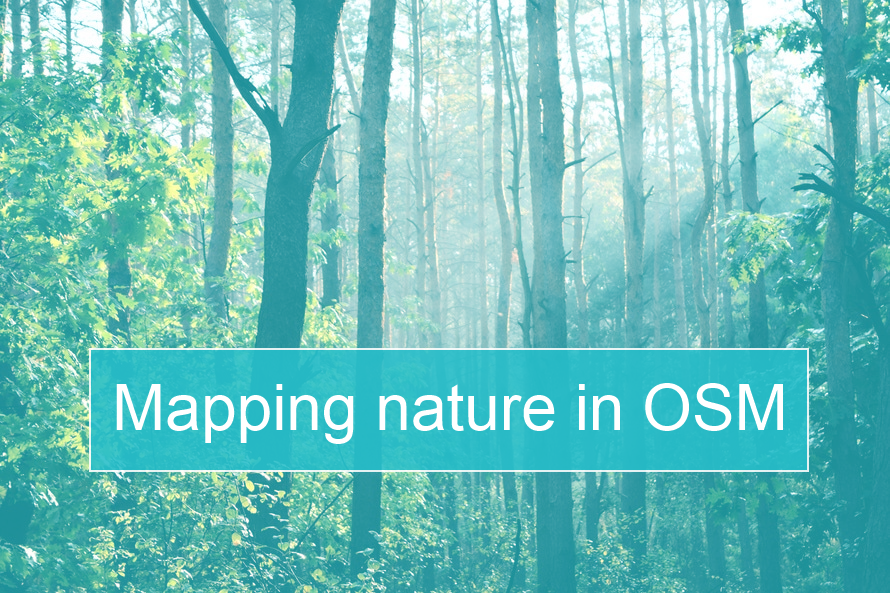 OpenStreetMap (OSM) is one of the most promising web platforms for the crowdsourced mapping of the world. Openness, simple editing, advanced documentation and an active community are the main OSM advantages over other web solutions that claim to be global.

The main OSM advantage is, as for me, its extensibility. Anyone can initiate mapping something that others still had not thought of. This can be implemented with tags.

Any OSM feature, whether it is a point (single tree, monument etc.), a line (roads, rivers, pipelines, …) or a closed outline (settlements, buildings, forests, etc.), is accompanied with tags that provide certain traits for amorphic geometry. Based on tags OSM Server renders an image that we see on our browser tab . Roughly speaking, forests in OSM looks green because it had been decided to draw all polygonal features with tags ‘landuse = forest’ or ‘natural = wood’ using that color. A user can add a whole bunch of tags to one feature, but they must not contradict each other (Fig. 1). 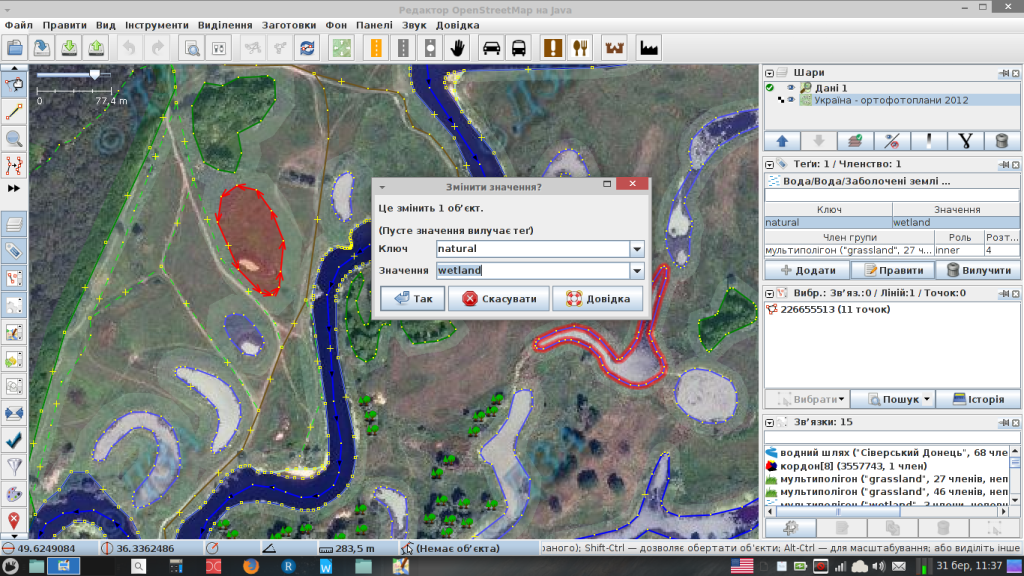 Each tag consists of two parts: a key and its value. For example, all roads in OSM (from a motorway to a forest path) are marked by a “highway” key. But only the «highway» marked by a «path» value is displayed as a small pathway while a «service» value transforms the road into a service route.

It is important to remember that there is a hierarchy of OSM tags. The primary tags describe basic characteristics of a feature, whereas the secondary ones describe specific characteristics. For example, we need to draw an unpaved road. In this case the primary tag will be “highway = track” while the coverage type could be optionally specified with a secondary tag “surface = ground”.

OpenStreetMap, as you might have guessed from the title, initially was a map of streets and roads. Not surprisingly, OSM-mappers are paying, in general, more attention to urban areas than natural objects. Moreover, globalization has caused a strong unification of the artificial objects. There are almost no differences between a gas station situated in the USA and in Kenya, for example. Not so much for forests or meadows. Anyone who has at least a basic biogeography knowledge realizes that the natural communities in various parts of the World differ greatly. Moreover, they also differ depending on the economic traditions, as we will discuss below. So mapping of the living world in OSM is still not regulated or very intuitive.

Of course, if one is persistant any question would be answered in the official Wiki (which I highly recommend, at least read the “Map Features” section!) or numerous OSM forums. Below we will consider the main approaches to natural features mapping and problems arising from it. Finally, I offer for your attention my own Tags Key to define the most common natural features that could be found in Ukraine.

The most of the natural and semi-natural objects are distributed between the two groups of primary tags: the “natural” and the “landuse”. The first one is designed for the natural objects while the second one for the man-made. The logic is clear: if we see a virgin steppe, we choose a “natural = grassland” tag, in case of a field of wheat – the “landuse = farmland”. But what if we face a hayland, a pasture or a fallow land overgrown for several years? Are these natural objects? Partly yes, because the current vegetation had been formed by itself. However, it is clear that the structure of these ecosystems was significantly affected by humans.

The main part of OSM-mappers digitize remotely, using satellite imagery. However, probably it is hard to tell from an image whether someone uses that meadow as pasture or not.

Similar contradictions in OSM may occur at every step. The best-known ones relate to forest mapping. The Wiki says: Use tag “natural = wood” if you map a natural forest and “landuse = forest” if it is a managed forest. Also “natural = wood” tag is used to refer to small groups of trees that have grown naturally, but fall short of  a “forest” by size. Hence there is a confusion with woodland tagging in OSM.

The reasons for this separation is easy to explain knowing the history of the project. OSM was born and raised in the UK – the country of the highest land-use degree. Here the main part of natural forests were cut down and replanted. Those woodlands are maintained by forest management. At the same time small patches of natural forests were preserved as hunting lands where any cutting was forbidden. It is not difficult to divide “natural” and “managed” forests in this case.

In Ukraine, for example, everything is different. Three-quarters of Ukrainian forests are gathered in large woodlands where forestry is conducted (or had been conducted at some point) as a periodic thinning or clear cuts in certain stands. In these forests, more and less impacted woody stands are mixed together. It is not always possible even for the experienced forester to distinguish “natural” forests from “artificial”, let alone a map amateur using remote imagery.

One of the possible solutions to this problem is offered by the new “landcover” tag. The idea’s authors suggest to abandon the distinction between types of the environment on the basis of “natural-artificial” and instead introduce a new tag that would not describe how to use the land, but what it is covered with. For example, all areas with woody vegetation would be marked “landcover = trees”, while areas overgrown by grasses – “landcover = grass”. After all, anyone can always make the description more precise using secondary tags. This approach avoids ambiguity about the history of land-use and other factors unknown to a remote mapper. Unfortunately, this progressive, in my opinion, approach has not yet become official and is rarely used.

As we talked above all OSM tags are divided into primary and secondary. It is enough for map rendering to know the primary tag. But often it is  secondary tags that provide a real biological sense for the feature. For example, we can define the forest (primary tag “natural=wood”) as deciduous (secondary “leaf_type = broadleaved”), coniferous or mixed ( “leaf_type = needleleaved” and “leaf_type = mixed” respectively). 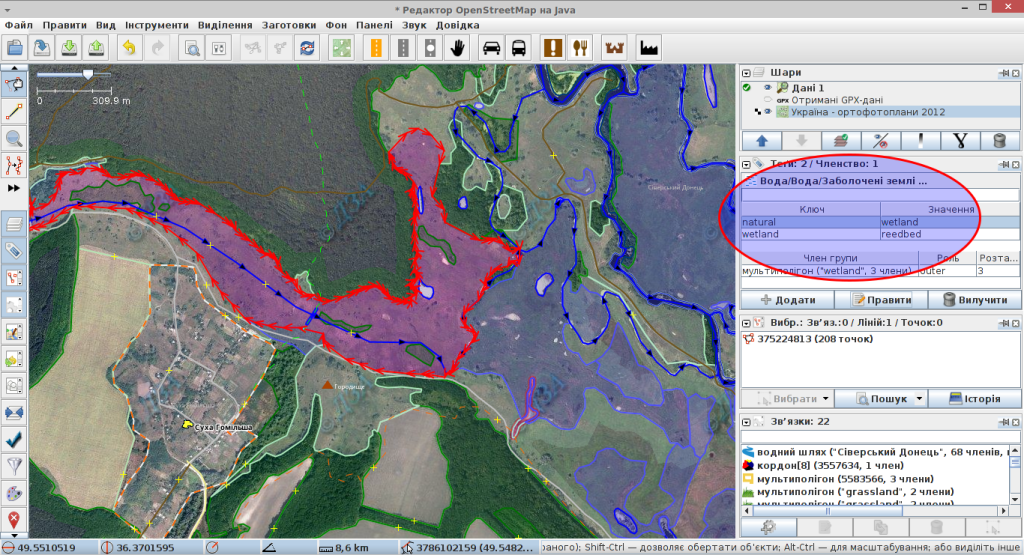 With some secondary tags, we can turn our OSM map into a real spatial dataset. For example, using the tag “taxon = *” you can specify which tree species compose the forest (mainly used for single-dominant communities). If mapper has a thorough information, they can also specify types of plant communities (“plant_community = *”) or habitat type (“habitat = *”). The only trouble is that OSM-community has not yet reached final agreement on what system of classification of plant communities or habitat to use. I think in the near future, these issues will be agreed upon.

Which natural feature tags are missing?

Of course, a lot of natural and semi-natural sites still do not fit into the current tag system. Some examples are fallows disused for long time that are overgrown, sparse woodlands, forest-meadows, forest fire places and windfalls, and much more. Although a lot of them could be described by secondary tags such as “plant_community” or “habitat”, but the problem is that it’s difficult to determine the primary tag needed for the rendering!

I am a field biologist, and I often have to identify species or even genera  unfamiliar to me. In biology, the identification keys are traditionally used for that. I think that OSM-beginners often face the problem of how to identify tags for a natural object. So now I will try to summarize my tagging experience with the Key.

The Key is a result of the combination of OSM Wiki info and my personal convictions. I did not include a lot of tags that are considered deprecated, not yet approved or that seem unfortunate to me.

I am very grateful to Yegor Yatsiuk, Alona Prylutska and Anton Biatov for their comments which helped to make the key below.

How to use this Key?

Each numbered block contains two (rarely more) alternative statements. If you agree with the first one (for instance, your feature сorresponds to “moist site”) than go to the referred block. If not, please consider the alternative statements the same way. Consequently you will walk up to the appropriate tag written as “key”=”value”.

Reference: Rivers wider than 12 m are drawn as polygons (tagging as waterway=riverbank) and lines (waterway=river) simultaneously. It id necessary for correct map rendering at different zoom levels and for routing. 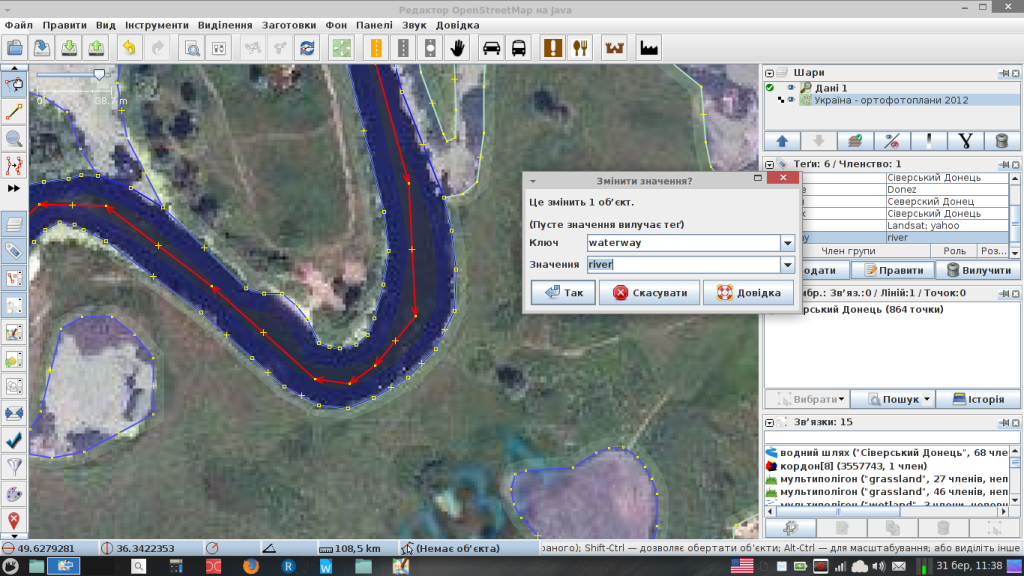 One thought on “How to map Nature in OpenStreetMap: approaches, issues, and a proposed Key to tags”