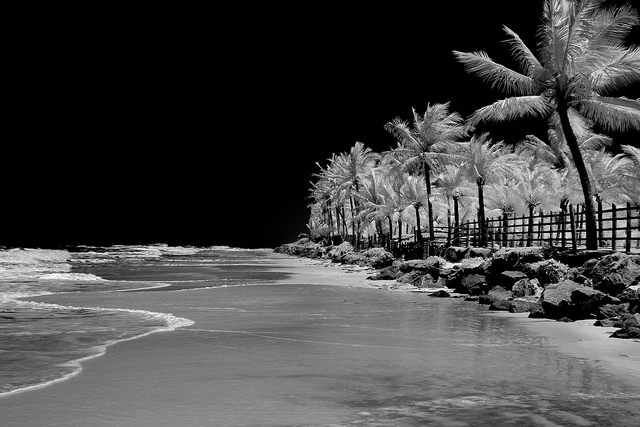 This post is a part of small series on Earth observation basics.

In it you might find out why the sky is black in the cover picture, learn a bit about the interaction of the Earth’s atmosphere and electromagnetic radiation, and what happens due to this interaction.

As we have already talked about electromagnetic radiation, we can move on to another principal component of remote sensing – the Earth’s atmosphere. Frankly speaking, the physics behind some of the processes described below was a bit hard to grasp at first; however, I did manage to find simple explanations. I hope they do make sense in a comprehensive and factual way.

As electromagnetic radiation passes the threshold between vacuum and the Earth’s atmosphere (a very vague one), some things start happening. Here we have got absorptions by gases, water vapour, or dust, we have got scattering, we have got reflectance, and, surely, some radiation is eventually transmitted through the atmosphere and reaches the surface of our planet. The absorption bands – areas of the electromagnetic spectrum that are opaque to specific wavelengths – are caused by specific elements interacting with the incoming radiation.

(Figure 1 – showing the atmospheric absorption bands and the particles responsible for the absorption, adapted from source)

Most of the harmful ionizing radiation is absorbed by the atmosphere creating coziness and comfort on the surface of our planet.
The Earth’s atmosphere is very thick (like 100km thick). Even though the density of the atoms in it is quite low, due to its thickness the total amount of the atoms is extremely large. It is this huge amount of atoms that interacts with the incoming photons.

The gamma radiation and X-rays have quite a high energy. When entering the atmosphere, a photon interacts with an atom – it encounters and transmits its energy to the atom’s electron. The photon disappears. The high energy causes the electron to be torn from its nucleus.
In this case, the composition of the air has no effect, but the amount of the air makes a huge difference.
Although the Sun produces gamma rays from fusion reactions, these photons are converted to lower energy radiation as they travel to the Sun’s surface and are not emitted.

Ultraviolet radiation is mainly absorbed in the upper parts of the atmosphere. The energy of the photons is used to split an O2 molecule into two atoms; then the free atoms combine with an oxygen molecule to form an O3 molecule.
However, ozone molecules are not stable and, when hit by ultraviolet, they are split into an O2 molecule and an oxygen atom.

Specific absorption features that correspond to effects of various gases, water vapor or droplets and dust exist. These are spread from near-infrared up to microwave region of the spectrum.
The absorption takes place because of photons interactions with the molecules in the atmosphere.

Molecules only absorb photons energized with a specific quantum of energy. This must correspond to the amount of energy needed to elevate an electron to a higher energy state, or to elevate the entire molecule to a higher vibrational mode. UV and visible light tend to have enough energy to elevate electrons to new energy states, while longer wavelengths such as in the IR spectra match the frequency of vibrational states ✽.
Rotational and vibrational transitions give rise to absorptions in specific wavelengths.
Depending on the number of atoms in a molecule, the number of possible vibrational modes increases.
A water molecule in a gaseous state, carbon dioxide have three atoms and thus have the same number of vibrational modes, nitrogen has two atoms. However, the energy that can be absorbed by these different molecules is variable. Combined these different absorption peaks create what we can see in Figure 1.

See the molecular vibrations in these slightly disturbing gifs:

Water is responsible for nearly 70% of all absorption of electromagnetic radiation in the atmosphere.
Carbon dioxide is believed to increase the greenhouse effect by absorbing energy in the infrared region; some researches indicate that it significantly contributes to heating of the mesosphere and the lower thermosphere. 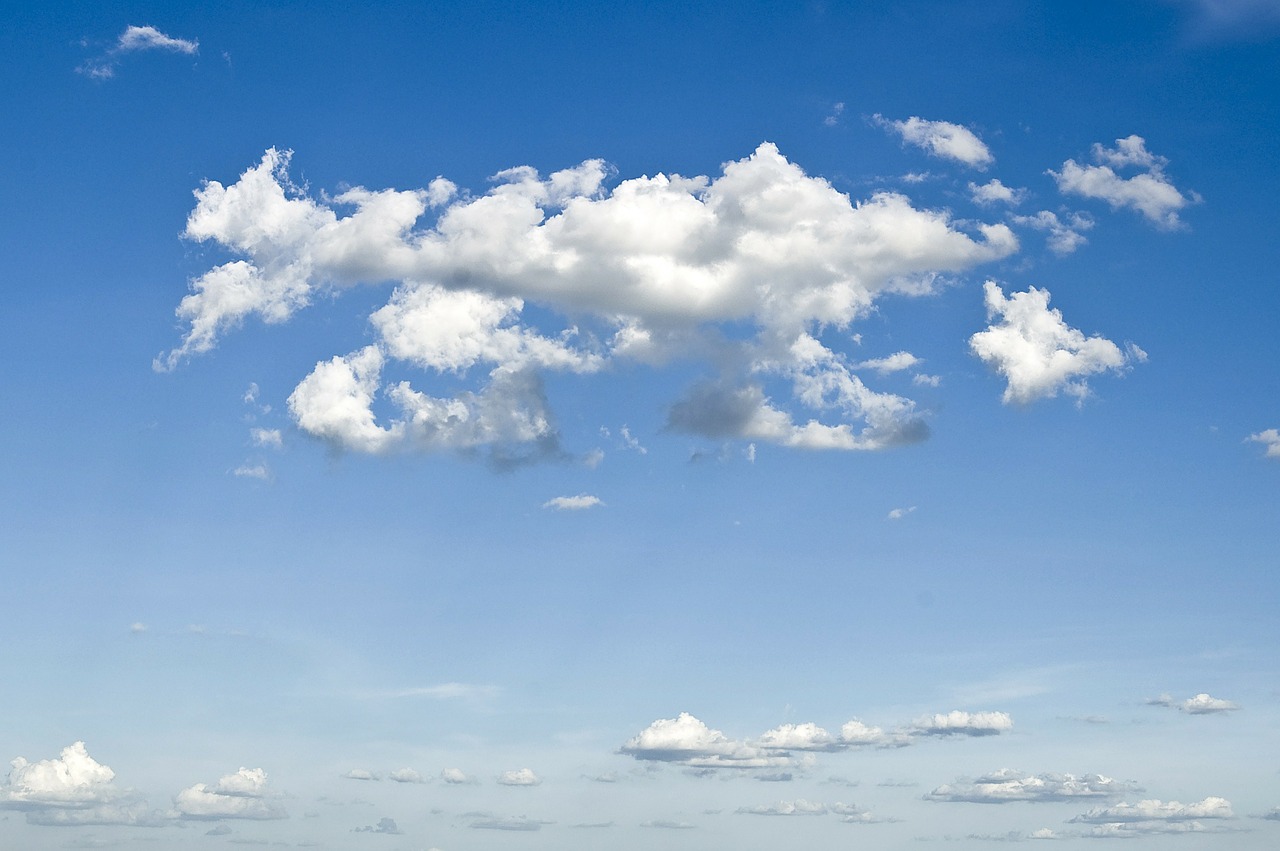 Light scattering is a process of redirection of electromagnetic energy due to interaction with molecules or particles suspended in the atmosphere. This is not like reflection, when the angle at which light travels is changed, but rather the radiation is scattered in various directions (forward, backward and to the sides).

There are different types of scattering according to the relative size of the particles compared to the wavelength of the scattered radiation. 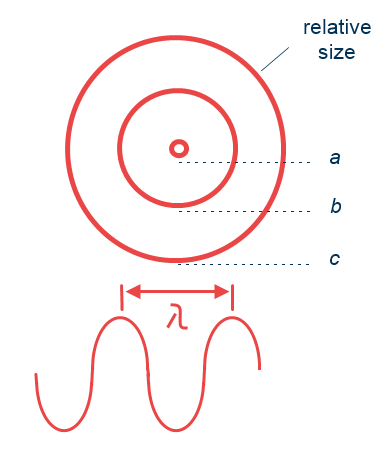 Rayleigh scattering
Caused by molecules of oxygen, nitrogen, small dust.
This form of scattering involves very tiny particles, about a tenth of the wavelength of the radiation (‘a’ in Figure 2) and increases as the wavelength becomes shorter. It is wavelength dependent. This means, that the violet and blue portions of the spectrum are scattered much more than the red ones, in fact, 4 times more. This gives the sky its colour during the daytime. And also at sunset as the sunlight has to travel a greater distance through the atmosphere and gets scattered more and blue wavelength gets depleted, thus the sky appears red.
Actually, sometimes I think I can see the greenish sky as well.

Mie scattering
Caused by smoke, dust, pollen, water droplets.
Mie scattering is caused by larger particles of a size similar to light’s wavelength (‘b’ in figure 2). This kind of scattering still depends on the wavelength, but not as much as Rayleigh scattering. Pure Mie scattering causes the air to appear whitish.

Non-selective scattering
Caused by larger water droplets, dust.
In contrast to the previous types, this scattering does not depend on the wavelength. It involves quite large particles (see figure 2, ‘c’), with sizes much greater than the wavelength. This way all light gets scattered equally, appearing as greyish or whitish to the human eye.

I hope you guys managed to get all the way down here! Great!
To conclude it all, we are very lucky to have all these gases (well, some more than others) and vapours and specks of dust pulled down by our gravity. This way we stay protected, warm and have enough lighting. And we can from time to time enjoy a spectacular sunset!

So, why is the sky black in the cover photo? 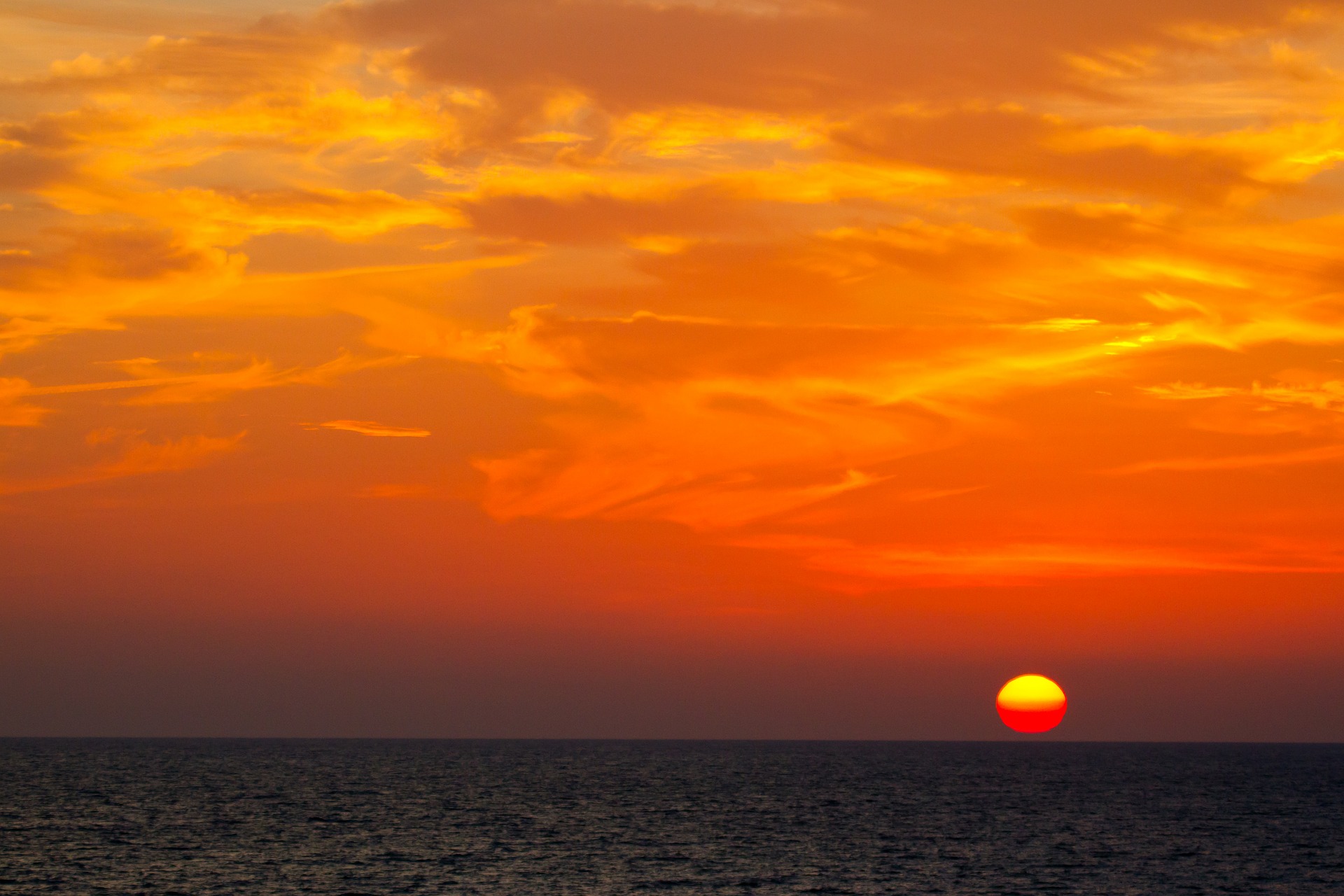