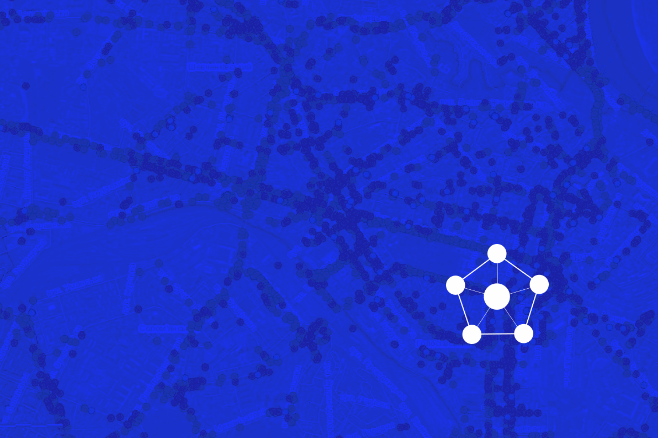 I am pleased that the post about cadastral map of Ukraine caused a lively interest of the community. So let me continue.

Today there are at least 10 cadastres in Ukraine:

It is obvious that such structure of the state “information” skeleton is far from ideal. It provokes duplication of information, inconsistency of data formats and many other technical aspects, which at first can seem unimportant, but in practice they can definitely delay information exchange between ministries and agencies. And “time is money” concept becomes more relevant each day.

By the way, since 7th of June 2016 the Water Cadastre is operating simultaneously with the State Register of Water Objects and Their Parts in Ukraine. Registry data, unlike the cadastre data, are displayed in GIS format on the internet and are available to all users at fish.hd.kiev.ua.

The register is a “unified electronic database with complete information about all water bodies of Ukraine suitable for fishery activities, aquaculture and fish farming.” The main purpose of its launch is to “make a transparent database of the fishery sector that is simple and understandable for investors.” State Agency for Fisheries is the administrator of this registry. 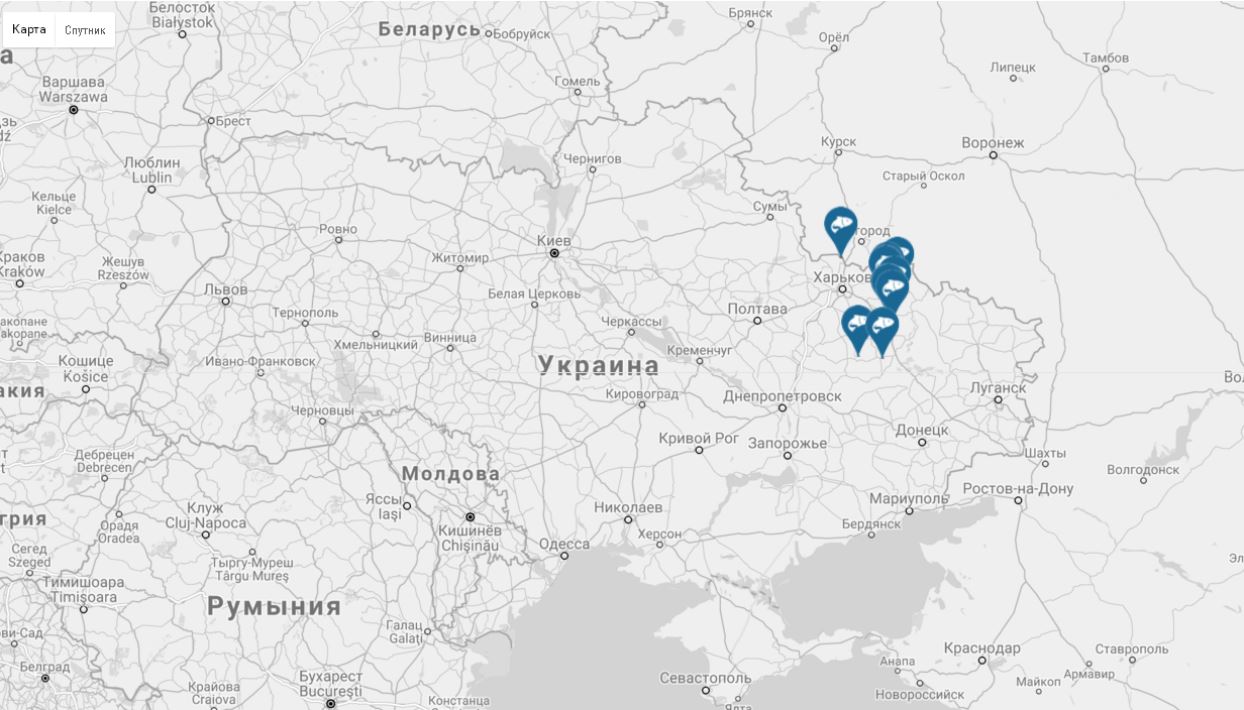 While the website of the registry is running in test mode, the absolute leader in information content in the database is Kharkiv region (see screenshot above). It is expected that registry will work at full capacity in 2017.

Information from the website is shown in the figure below. Pushing the “Rent” bottom will give an opportunity for the person concerned, to share contacts (phone number and email address) to enable communication with the agency. 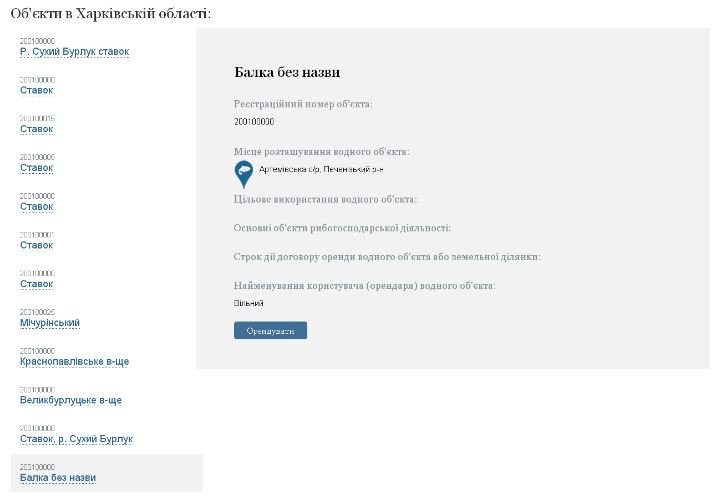 There is some similarity between the mentioned register and Public cadastre map of Ukraine, which comes from analyzing information about it. This similarity is restricted to cartographic representation of the administrative structure of the country, because information fullness of the cadastral map is much better. But with help of imagination, we can assume GIS integration of register with water cadastre, based on the web source described. At the moment, it is not possible to get public spatial information about objects of water cadastre.

When talking about public access to other state cadastres and registers, we have no reasons to be proud.

Perhaps urban cadastre can be considered as a leader in this field, the first portal to be presented was Kyiv cadastre, presented in 2013. General plan of the city, aerial and satellite imagery starting from 1943, and a range of cartography materials from Google service are its spatial basis.

This portal offers diverse useful information, such as restrictions of planning due to the general plan, boundaries of cadastral zones and land plots, objects of cultural heritage and zones of historical areas, public service objects, boundaries of detailed plans of territory, approved by the Kyiv city council, development program of urban planning documentation in Kyiv for 2014-2016, a comprehensive scheme of temporary structures and more. 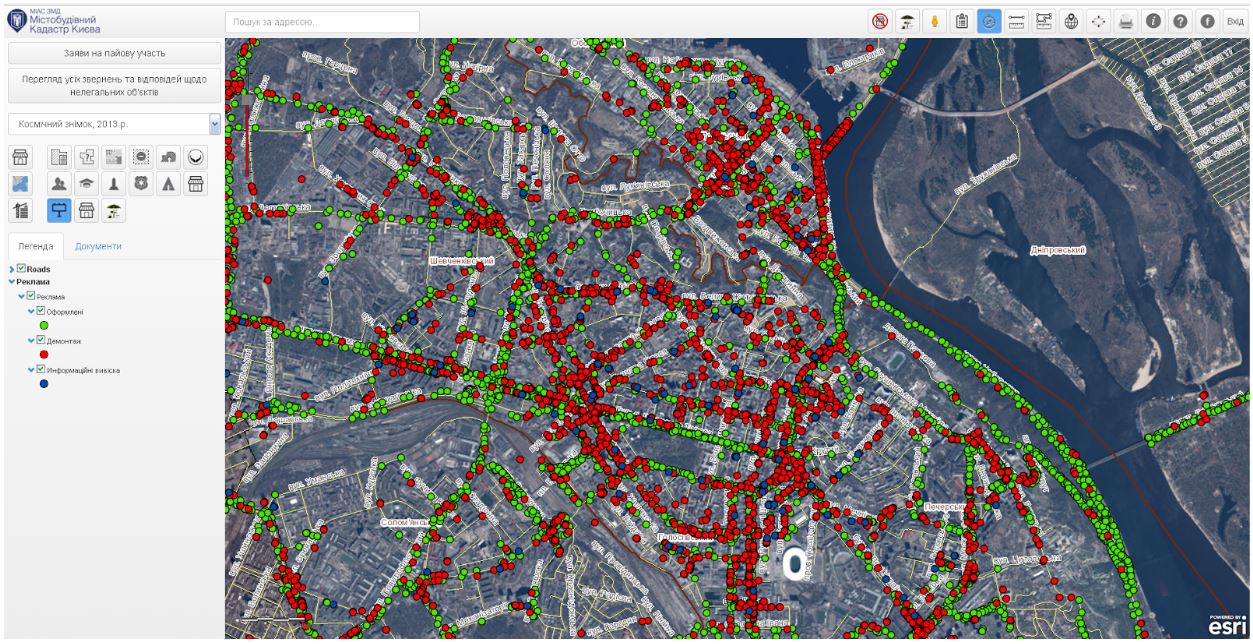 Location of advertising on the streets of Kyiv

Using this website Kyiv citizens can control status of any constriction, check the legality of temporary structures, etc. (but we should ask the residents themselves if it actually works). Now it is easier for businessmen to submit papers for a contract on equity and supervise case processing, it can be done directly on the website. 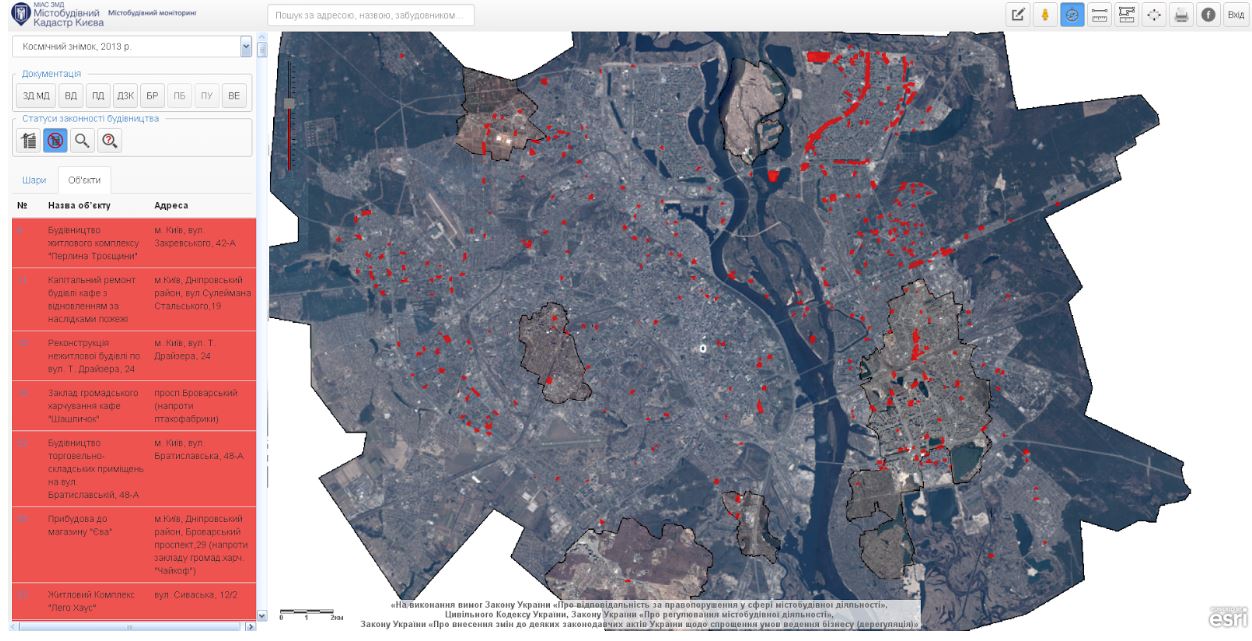 Objects with status of unlicensed construction

On the 19th of October 2016 a similar web portal of urban cadastre was presented for Lviv region. 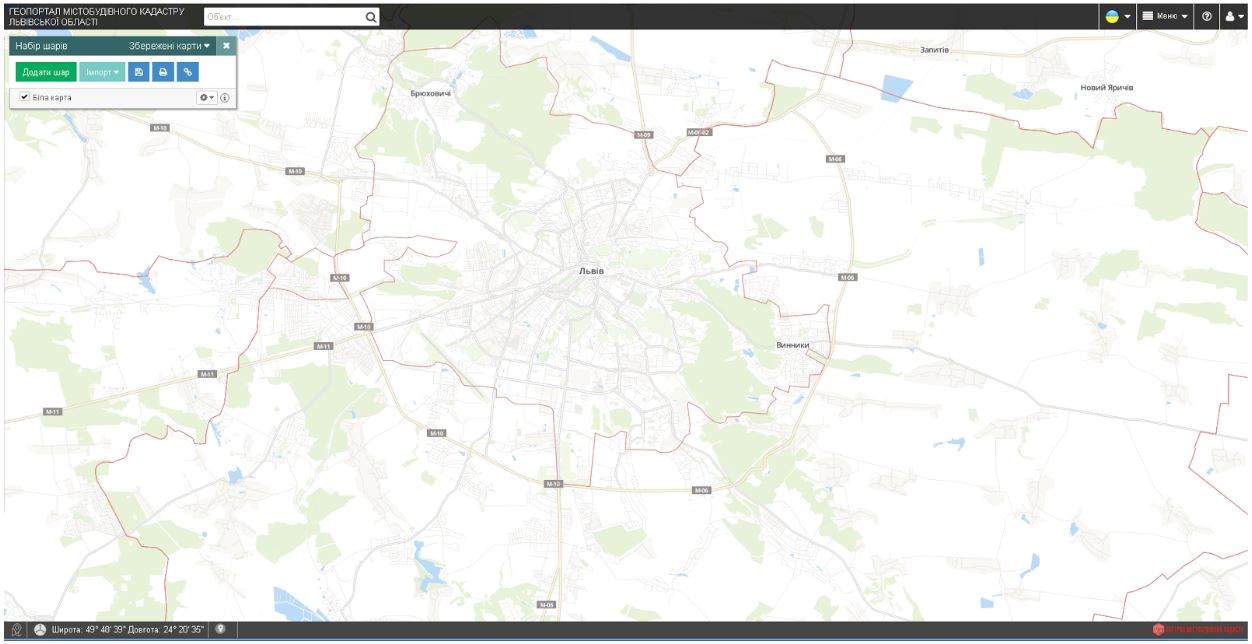 The work on the creation of other regional cadastres is in progress. So, in general, the process of geo informatisation is on its way.

But is it in the right line? Institutional system of conducting cadastral inventories is logical and typical for every country. And problems arise only at the turning point of technological era. Right now they are characterized by databases and geo information systems. At this time, slowing down the transition to new speedy tools will cost a lot in the literal and figurative sense.

So, is there a general concept of country informational field? Basically, the answer is ‘yes’.

Already in 2007, the State Service of Geodesy, Cartography and Cadastre first a developed draft concept of the Law of Ukraine “On national spatial data infrastructure” which was approved the same year on the 21st of November by the decree of Cabinet of Ministers of Ukraine.

This concept states that national spatial data infrastructure (NSDI) is “designed for the collection, processing, storage, distribution and efficient use of information about objects and phenomena identified in a particular system of space-time coordinates, which is directly or indirectly linked with location of theses objects on Earth”.
The main tasks of this Concept were:

To put it simply, NSDI should become a basis of creation, distribution and consumption of geographic information. This will allow improving the process of decision making and service delivery in many sectors. NSDI allows avoiding duplication in the data collecting, improves their quality and reduces costs, contributes to unification, spread and use of information.
The project even indicates expected economic incomes related to creating the single information space:

These numbers have their grounds. Experience in Australia shows that NSDI helped to create “spatial” industry with assets worth 1.4 billion Australian dollars, and contribution to GDP reaches 12.6 billion Australian dollars. According to research conducted in the EU, economic effect received by the organization members from creation of the spatial data infrastructure INSPIRE, is valued at more than 1 billion Euros per year.

Ukrainian experts do not consider NSDI as a “super base” that will be a result of state cadastre’s evolution, but as a “super integrator” of geospatial data, which will be created by both state and local governments, and by interested private companies. The results of this integration will be useful to the state institutions, as well as to the ordinary citizens.

NSDI should accelerate state processes at all levels:

According to some experts, there are no identical NSDIs in the world. Each state develops its own strategy of creating NSDI, based on experience of “geo progressive” countries.

Probably, the first national infrastructure of geo data was developed in the US. According to the order of US President William Clinton from April 13th 1994 the creation of National Geospatial Data Infrastructure (NSDI) had begun. Already in 2000, the program has been implemented fully. Result of the work is available to anyone at www.data.gov. This service integrates metadata from more than 160 000 sets of public data of 77 agencies and organizations, in total over 100 000 set are in spatial category. Another accessible source of the NSDI program is US Federal Committee on Geographic Data (FCGD) geo portal where one can find more than 80 000 sets of spatial data. To see current condition and perspectives of its development please visit the FCGD website.

An example of successful implementation of FCGD in the public sector is the most modern and actively operating portal of electronic land cadastre, the Danish Plansystem. It gives public access to all land use plans provided by the legislation, including municipal plans and development plans, which had already been approved and those, which are proposed.  This service gives citizens an opportunity to express their opinion about proposed development plans and to find out those problems they might face during the construction or expanding of their homes. 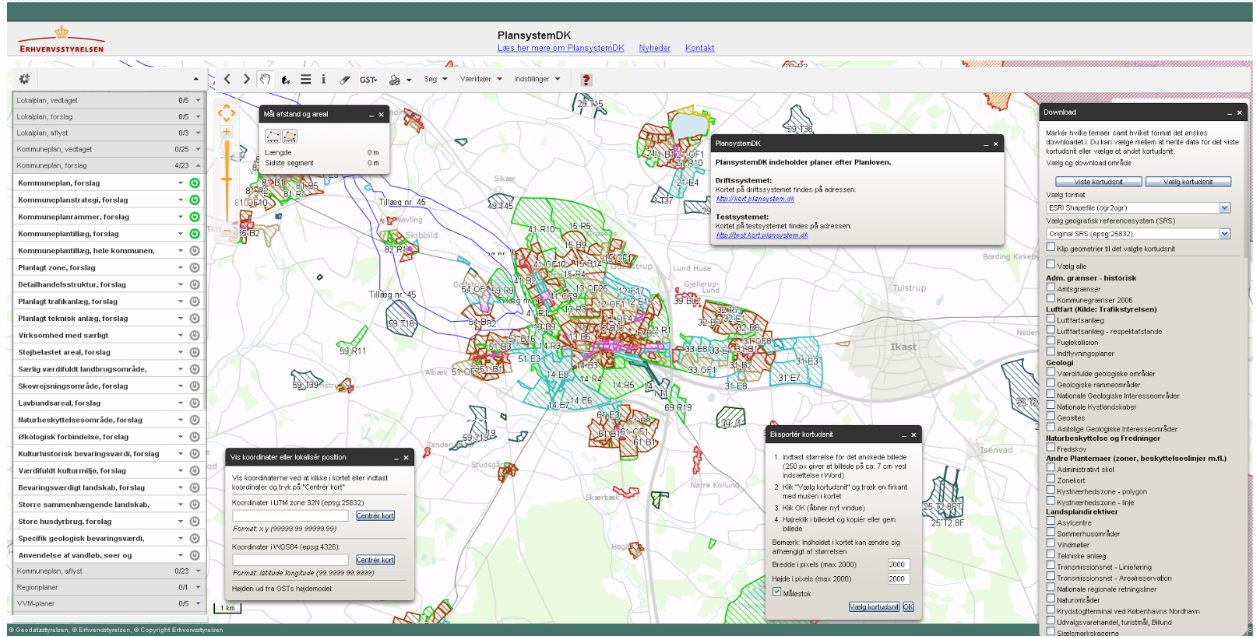 One more example of using open state geo data in the private sector are Zillow (USA) and Zoolpa (Great Britain). They represent spatial services in searching of real estate for purchase or lease. Services give customers information about market price of the objects and, apart from that, propose to choose range of professional and financial services at the time of signing the agreement. 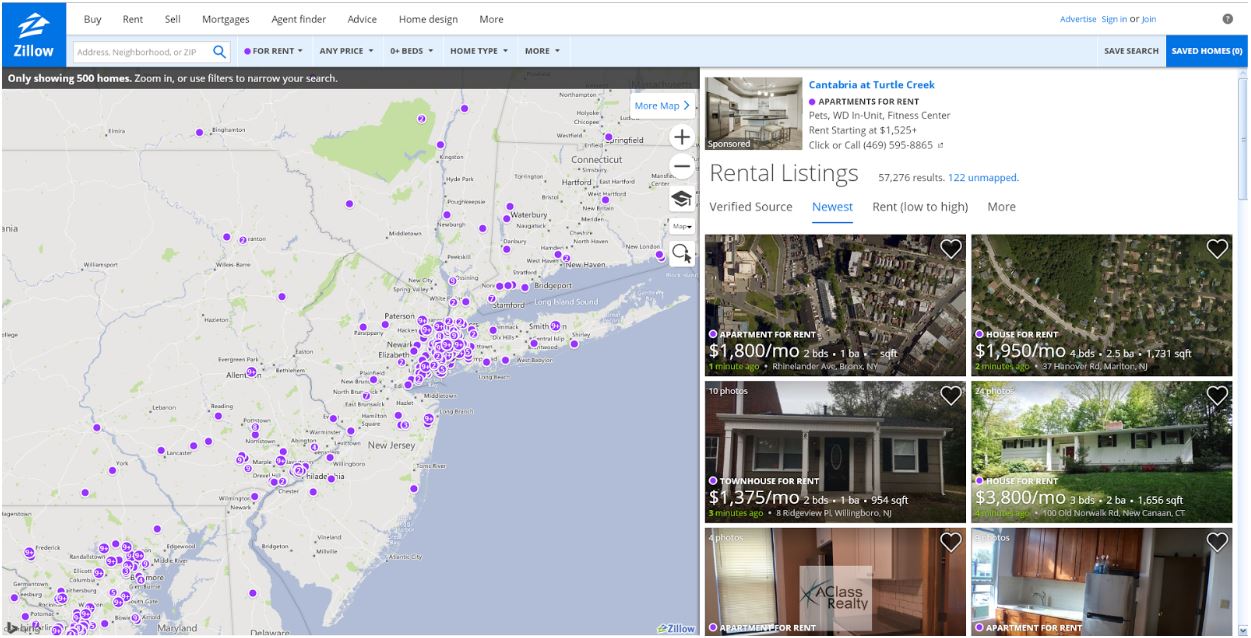 Illustration of the Zillow service

And what is the situation in our country?

A pilot project of NSDI has been implemented in 2013 for an area of 897 square km on the territory of Fastiv region (Kyiv oblast).

The main achievements of the project are:

Some of these points may seem questionable to experts, but let’s not be judgemental.

For specialists certain points of this list can cause questions. But it’s only the first try, better luck next time…

The results of this project became the basis of the draft Law of Ukraine “About spatial data infrastructure”; the second version is at the stage of discussion and revision. Information that one of the main tasks of this draft law is to avoid conflicts between agencies interests can be found on the internet.

Since September 2015 another pilot project is being implemented in Ukraine. It is called “Establishment of national geospatial data infrastructure in Ukraine”. The Government of Japan is the donor of the project through the Japan International Cooperation Agency. The State Service of Ukraine for Surveying, Mapping and Cadastre is the beneficiary. “Center of State Land Cadastre” is the recipient. Terms of the project implementation are two years. The aim of the project is to develop a NSDI prototype for territory of Vinnytsia city and Vinnytsia region. Also, it is planned to elaborate an operational plan of the NSDI system expansion to the whole territory of Ukraine.

At the moment the aerial photography of the pilot area is completed. Orthophoto maps are being made, basic set of geospatial data is defined for the prototype territory, a set of standards for geographic information is developed, and training courses for the work with data for Ukrainian experts are being conducted.

And the last thing. During the international seminar “Geospatial data infrastructure as a precondition for economic and social development of Ukraine”, which was held on 11-12 March 2016 in Kyiv, it was announced that in creating of NSDI Ukraine will provide EU standards provided by INSPIRE directive.

Infrastructure for Spatial Information in Europe or INSPIRE is an initiative of the European Commission since 2002. The aim of this initiative was to create a framework for the integration of geo data of EU countries and to ensure greater accessibility to them. INSPIRE is not intended to produce any new programs of spatial data collection. The initiative only provides development of effective tools for using available data and requires standardized documentations of spatial data in the form of metadata. It offers access to those services, ensuring data compatibility and removing obstacles to their use.

You can find out more from this video: