I guess everyone has watched the Christmas special of ‘Sherlock’. (You haven’t? Well, you ought to: British TV-series are sometimes just brilliant.) Can you remember Sherlock sitting in the lotus position mentally scrolling through newspaper clippings? Now, do the same trick (but no googling, mind you!) to find a desired page from the classical book on cartography where map features are described. Done? Okay, let’s move on.

Imagine a map as a human body: it has a bone structure (a mathematical basis), a muscle bulk (cartographic representation), skin, eyes, ears, in brief, the rest of the human body (the ancillaries). We didn’t mention the main thing – the brain. Without the brain one cannot walk up the stairs, smile, or take a selfie. For a digital map created with GIS- or CAD-tools, such a brain is the digital feature catalogue. It is the brain that determines either your map will be weak (like Samuel L. Jackson’s character from the coolest movie ‘Unbreakable’) or strong, and it will be beautiful (like Diane Kruger from Tarantino’s ‘Inglorious Basterds’) or not that much.

What are you talking about, man?

In fact, nothing complicated. But let’s agree upon the terminology right now. By a feature catalogue (FC) author means a set of vector map layers’ description, object types and their symbols, types of semantic (attributive) characteristics and range of their possible values – all represented digitally in a single command. It is necessary to distinguish the FC concept from the classifier concept: better to say, the classifier is implemented on paper as a standard or an instruction and the FC – with a digital file of a certain format.

The FC is a duo, from one side – the symbols for a certain scale (they exist generally in a legislative form: as, for example, topographical symbols which are issued by orders of the Ministry of Ecology and Environmental Resources of Ukraine), from the other – a corresponding “paper” classifier. It can often happen (very often) that certain technical moments in these two documents are not described at all or are described poorly, that’s why the operators add their own details to the FC when required. FCs differ with subject-matter (topographical, cadastral, navigational), scales, coverage (from international to solely local), encoding method, use conditions etc.

The classifier concept as such exists everywhere – the point is only in its formality grade.

It can be part of a system or a separate file (as in the “Panorama” GIS products line),

its elements can have different names (for example, in “Panorama” systems it will be semantics according to the code from the reference table and objects series, and in ArcGIS geodatabases – attribute domain and spatial objects’ sub-types),

be general or highly specialized,

be distributed freely or be developed specially for users.

That same OpenStreetMap tag system is a classifier in fact (fig. 1). 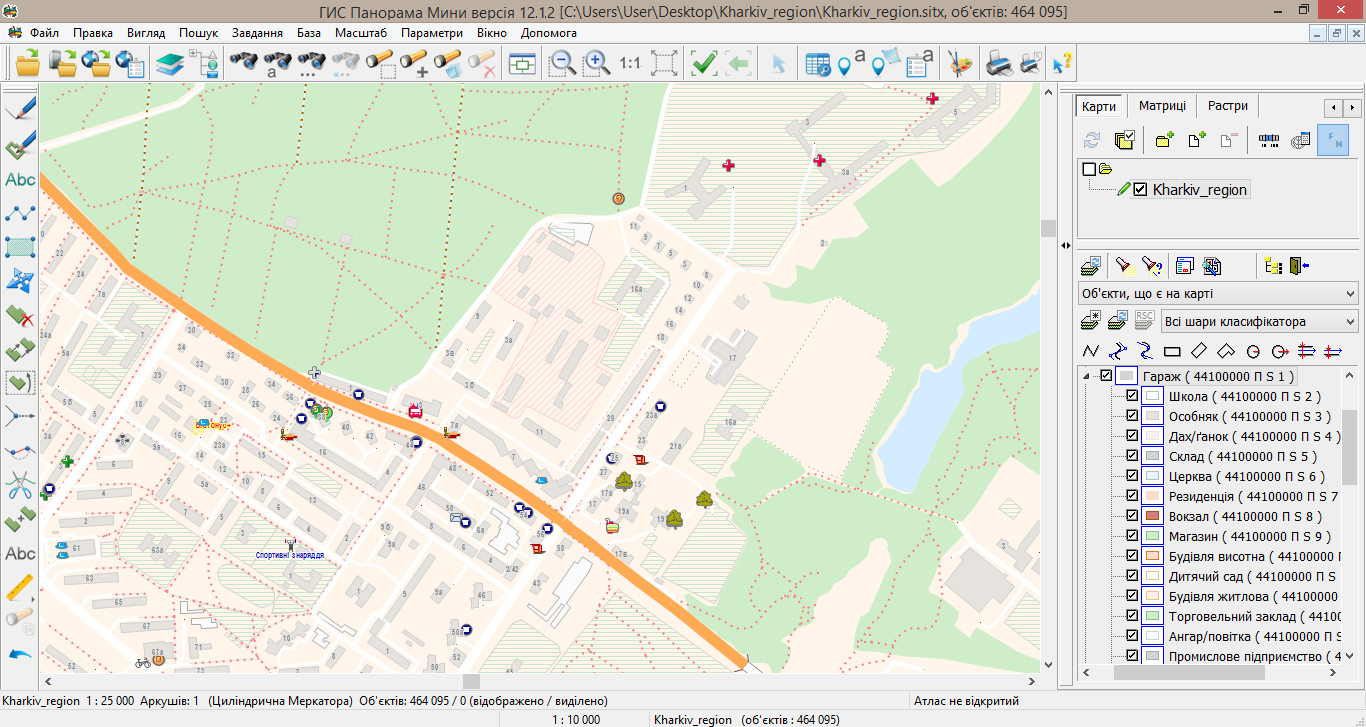 (1) unification of the process of making digital maps with different subject-matters,

They are basically connected with each other: if cartographers keep to the normative prescripts on data structure while making maps, although their further transfer from system to system won’t be easy, but they can essentially improve the operators’ lives. Problems during the data transfer arise almost always because of a number of reasons: from the peculiarities of software products to commonplace mistakes.

Feature catalogues worldwide and in Ukraine

And what is the situation with the normative classifiers? ISO CD 191 10 (15046-10) standard «Geographic information – Part 10: Feature cataloguing methodology» based on numerical-literal coding principle was internationally brought in as far back as 2001. For example, the object “Mine” (eng. “Mine”) received the code of AA010, and one of its semantic characteristics is “Geographical Location Accuracy” (eng. “Accuracy Category”) under the code ACC that can have ACC0 value (unknown value), AAC1 (accurate location), ACC2 (approximate location) or ACC999 (another value).

Some national cartographical authorities localized this ISO – just not to reinvent the wheel. So the first version of «Catálogo de Objetos Geográficos y Símbolos (COGS)» (I think the translation isn’t necessary) was introduced in 2013 in Uruguay. The object “Mine” (sp. “Mina”) has  the same code in it, the same list of the attributes and their values as in the international standard. But there are still some countries which in spite of the existing of the latter use their own approaches to FC creation. Since 2007, Brazil has its own specification «Especificações técnicas para estruturação de dados geoespaciais digitais vetoriais» (eng. “Technical characteristics of the structure of vector digital geospatial data”), that describes the objects in its own way: for example, the object “Dam” (port. “Barragem”) has the code of 1.09, and the codes of attributes are completely literal: semantics “Construction Material” (“matConstr”) has the values “unknown”, “brick”, “concrete” etc.

And what about us? We can’t call the situation critical – but it cannot be compared to the ideal. Two classifiers were brought in for topographical mapping in Ukraine:

As it is stated in themselves, “by the content, classifier is a systematized set of code symbols of terrain’s elements and objects, and attributes that characterize these features while displaying terrain information on topographic maps” (fig. 2).

Largely, these acts can be treated as a Soviet heritage. Essentially, they are the adapted versions of those old standards, and not quite good ones: when these documents are compared, there are collisions, something is missing, and something could be removed at all. Could you tell me for an example if you had ever seen a yurt in Ukraine? Or a chum? Or have you ever stood next to a suburgan or ovoo? Well, me neither. But all these objects are present among map symbols and classifiers – lying there dormant. For a while already, professionals have been stating the need to update these map symbols and classifiers of information.

And regarding thematic mapping the situation is rather poor. It has recently improved only in the city-planning cadastre. The State Standard of Ukraine DSTU B B.1.1-17:2013 ‘Symbols of the graphic documents for the city-planning documentation’ was adopted in 2013, and in November 2015, order #193 ‘On Approval of the List of Object Classes in the City-Planning Cadastre’ issued on 14.08.2015 by The Ministry of Regional Development, Construction, Housing and Communal Services of Ukraine came into effect. And that is all. Just imagine: this document (Ukr.) provides a list of types of information (35 positions) that respective authorities can exchange with each other while working with cadastres and informational systems. But sadly, there is no any unified approach, that would be at least potentially sustainable, to the organisation of the exchange process; not to mention how problematic it may be to get information from that list.

A paradox: being defined by all the laws as the basis for all other cadastres in Ukraine (almost ten of them) and developed in the most detail, the land cadastre still has neither its own symbols, nor corresponding classifiers. Not to mention other cadasters: at best, there are some scientific developments, and at worst – either Soviet standards – outdated and obsolete-, or there is nothing at all. The same regarding other kinds of thematic mapping: from land-planning to soil and geological surveys. And there may be intellectual assets to solve this problem (entire scientific research institutes), but it lacks the banal thing – the funds. And one just cannot hope for them to suddenly appear in the current economic circumstances.

It is true that nature abhors a vacuum. Even when there are no regulations for corresponding operations, during the development of their own software products or projects’ implementation, companies/institutes fill the vacuum with their own vision of the way out from this situation. And the work goes on anyway. It’s just the longer such an ambiguity persists, the more problems will arise when data is consolidated. And especially critical this issue will become during the set-up of the spatial data infrastructure, where crucial are the standards for the models of spatial data, geodetic equipment, coordinate systems, data formats, data exchange, metadata, data accuracy and quality.

As a Ukrainian band Mad Heads sang, ‘there is hope’. Cabinet of Ministers of Ukraine passed a resolution ‘On approval of the Project conception of the Law of Ukraine ‘On National Infrastructure of Geospatial Data’’ of 21.11.2007 #1021-p. In compliance with it in almost 9 years (sic!) the State Service of Ukraine for Geodesy, Cartography and Cadastre is going to lodge a draft law ‘On National Infrastructure for Geospatial Data’ this October-December. So, we will wait and see the result. Although it is still a long way off for technical details to be revealed…

P.S. A reader may reasonably ask: why did the author go that far writing about the basics, the problems and the present situation – what is it for? And I will give an answer: given a chance, author will tell about his own experience of creating a classifier of cadastral information, about the results and initiative appeals on this question to governing bodies. To be continued…