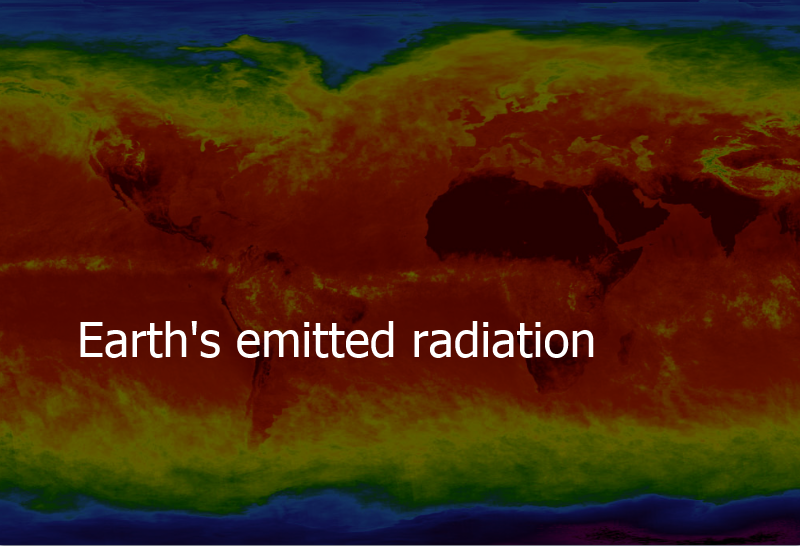 Bodies emit radiation. The warmer the body the more the emittance.
When we look at the Sun, or even feel it on our skin without actually seeing it, we definitely know that it emits radiation. Especially when we forget about sunscreen.
From Wien’s displacement law we can learn that the peak radiation of a black body depends on its temperature. Although, neither Sun nor Earth are true black bodies, this still is relevant.
So, the Sun being around 6000K warm emits radiation at a peak of about 0.5 μm.

And what about the Earth?

First, let’s find out about Earth’s temperature.
There are several factors at play when speaking of the temperature of our planet.
Firstly, the proximity to the Sun is key. Earth is located in the ‘Goldilocks zone’, habitable zone, near our star, not too close and not too far away.
Secondly, our atmosphere does a pretty good job at retaining the heat.

The average temperature of Earth is around 16°C.

Have a look at a picture below and compare the conditions our neighbour planets have to deal with. 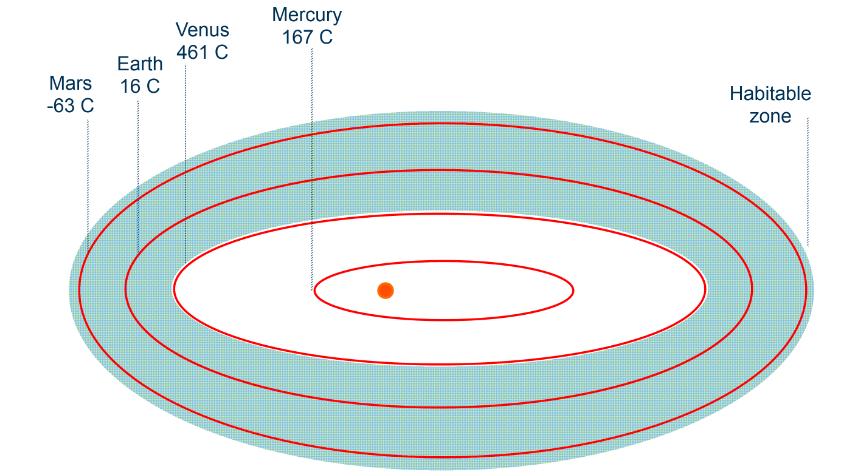 But why is Mercury so much cooler than Venus, even though it is much closer to the Sun?

In fact, the number given is an average. Due to Mercury’s lack of atmosphere the sunny and dark side temperatures differ greatly: 427°C and -173°C respectively. Whereas Venus has a thick atmospheric duvet that makes it the hottest planet in our system!

Ok, 16°C, nearly 290K, that’s great and all, but what do these numbers really represent?

In reality, the average of 16° differs significantly from local temperatures. The surface temperature extremes range from the lowest low of -89.2°C in Vostok polar station, 1983, to the highest high of 56.7 in Death Valley, California, 1913 (also featured in the latest season of True Detective).

The radiation emitted by the surface comes from several sources. First and foremost is the shortwave electromagnetic radiation transmitted to the surface. Around 45% of the radiation is absorbed by the features of the Earth’s surface and then reradiated at longer wavelengths.

Additionally, anthropogenic features, such as plants, or geothermal features increase the surface temperature of our planet.

The atmosphere then absorbs, retains, re-emits this long wave radiation. Only about 10% of the energy passes directly through the atmosphere.
“What about Earth’s internal heat?’ you ask.
Sadly, less than 1%. 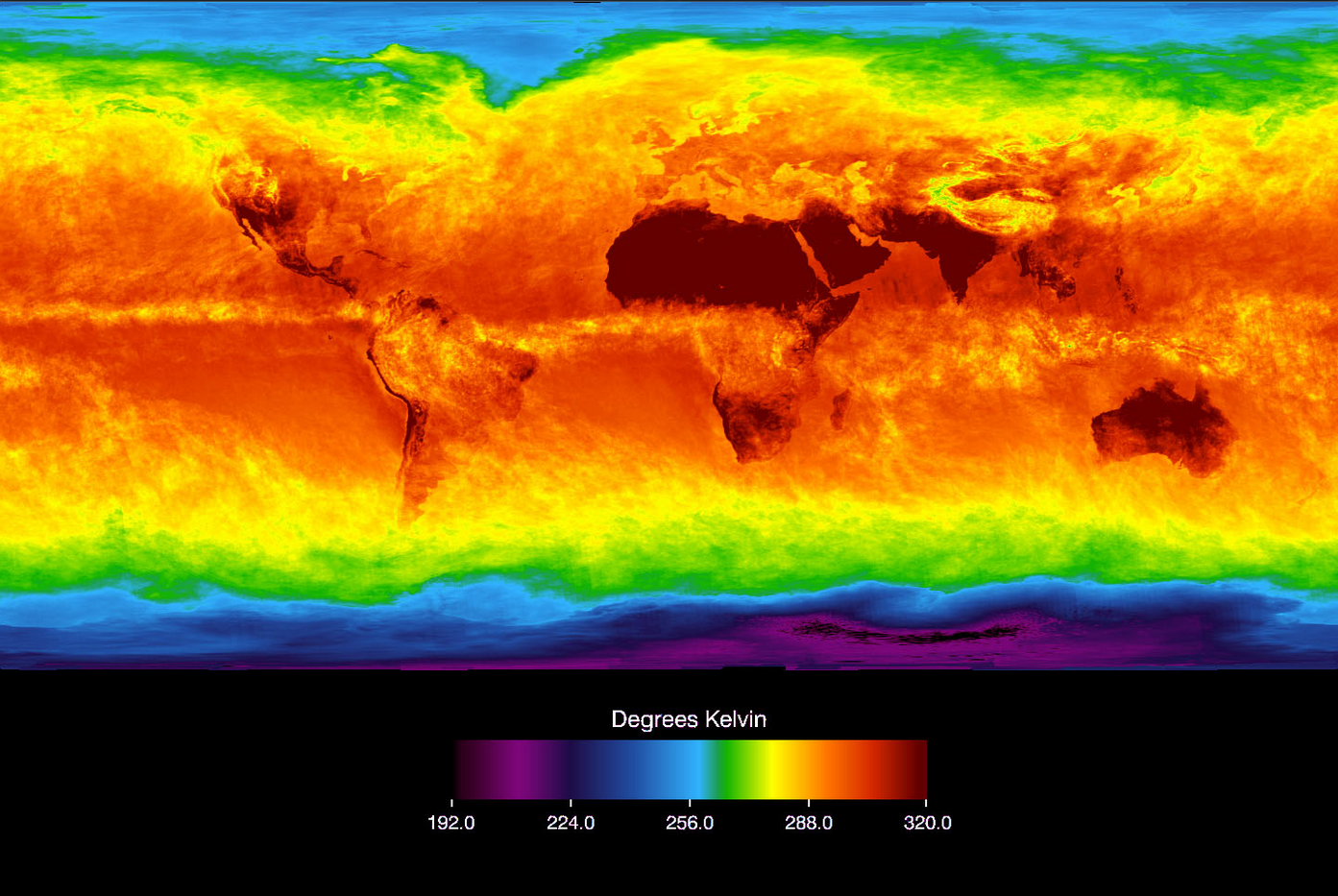 The Atmospheric Infrared Sounder (AIRS) instrument aboard NASA’s Aqua satellite senses temperature using infrared wavelengths. This image shows temperature of the Earth’s surface or clouds covering it for the month of April 2003. The scale ranges from -81 degrees C (-114 F) in black/blue to 47 C (116 F) in red.
The surface temperature places the maximum intensity of the Earth’s emitted radiation at 9.66 μm, in thermal infrared. From this point on there is little overlap with the solar radiation. 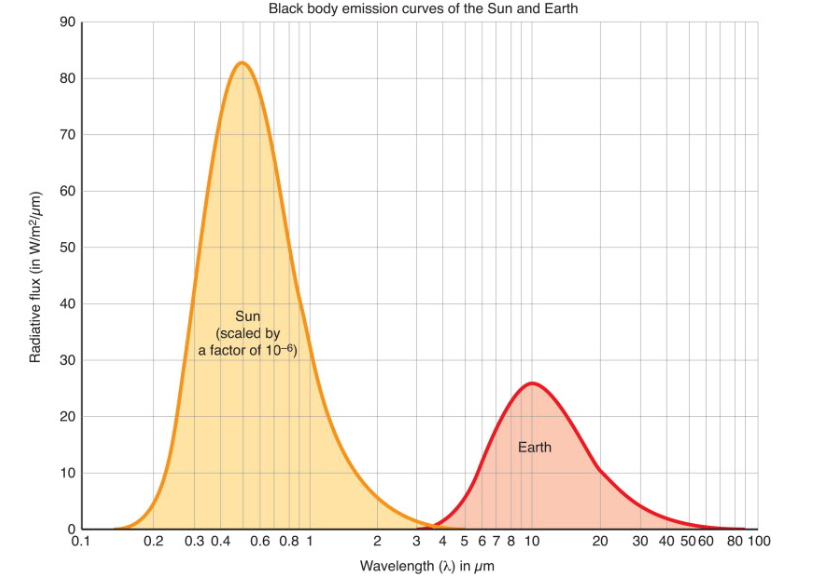 The atmosphere absorbs (see figure below for atmospheric absorption bands) a great deal of energy, which is consequently reradiated both into space and back to Earth. This process is crucial for heating the planet’s atmosphere. About 70% of radiation is retained this way. Then 20% of the energy is lost due to evapotranspiration and conduction/convention.

As mentioned earlier, only around 10% of the radiation emitted by Earth’s surface is directly transmitted through the atmospheric windows. These are primarily located at 8-14 μm. It is this radiation that is relevant for remote sensing.

Infrared sensors are also used for detecting temperature anomalies, such as fires. Fire has temperatures ranging from 500K to 1000K resulting in peak radiation at around 3.8µm, which is easily detectable against the background.

Mineral composite: ferrous minerals appear in blues, iron oxide in greens and clay minerals in reds; short wave infrared bands are used combined with visible and near infrared to detect mineral composition of the surface.