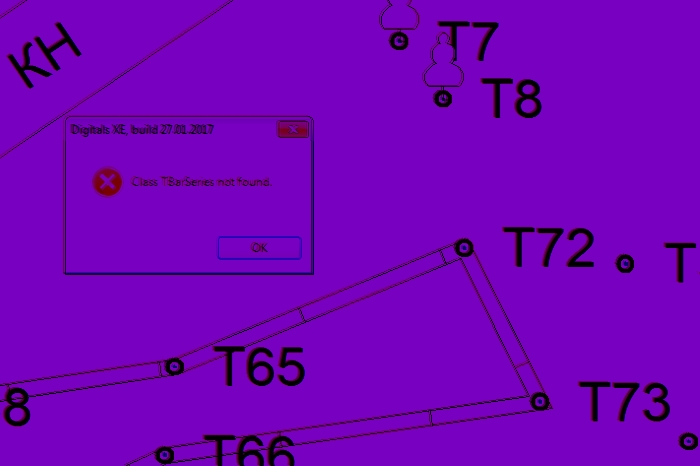 At the end of 2016, the university I teach in has purchased Digitals license. This software is used mainly by surveyors, and although the developers do not consider it a GIS, it is nowadays a very popular tool for spatial data processing in Ukraine. Previously I had never worked with similar software, as I mostly worked with ArcGIS and QGIS. So, I propose to see the programme that is used for “national land management” in our country with the eyes of a GIS specialist.

A few words about the interaction of GIS and land management

The field of land management in any country is closely related to GIS technologies. Moreover, often the needs of land management stimulate the development of GIS. Imagine that you need to organise and store information on millions of land parcels. Implementing such tasks at the appropriate level without the involvement of GIS capabilities will lead to real chaos in land relations of the country. And ordinary surveyors appreciate the benefits of digital technology compared to analogue tools, like pencils, drawing boards and calculators. Therefore, one of the classic examples of the use of GIS is related to storing information about land, creating topographical plans, making formal reports. All of these features are popular in most full-featured GIS (e.g., ArcGIS, MapInfo, QGIS) and widely used by surveyors in many countries.

This is all true for Ukraine, where GIS is actively used for managing land for over two decades. However, full-featured GIS, like ArcGIS, have not received much popularity. There are several reasons which include: the orientation of land management to a number of national government standards, that are not implemented in the software of foreign production, redundant features that are not needed by these users, and possibly low interest of GIS bands in software market of Ukraine. However, surveyors in Ukraine use the software products developed locally, that largely replicate the functions of GIS.

Of the entire set of such software, I can mention Invent-Grad, Heoproekt, GIS-6, and a number of extensions to AutoCAD. However, some of these programs are quite outdated (Invent-Grad was developed for DOS), some development ceased (Heoproekt), and some are just not very well spread. Digitals stands out on this list. Originally is was a simple tool for digitizing topographical plans, and eventually increased its functionality. Its capabilities cover not only the needs of land managers but also photogrammetrists, surveyors and cartographers. Of course, you can have a debate on the fate of Digitals on the market among similar programs and the number of its users (in the end, the choice of tool for every professional often depends on personal taste and habit). But as I was browsing surveyors’ professional forums and similar groups in social media, looking through university tutorials for training land managers/surveyors and communicating with fellow industry professionals, I made a conclusion that Digitals is the main working tool of Ukrainian land management.

On licensing and installation of Digitals

The first thing that makes Digitals stand out among other GIS products is the peculiarity of the license protection. Yes, it uses a special USB-key, confirming the product license. Licenses can be both individual and network (i.e. one key is used to run applications on different PCs). Also, the information on acquired expansions, like geodetic observations processing modules, orthophotos creation, automatic digitizing, is recorded in the key (Fig. 1).

This approach to protect the license, of course, is not unique and is widely used by many developers. Digitals key gets recognised by the operating system without any problems, and installing the license server and configuring it took less than a minute.

Figure 1.  Window showing available modules in Digitals
(yes, an ICQ number is indeed among the contacts)

Installing Digitals is even easier, or to be exact the installation as such is actually missing. You simply need copy file directory and run the executable file to install the software. This approach is again somewhat surprising by its simplicity (remembering all those cups of coffee drunk while contemplating ArcGIS installation process).

Installing Digitals on my work PC went without any problems. However, an attempt to do so on my home computer, as well as the lab PCs turned into failure because Digitals would not work with certain .net libraries and MS SQL Server. Here I had the opportunity to check the quality of Digitals tech support, which in addition to traditional phone works through Skype, Facebook or TeamViewer. A response via Skype was immediate and the staff were very professional. Unfortunately, they had not found the cause of the error, and the solution was to reinstall the operating system on fourteen PCs, then it finally worked.

We can, therefore, conclude that it is easy to install Digitals, but only if you have a clean system without “a million applications and libraries.” Besides, antivirus occasionally reports suspicious activity of the licenses client server and tries to lock it in quarantine, it is, of course, no big deal, but the overall impression is somewhat spoiled.

What really spoils my impression of Digitals is its interface. It seems that it remained unchanged from the first versions of the program when it was sketched by its developers themselves (or is it the case?). Of course, we can say that the appearance of buttons and menus is not too important for a for professional and a the more simple the interface the easier is to work with a program (like vim or FAR). But switching between windows of ArcGIS or QGIS (not to mention ArcGIS Pro and AutoCAD Civil 3D) and Digitals feels like switching from a modern speed train to an old regional one. The result is the same, but the trip seems quite different (Fig. 2). 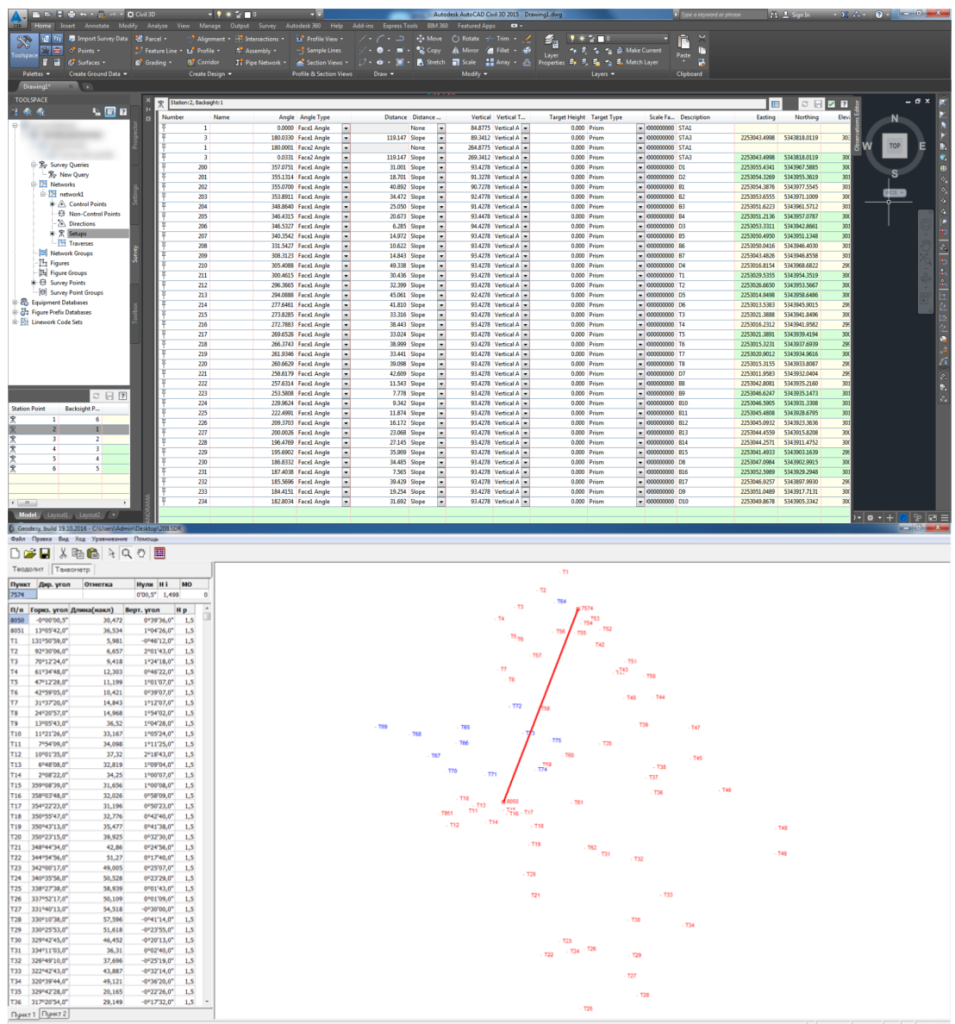 Another question is Digitals interface’s intuitivity and usability. The substantial part of the features of the program can be found by carefully reading the user guide or by accident. The last option is even more likely because Digitals cannot compete with QGIS or ArcGIS by the number of tutorials, and the official user guide is rather laconic. Together with the lack of contextual tips and masters, many of the software’s functions are actually hidden. For example, accidentally right-clicking on the tacheometric journal, I learned that this action changes the format of its view, however, there are no buttons, tips or visible UI elements to complete this action.

One of the most popular utilities is ‘Collect’ (although it is called Digitals XE in Windows menu). It is a powerful cartographic editor for building topographic maps (fig. 4). 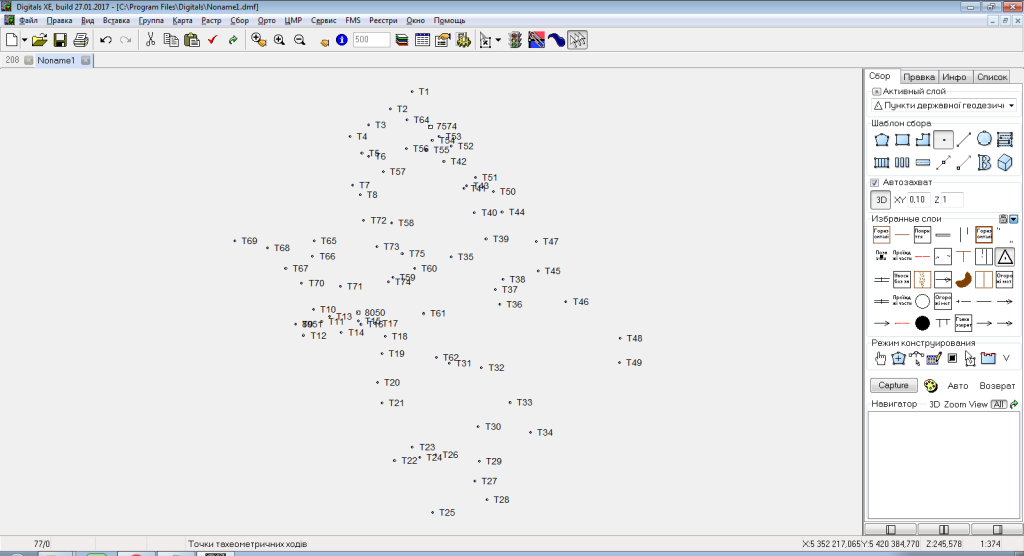 Unquestionable advantages of this editor are that it contains the symbology according to Ukrainian symbol classifier at different scales and a large number of instruments suitable for creating topographic maps. In addition, the program allows you to make surveying calculations, work with orthophotos, make inquiries to registers, calculate coordinate transformations. Moreover, it offers possibilities of building digital elevation models and creating contours automatically. It is no wonder why Digitals became the main working tool of many professionals who create topographical plans and are involved in land management in general.

Having little experience in topographic mapping in ArcGIS, I tried to perform similar work in Digitals. The workflow left quite a good impression. Calculating results of tacheometric survey went quickly, and the file of electronic observations was imported from the station without any problems. The process of topographical plan delineation (or collection, if we talk in terms of Digitals developers) went fast as well. All the necessary symbols were easily found, and the editing tools allowed to correct mistakes quickly. In the end, I was left with a feeling that I hadn’t used a tenth of all available features, and that after gaining more experience and I could do the work even faster.

It was slightly disappointing that some functions of the application did not work (e.g., downloading a web map), or gave system errors, or even lead to the program failure (for example, I did not manage to switch the interface to Ukrainian) (Fig. 5). Of course, some of these problems have simple solutions and do not occur when the users have more experience, but still, I would like to see the program a little bit friendlier, trying to explain what went wrong and how to fix it. 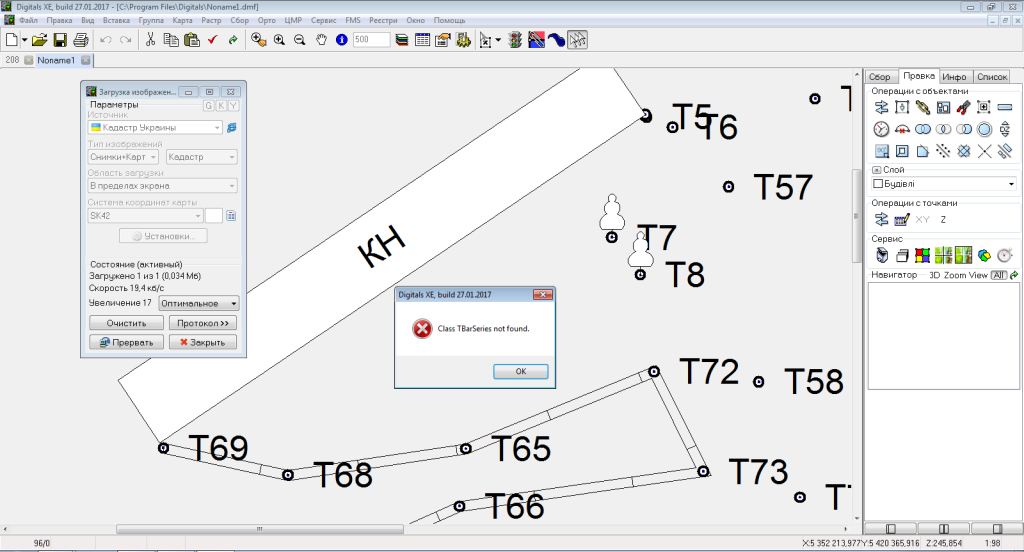 Figure 5. A plan fragment and an unexpected error

Of course, it is impossible to clearly and objectively evaluate the software, such as Digitals, after only several months of inconsistent use. Generally, I think that the basic principle of Digitals is to answer the need of national land management. That is why the developers do not try to compete with other GIS products but are rather trying to meet the needs of industry experts. On the one hand, this approach reflects positively on the functionality of the program. But on the other hand, the threshold of entry for newcomers and professionals with experience in other types of software is significantly increased.

The combination of poor interface and sparse documentation can make the daily work with the software unpleasant at first. So, if I get asked “Does an expert in land surveying need to be able to work with Digitals?”, I would say “Definitely, yes!” But if the question is: “Would you like to use Digitals, as the main tool for your work?”, the answer would be “No, no way!”

2 thoughts on “Digitals. Reviewing the main surveyor’s tool in Ukraine”