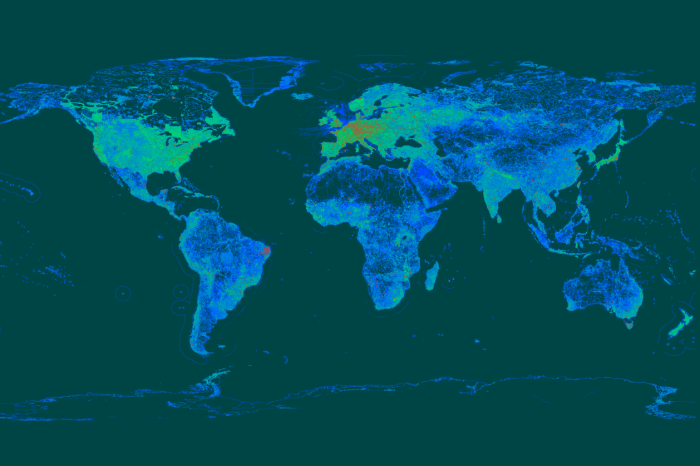 Why take part in OpenStreenMap project? Andrey Golovin, one of the famous Ukrainian osmers, was trying to help us figure this out.

You can read the first part of our conversation here.

At the beginning, the users understand the map as a graphical representation on the website. And they begin to draw. Copy anything they see in the satellite image. People treat is as drawing, creating an image. However, in reality they create data, a digital footprint of the world. The data in the form of coordinates, objects containing coordinates and attributes. Each object is characterized by position, area or point location, and has properties. The perception shifts from drawing to filling a database with new information. Adding objects with coordinates and properties, using them you can create a map, or use them otherwise. The graphic look is just one way to use geographic data.

Speaking of OSM project, the main idea is filling the geodatabase. That is, everything that we see in the world has a spatial component, and we want to make the data as detailed as possible.

If you go back to the beginning, to the idea of ​​OSM creation, to the first edits, the first data that appeared in OSM, they were based on GPS tracks. Then there was no satellite imagery or Google maps. When creating the OSM project Steve Coast started with the fact that the data provided by Ordnance Survey, cartographic agency in the UK, are all under copyright and have restrictions on use. He wanted to share his own data about interesting places with friends. And the first OSM data were plotted based on GPS tracks. That is the basis of OSM, not just the idea of ​​redrawing images, but gathering information on the ground, field research. And it is impossible to do fieldwork on the couch. It requires taking the GPS device, cycling or walking, driving a car, in order to record a journey, make records of routes, our digital footprint. Then you can check whether the route which we were moving on exists on the map. Compare the GPS track with the map, and add data, if necessary.

I would like to encourage all those involved in the OSM or planning to take part. It is not only about digitizing satellite images. It is necessary to travel! Make GPS tracks, refine the map. This is a useful thing not only for oneself but for others too. 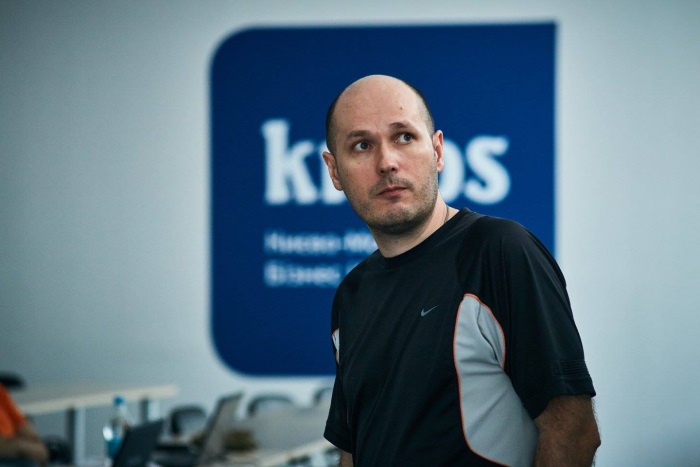 A few years ago, people [in Ukraine] were looking at volunteers with surprise: “Why are they doing it? What for?” While abroad there are a lot of famous volunteer movements helping out during disasters, in the fight against the illiteracy in developing countries and so on. I had read that students volunteer during vacations. Famous actors, artists are taking part in volunteering activities.

Now we see that volunteerism is an important component of social life. If we did not have volunteer movement, we would not have our country in the form it is today.

As it turned out, the volunteers can do amazing things, especially the volunteers who take part in OSM. We know of Humanitarian Openstreetmap Team. This is an OSM team that takes care of map creation for areas affected by natural disasters or to aid developing countries.

For example, they participated in a project to create maps for the aftermath of the Haiti hurricane. As it turned out, commercial organizations and government agencies lacked detailed maps to the affected areas. Coordinated by HOT nearly in a week, volunteers from around the world created a map of Port-au-Prince and surrounding areas from scratch in OSM, it was used by the organizations that provided assistance the victims. Digital Globe and Airbus had provided up-to-date satellite imagery for free.

Significant work by HOT is being done in mapping of developing countries. Not all states have funds to allocate for maintaining their maps in good condition. Whereas maps can help people draw conclusions, make decisions to improve the lives of people in these countries.

OSM in the world is developed unevenly. The most detailed map coverage is in Germany and European countries. Britain, as the birthplace of OSM, also has good coverage and a very active community. The US have good coverage too. But in some places OSM is not very detailed or inaccurate.

Compared with other regions, Ukraine is somewhere in the middle. We do not have so detailed map, but currently we have a good map, even compared with European countries (if we look at quality, not quantity). But, of course, there are flaws.

Yes, there are problems, but they relate to almost all regions. For example, the absence of address data in the OSM. 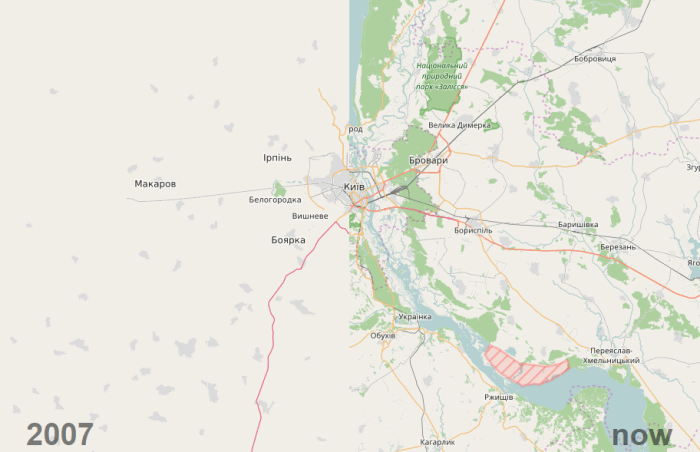 What does the state of OSM tell us about a specific location?

From my observations the state of OSM depends on the wealth of citizens of these countries. If people have some fortune, available funds, the people also have free time to spend the money.

Even amateur cartography, that OSM is, is rather expensive. It requires at least a computer. The essential component. People in poor countries who can not afford a computer, a priori can not take part in the creation and filling of the map for themselves.

The second component – devices for data collection. Not so long ago, little time passed from the moment we got smart phones equipped with GPS devices. 3-4 years ago I remember a splash in navigation device market in Ukraine. Those various navigation devices are primarily designed for drivers. Let alone the navigation device. You must have a means of transportation. A car or a bicycle.

If people do not have the funds for a normal existence, they have no money for a hobby. They need to spend more time to earn. All this leads to the fact that in poor countries, people have no time for hobbies.

For most participants, OpenStreetMap is a hobby.

Therefore the quality also depends the free time and free time depends on the prosperity of people in the area. People have free time, their fortunes allow them to spend time on their hobby.

Speaking of consumerism and activism. Why does anyone want to do mapping?

Some only consume, while others make their contribution to the development.

If we take, for example, Belarus, the driving force of the OSM community there were cycling clubs. Those who travel by bicycle needed maps.

Some participants of these clubs took various routes. People liked some route and they wanted to repeat the trip, or tell others about it. Of course, they can make a note describing the route. But it’s uncomfortable. And if it is 50-100 km, it is difficult to keep it in mind or move, while reading a piece of paper. And so, exploring the territory, creating tracks their travels improve the map, but also find new places in well-known areas. Studying familiar areas, one can find a lot of interesting information about the environment.

What is missing from our OSM community in Ukraine to develop further?

First of all, it lacks cohesion. And some driving force that would be able to unite the disparate community members in one organization.

Unfortunately, at the moment, OSM in Ukraine is a well known thing for a narrow audience. If each participant of the OSM community added information to the map, but also told others about this free project, more people would use it, and maybe wish to make efforts to improve it.

It’s not necessary to participate in a long term. Most of the two million registered mappers made a small number of edits to the map. Tagged the data that they are interested in or important for them. Did a useful thing for themselves and had helped others learn new and useful information.

Also in Ukraine, we need a wider coverage of the project. It would be nice if the state institutions had widely used OSM in their own work. I know a very good example in using OSM: the use of OSM maps by Kharkiv police on the portal police.kh.ua.

Another interesting experience: Lviv municipal administration have created a portal that uses OSM map to indicate the use of budget funds allocation.

The more open is the government, the more open data may be used by NGOs, the better for the OSM project. No need to spend money on map content, purchase commercial products, the work of volunteers who create the map can be used. I hope that the users of these portals can see that the map can be improved, and that they can make a good service for the community.

OpenStreetMap data belongs to no one. OSM Foundation takes care of the maintenance of the project, but does not own the data. It is the community, each mapper that contribute to the data. No one can prohibit the use of the data in any way. There is only one requirement – the indication of the origin of the data project and its participants.

The perfect future of OpenStreetMap

A large number of participants, OSM is as famous as other mapping services like Google, Here, Yandex, Navitel and others .. People participate in OSM to maintain the relevance of the data.

Changes in real life take place very quickly, and are mapped with a certain delay. I wish more people took part in the maintenance of up-to-date data. That’s the goal I have. Even spending a lot of money, companies such as Google, Here, TomTom .. still can not penetrate into every corner of the world. Only through user participation, the data can be improved.

Do not be just a consumer, you need to consume and to give back, contribute to the development of the products you use.

Even someone who made 2-3 edits contributed to improving the map.