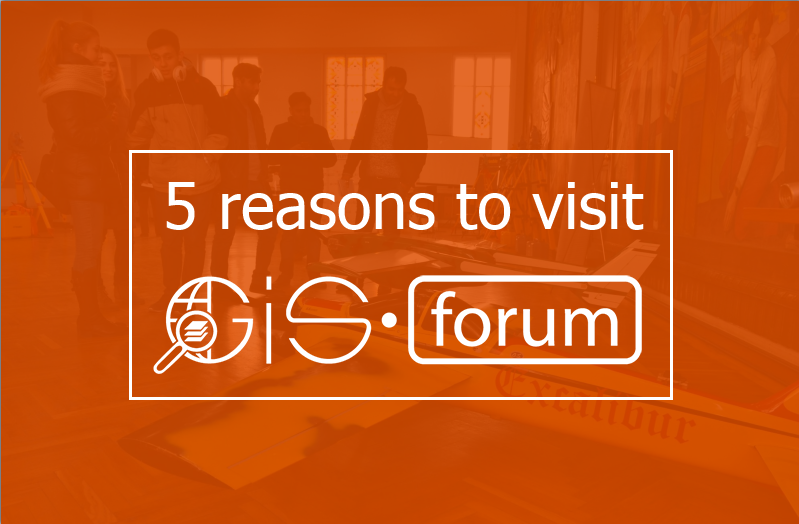 GIS-forum, a platform for geo related communacation, took place last week in Kharkiv, Ukraine. Here is a short review by Yaroslav Smirnov telling mostly about the atmosphere of the event.

GIS-forum 2016 has ended and I am writing this post on a train that slowly but steadily heads West from the East. As the overwhelming majority of people interested in GIS I’ve known about GIS-forum from the moment it had been founded (i.e. since 2012). But there has always been a bunch of reasons (in fact, excuses) why visiting it wouldn’t just work out. This year though I had successfully fought the shameful wish of sitting at home and at last decided to get myself together and set out to Kharkiv.

After the forum had ended I realized that what I lacked in previous years was the final motivation to visit it.

So let this post be ‘a letter to the future’ for all those who will be doubtful whether to take part in GIS-forum next year(s) (as for me, I am visiting GIS-forum 2017 for sure).

The first reason to visit GIS-forum may as well be the last one, just because if you are interested in GIS and not willing to go abroad – there’s simply no alternative to the Kharkiv forum. Of course, there are a number of conferences in geography, cartography, and geodesy with individual GIS sections; there are events held by GIS companies, formal and informal GIS user meetings. Still, all these events are quite highly dedicated. At GIS sections of conferences reports presented use some GIS-analysis in the best case (and in the worst case – there is just some sort of a map). Conferences held by GIS companies for obvious reasons tend towards products and solutions promoted by these companies, and often they look more like promotion actions (which they are, as a matter of fact). Despite their exceptional usefulness, GIS user meetings are quite short and cover some specific details of GIS technologies or projects.

GIS-forum combines all the events mentioned and shifts them to the whole new level. This is explained by the gathering of academia as well as the professionals, and everybody else who uses, develops, sells, teaches or just takes interest in GIS. So, a dialog starts there, covering all stuff that is GIS. Thanks to its duration (4 days this year), diversity of participants and a competently arranged schedule, GIS-forum in fact becomes a single large-scale event dedicated entirely to GIS technologies in their various forms. 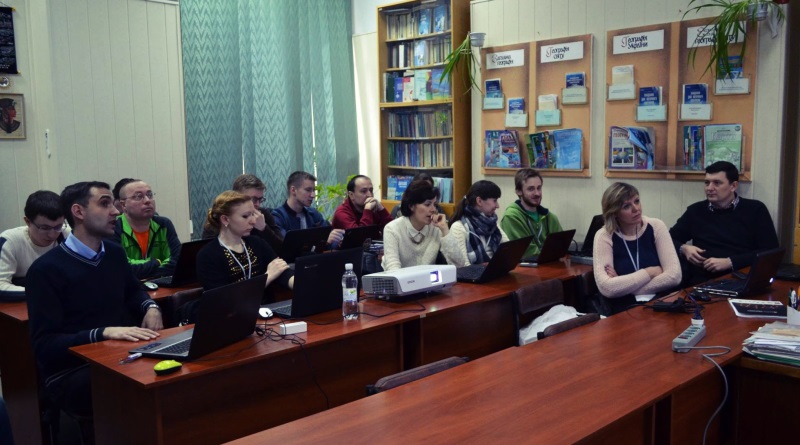 This year eight workshops have been held during GIS-forum. And I can hardly imagine the registration cost in case these workshops were carried out as a single commercial event. For authors of workshops were the true industry leaders (how else can call core QGIS developers or one of the main OSM Ukraine moderators?).

Moreover, workshops I’ve visited had exceeded my expectations as there had been not just mechanical demonstration of how to work with software (you can watch that on YouTube as well), but there included rather lively dialogues with the presenters. That is what most often lacks during new software study and there are no video tutorials, user guides or skype conferences that would compete with a possibility to poke a finger into the screen and to ask: ‘And this thing, what does it do?’.

Next year I personally would like to visit even more workshops. As it is extremely interesting to watch a presentation on teaching practical GIS classes on the Education day (GIS-forum is divided into three days: Production, Science, and Education). As it is one thing to listen to the methods of teaching in a report, and quite another – to experience them personally. 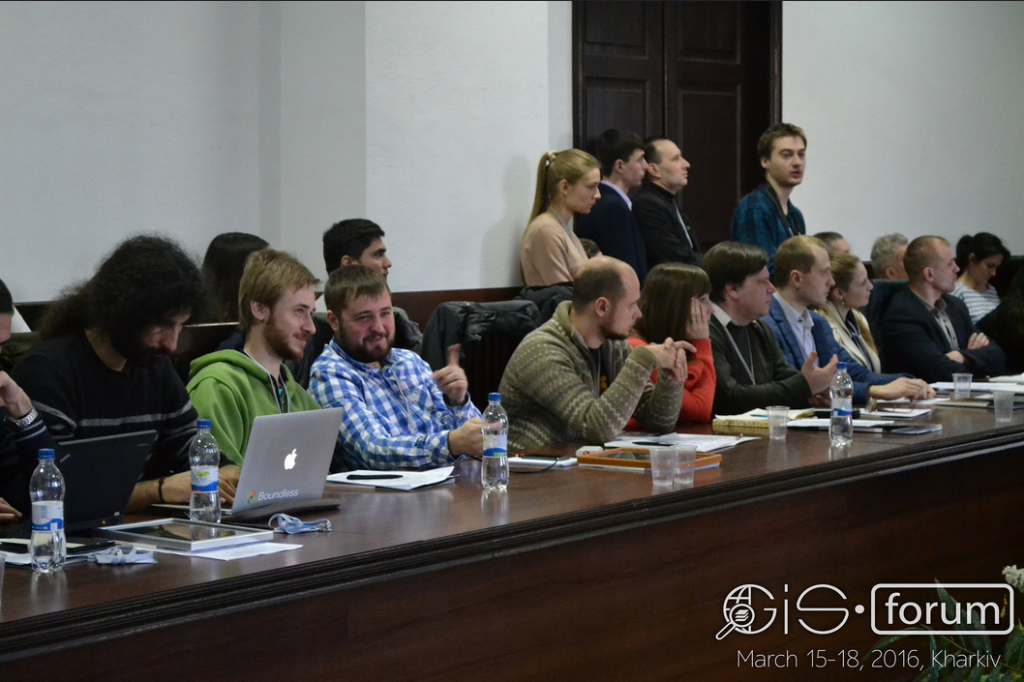 GIS industry is relatively young – both historically and in question of people involved in it. Accordingly it is typical for GIS sphere as a whole, and especially for GIS-forum, that grass root communication is more used than vertical. Put simply, someone with ‘GIS-god’ status can be sitting next to you, while in some ‘more respectful’ sphere that person would be sitting on a high tribune of the presidium and at best drop a few words during the plenary section. And here having minimal experience level you have a possibility to start a conversation, to come up to a person and torment them with questions that wouldn’t be that easy to google. And GIS-forum’s magic is revealed in the fact that instead of trying to escape all the dilettante questions, a person will start answering them and even proposing their help in solving your problem. 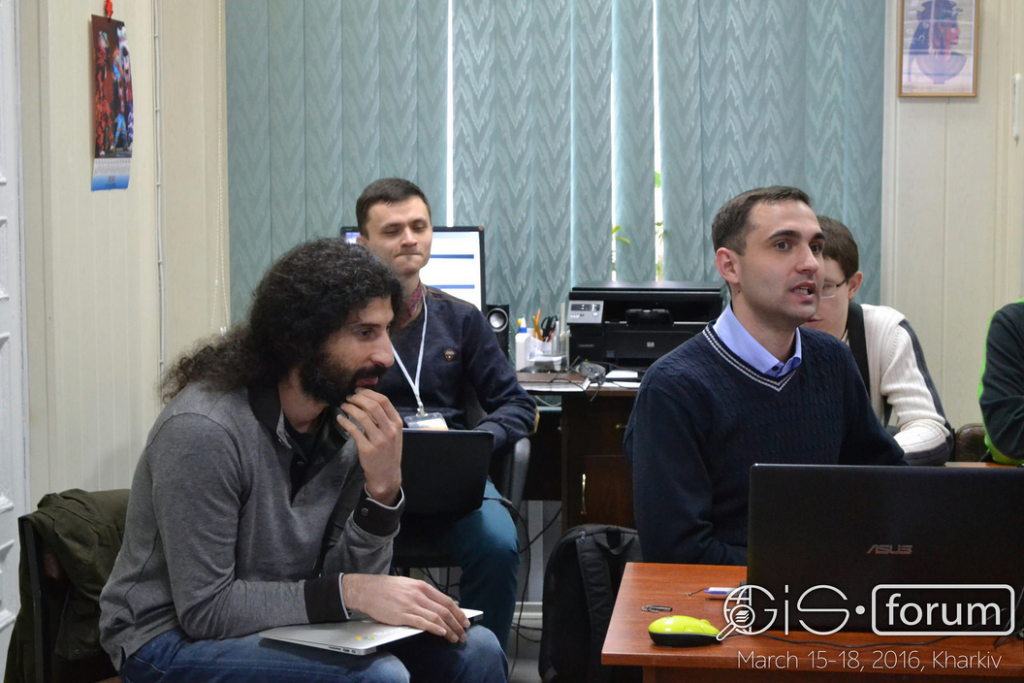 The people, who think that to hold a conference is of not more complexity than just gathering money and printing out badges, probably had never organized anything more complicated than a beer meetup. Work done by the GIS-forum organizers can be called nothing but titanic. Geodetic equipment exhibition, lectures, workshops, GIS projects contest, GIS specialists competition, round tables, video conferences, – and this is an incomplete list of forum’s activities! And now think of the need for participants’ registration, various hand-outs preparation and assisting guests in finding proper lecture rooms in the complicated planning of V.N. Karazin University. Adding this up you’ll see that organization of such type of event like GIS-forum can compete in its complexity with organization of a wedding for 300 guests in a house undergoing renovation works and located not far from an active volcano.

But forum’s organizers did an excellent job: lectures started on time, people weren’t lost in the university corridors, videoconferences were broadcasted, and round tables didn’t go into pointless exercises in speechcraft. Of course, forum’s schedule eventfulness caused at times pain nearly physical, as it was very difficult to choose between a lecture by a person I have long wanted to hear live and a workshop on the subject I have recently become interested in. But here I’ve been saved by an insight: ‘How wonderful it is that all that was missed can be later watched on YouTube’ (and yet again, it tells us something about the level of organization). Therefore GIS-forum in whole can be in fact named a single large workshop held for four days on how to hold a conference. 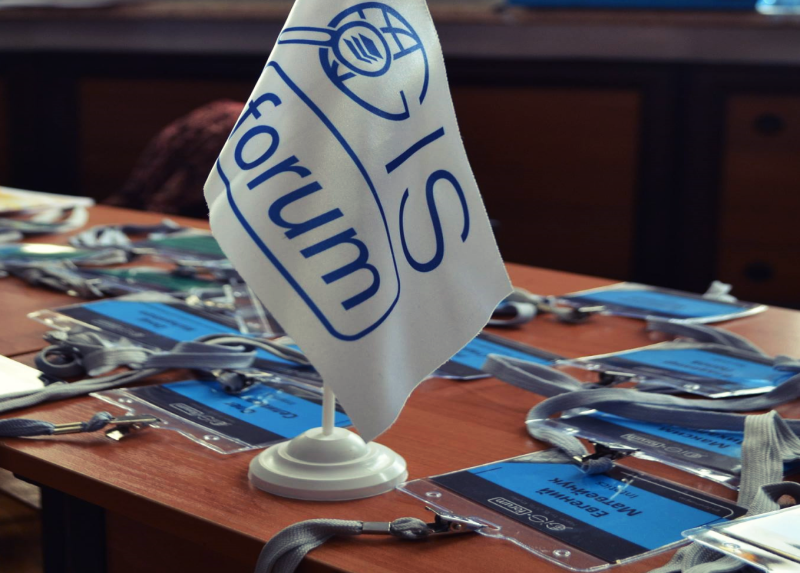 5. Kharkiv as a host city

The last one, but definitely not the least of reasons to attend GIS-forum is the location. Visiting Kharkiv for the first time I was impressed by the proportions of the city and the vitality and enthusiasm of its inhabitants. As my hostel roommate told me: ‘Kharkiv is a place of power’, and I totally agree with him. All these Kharkiv’s qualities fit for the whole GIS sphere as well and therefore despite my tender sentiment for Kyiv, L’viv, Odesa, Chernivtsi, and dozens of other beautiful cities, it is Kharkiv that suits best to hold the main GIS-event of the year. It can even be said that Kharkiv besides being called ‘The First Capital’ had become a GIS-capital of Ukraine (which is even hinted by the name of this blog).
And of course this list of reasons to visit GIS-forum is far from being complete. But I suggest you go there and find out other reasons yourself. In order to do that you will have to plan a trip to Kharkiv next March though 😉 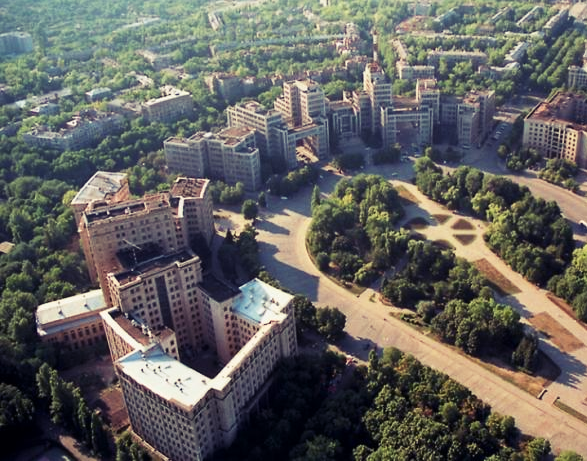